TIME TO GET CRAZY 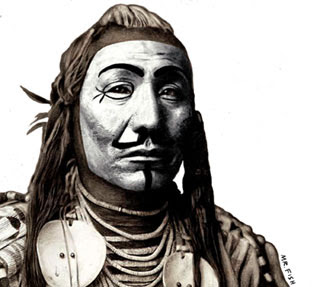 By Chris Hedges
July 2, 2012
Native Americans’ resistance to the westward expansion of Europeans took two forms. One was violence. The other was accommodation.
Neither worked. Their land was stolen, their communities were decimated, their women and children were gunned down and the environment was ravaged. There was no legal recourse. There was no justice. There never is for the oppressed.
And as we face similar forces of predatory, unchecked corporate power intent on ruthless exploitation and stripping us of legal and physical protection, we must confront how we will respond.
The ideologues of rapacious capitalism, like members of a primitive cult, chant the false mantra that natural resources and expansion are infinite. They dismiss calls for equitable distribution as unnecessary. They say that all will soon share in the “expanding” wealth, which in fact is swiftly diminishing.
And as the whole demented project unravels, the elites flee like roaches to their sanctuaries.
. 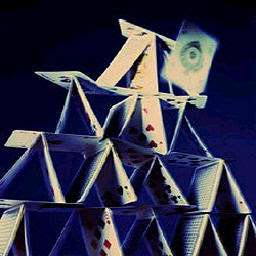 At the very end, it all will come down like a house of cards.

Civilizations in the final stages of decay are dominated by elites out of touch with reality.

Societies strain harder and harder to sustain the decadent opulence of the ruling class, even as it destroys the foundations of productivity and wealth. Karl Marx was correct when he called unregulated capitalism “a machine for demolishing limits.”
This failure to impose limits cannibalizes natural resources and human communities. This time, the difference is that when we go the whole planet will go with us.
Catastrophic climate change is inevitable. Arctic ice is in terminal decline. There will soon be so much heat trapped in the atmosphere that any attempt to scale back carbon emissions will make no difference.

ExxonMobil, BP and the coal and natural gas companies ~.like the colonial buffalo hunters who left thousands of carcasses rotting in the sun after stripping away the hides, and in some cases carrying away only the tongues ~ will never impose rational limits on themselves.
They will exploit, like the hustlers before them who eliminated the animals that sustained the native peoples of the Great Plains, until there is nothing left to exploit.
Collective suicide is never factored into quarterly profit reports.

Forget all those virtuous words they taught you in school about our system of government. The real words to describe American power are “plunder,” “fraud,” “criminality,” “deceit,” “murder” and “repression.”

Those native communities that were most accommodating to the European colonists, such as the peaceful California tribes ~ the Chilulas, Chimarikos, Urebures, Nipewais and Alonas, along with a hundred other bands ~ were the first to be destroyed.
And while I do not advocate violence, indeed will seek every way to avoid it, I have no intention of accommodating corporate power whether it hides behind the mask of Barack Obama or Mitt Romney.
At the same time, I have to acknowledge that resistance may ultimately be in vain.

Yet to resist is to say something about us as human beings. It keeps alive the possibility of hope, even as all empirical evidence points to inevitable destruction.
It makes victory, however remote, possible.
And it makes life a little more difficult for the ruling class, which satisfies the very human emotion of vengeance.
“Whenever the legislators endeavor to take away and destroy the property of the people, or to reduce them to slavery under arbitrary power,” wrote the philosopher John Locke, “they put themselves into a state of war with the people who are thereupon absolved from any further obedience.”

The European colonists signed, and ignored, some 400 treaties with native tribes. They enticed the native leaders into accords, always to seize land, and then repeated the betrayal again and again and again until there was nothing left to steal. 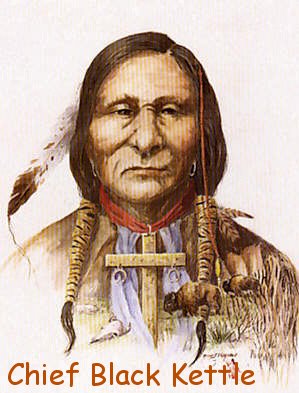 Chiefs such as Black Kettle who believed the white men did not fare much better than those who did not. Black Kettle, who outside his lodge often flew a huge American flag given to him in Washington as a sign of friendship, was shot dead by soldiers of George Armstrong Custer in November 1868 along with his wife and more than 100 other Cheyenne in his encampment on the Washita River.

The white men “made us many promises, more than I can remember,” Chief Red Cloud said in old age, “but they kept but one. They promised to take our land, and they took it.”

Native societies, in which people redistributed wealth to gain respect, and in which those who hoarded were detested, upheld a communal ethic that had to be obliterated and replaced with the greed, ceaseless exploitation and cult of the self that fuel capitalist expansion.
Lewis Henry Morgan in his book “League of the Iroquois,” written in 1851 after he lived among them, noted that the Iroquois’

“whole civil policy was averse to the concentration of power in the hands of any single individual, but inclined to the opposite principle of division among a number of equals. …”

This was a way of relating to each other, as well as to the natural world, that was an anathema to the European colonizers.
Those who exploit do so through layers of deceit. They hire charming and eloquent interlocutors.

How many more times do you want to be lied to by Barack Obama?
What is this penchant for self-delusion that makes us unable to see that we are being sold into bondage?
Why do we trust those who do not deserve our trust?
Why are we repeatedly seduced?
The promised closure of Guantanamo.
The public option in health care.
Reforming the Patriot Act.
Environmental protection.
Restoring habeas corpus.
Regulating Wall Street.
Ending the wars.
Jobs.
Defending labor rights.
I could go on.

There are few resistance figures in American history as noble as Crazy Horse.
He led, long after he knew that ultimate defeat was inevitable, the most effective revolt on the plains, wiping out Custer and his men on the Little BigHorn.
“Even the most basic outline of his life shows how great he was,” Ian Frazier writes in his book “Great Plains,” “because he remained himself from the moment of his birth to the moment he died; because he knew exactly where he wanted to live, and never left; because he may have surrendered, but he was never defeated in battle; because, although he was killed, even the Army admitted he was never captured; because he was so free that he didn’t know what a jail looked like.” 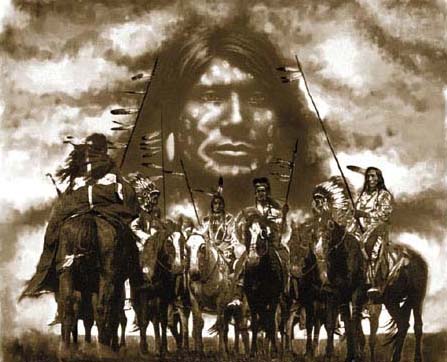 His “dislike of the oncoming civilization was prophetic,” Frazier writes. “He never met the President” and “never rode on a train, slept in a boarding house, ate at a table.” And “unlike many people all over the world, when he met white men he was not diminished by the encounter.”
Crazy Horse was bayoneted to death on Sept. 5, 1877, after being tricked into walking toward the jail at Fort Robinson in Nebraska. The moment he understood the trap he pulled out a knife and fought back.
Gen. Phil Sheridan had intended to ship Crazy Horse to the Dry Tortugas, a group of small islands in the Gulf of Mexico, where a U.S. Army garrison ran a prison with cells dug out of the coral.
Crazy Horse, even when dying, refused to lie on the white man’s cot. He insisted on being placed on the floor. Armed soldiers stood by until he died. And when he breathed his last, Touch the Clouds, Crazy Horse’s seven-foot-tall Miniconjou friend, pointed to the blanket that covered the chief’s body and said, “This is the lodge of Crazy Horse.”
His grieving parents buried Crazy Horse in an undisclosed location. Legend says that his bones turned to rocks and his joints to flint. His ferocity of spirit remains a guiding light for all who seek lives of defiance.
Robbie Robertson ~ Ghost Dance
[ Album: Music For The Native Americans ]