Thought of the Month : Mass Shootings and Mass Media 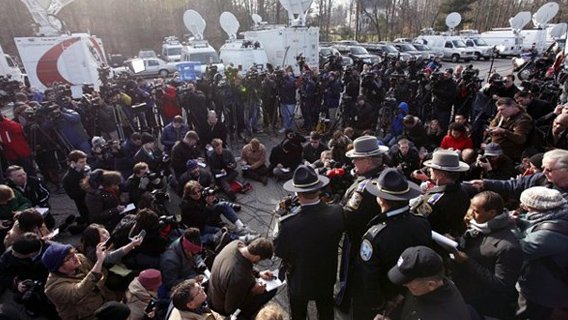 A press conference after the Sandy Hook shooting.

2012 was a year that was sadly defined by strange deaths and horrible mass shootings. The media attention garnered by these events surpassed any other type of news last year, maybe even the American elections. Even now, the trial of James Holmes and the aftermath of the Sandy Hook shooting are making headlines across the world. In both cases, the perpetrators of the murders were instantly elevated to the status of celebrity and, in each case, the number of deaths they caused is attached to them as if they were sport stats. During the coverage of Sandy Hook, news sources continually referred to the massacre as the “second deadliest shooting in History” as if it was all a competition and, even stranger, as if he somehow fell short of #1. As news stations fed on death and despair the same way hyenas feed on animal corpses, the audience, the TV viewer, was, once again, brought face to face with the culture of death that defines our era, where shock, trauma, horror and entertainment intersect in a twisted and perverted matter. As an entire Nation is in shock, millions of people with mournful hearts stare at the ever-looping footage broadcasted by news stations during their “live coverage”, hearing to the same “information” being said again and again by different newscasters. In the end, another traumatic event is embedded in the collective unconscious and another horrific story further defines our era.

These countless hours of live coverage do bear a single positive aspect: They sometimes allow unfiltered information to end up on the airwaves – which sometimes provide a different perspective on a story and what comes to be known as the “official” version of it. For example, in the first hours that followed the Sandy Hook shooting, several news sources mentioned the arrest of a possible second shooter. These sources confirmed the arrest of an adult male wearing camouflage pants who fled into the woods right after the shooting. However, after the first hour or so of coverage, no word about this man ever surfaced again. No information about this individual has ever been reported by mass media. Who was he? Was he another shooter? An assistant? If he had nothing to do with the shooting, why was he chased into the woods and why didn’t we hear from him again? How come no camera caught his face?

Who is Adam Lanza? 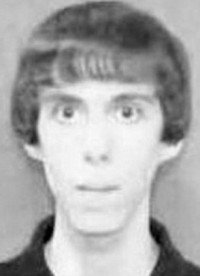 Let’s say that Adam Lanza was the only shooter in this tragedy. Who is he anyway? Why is there only one eerie black and white picture of his face available?  How come there is little to no information about him, about his story, about his last whereabouts and so forth? Was he truly autistic or mentally ill? Aren’t there medical records about this? How come he was so efficient during the shooting? Aren’t there surveillance tapes available?

In the weeks following the shooting, these questions were only partially answered and things will probably remain that way. The official story appears to be established, a face was attached to the event and that’s pretty much what mass media will divulge to the public. When many basic questions surrounding an event remain unanswered, chances are, something is being hidden. Or something was fabricated.

Could both the Sandy Hook shooting and the Aurora shooting have been carried out by mind controlled patsies in order to push a dark agenda? Given the lack of transparency in both of these events, it is honestly quite difficult to NOT consider this option. In this age of spy satellites, Internet access, wireless communication and so forth, it is nearly impossible for authorities to not have any relevant information about Adam Lanza. However, for now, all of this will remain Top Secret and in the meantime, public attention has been shifted to a new agenda.

I personally do not have any exclusive information about Adam Lanza, but there are many hints pointing towards him being a product of Delta Mind Control programming – aka “Killer Programming”. He was apparently “off the radar” for several years (was he being programmed?), he was skilled with guns and was very calm and efficient while carrying out the massacre.

Like all events that bear a somewhat ritualistic aspect, the Sandy Hook shooting is surrounded by strange synchronicities. For instance, several articles across the web mention that the words “Sandy Hook” are seen on a map during the movie The Dark Knight Rises. In the movie, the Sandy Hook island holds the Gotham stadium that super-villain Bane demolishes. 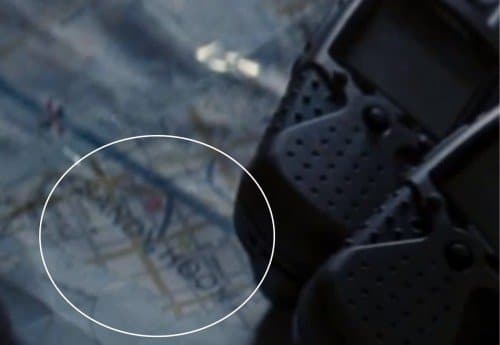 An area named “Sandy Hook” tagged as a “strike zone” during The Dark Knight Rises.

A strange fact is that a promo kit sent out to influential media industry individuals contained two items: A t-shirt and the map of Gotham City as seen in the movie. 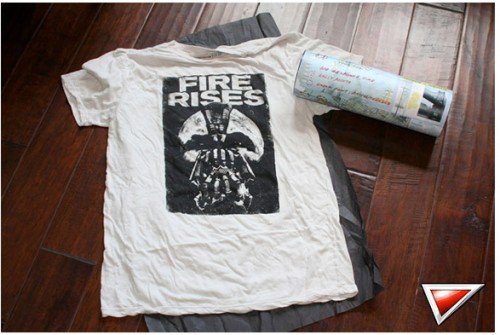 The promo kit contained a t-shirt featuring Bane and the words “Fire Rises” along with a map of Gotham City including an island named Sandy Hook. Screen capture taken from FirstShowing.net.

On the map, we can clearly read that “Sandy Hook” is a “strike zone”. 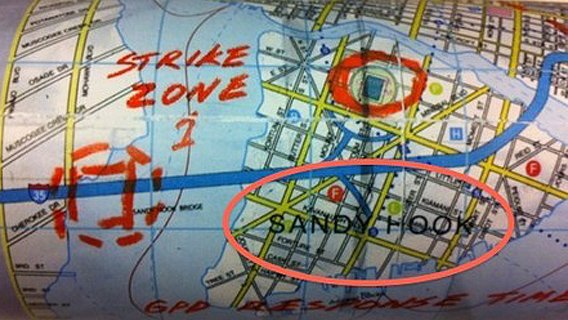 That is certainly a strange connection between the Aurora shootings (which occurred during the premier of The Dark Knight Rises) and the Sandy Hook shootings. Is this all coincidence? Are the same people behind both attacks? Was this all preplanned? Are these “coincidences” actually synchronicities as defined by Carl Jung, which appear to materialize in order to highlight a layer of truth?

The Sandy Hook shooting also has an odd relationship to the movie The Hunger Games. As stated in the article  “The Hunger Games”: A Glimpse at the Future?, the movie basically portrays the ritual killing of young people taken from the masses in order to amuse and to appease the elite. Strange fact: the author of the story, Suzanne Collins, resides in Newtown, Connecticut.

No matter what actually happened during these shootings, the aftermath will probably fit right into the elite’s plans. On a political level, wheels are already in motion to thoroughly modify the U.S Constitution’s Second Amendment, which protects Americans right to own and operate arms. While the U.S. Constitution used to be a sacred and untouchable document, it apparently now only takes one or two traumatic media events to allow severe violations of it. In the article about the  IRS Headquarters in Maryland, I noted that it is written right on the building “The Bill of Rights was not ordained by Nature or God. It’s very human, very fragile.”  That is what the powers that be believe. 9/11 lead to the Patriot Act and its violations of the 4th Amendment. Now we are seeing a great momentum against gun ownership rights. One of the elite’s major goals is to render the Bill of Rights obsolete … and it is currently happening.

On a deeper level, the mass shootings of 2012 forced our collective minds to further enter the elite’s “Videodrome“, where events taking place in set pieces tell the story of pure evil massacring innocence for no reason other than evil itself. Whether they realize it or not, the masses are participants in these rituals, as collective shock, sadness, anger and disbelief emanates out of every household in America, giving more power to these rituals and amplifying their impact on the world. In my article on the movie The Cabin in the Woods, I quoted the book Secret Societies and Psychological Warfare to describe the purpose of mass murders and their coverage by mass media. I believe the book is worth quoting again, as the Sandy Hook shooting appears to follow the same pattern.

“Of course, many serial murders are nothing more than the work of a single individual acting out a graphic horror movie he saw, or responding to powerful “psychotic” impulses for aggression and predation. But many other serial murders involve a cult protected by the U.S. government and the corporate media, with strong ties to the police. These murders are actually intricately choreographed rituals; performed first on a very intimate and secret scale, among the initiates themselves in order to program them, them on a grand scale, amplified incalculably by the electronic media. In the end what we have is a highly symbolic, ritual working broadcast to millions of people, a Satanic inversion; a Black mass, where the “pews” are filled by the entire nation and through which humanity is paganized, brutalized and debased in this, the “Nigredo” phase of the alchemical process.

The French adept Antonin Artaud, architect of the theory of the “Theater of Cruelty” with its transformative power, and the inspiration for the extreme sex-and-death media of our time, had this to say about the processing of the Group Mind: ‘Aside from trifling witchcraft of country sorcerers, there are tricks of global hoodoo in which all alerted consciousnesses participate periodically… That is how strange forces are aroused and transported to the astral vault, to that dark dome which is composed above all of… the poisonous aggressiveness of the evil minds of most people… the formidable tentacular oppression of a kind of civic magic which will soon appear undisguised.’

The issue of controlling humanity with esoteric words and symbols encoded within a play, a media spectacular or a ritual is one of the most difficult for people to comprehend. That is why most people are viewed with utter contempt as “cowans,” “the profane,” the “gentiles” and the “goyim” (cattle) by secret society initiates. “I think we are farmed,” Charles Fort said of humanity. It was Fort who also suggested that man deliberately invented the dogma of materialism in order to shield himself from the evidence of what was being done to him by means of psycho- spiritual warfare methods hyped by “coincidence,” symbolism and ritual.”
– Michael A. Hoffman, Secret Societies and Psychological Warfare

The post Thought of the Month (01/13): Mass Shootings and Mass Media appeared first on The Vigilant Citizen.