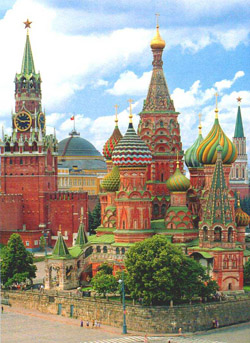 Known in certain new age circles as the focus of the Aquarian age, Russia is currently undergoing a massive ‘occult revival’. Interest in paranormal phenomena, occultism and parapsychology has never been more prevalent. With the end of the communist system, which brought with it the elimination of censorship, the Russian people were no longer forced to repress their interests in spiritual and religious matters. This led to a ‘spiritual renaissance’ of sorts – which is very much in full force today.

According to the British paranormal expert Colin Wilson, “occult powers seem to be a matter of temperament.” When it comes to second sight and telepathy, he says, the Irish are by far the most gifted. The Germans seem to produce the world’s best astrologers, while a significant number of talented clairvoyants are of Dutch origin – Croiset and Hurkos being two examples.

Russia, claims Wilson, “tends to produce mages – men or women who impress by their spiritual authority; no other nation has produced a spiritual equivalent of Tolstoy and Dostoyevsky, or even of Rozanov, Merezhkovsky, Soloviev, Fedorov, Berdaev, Shestov. Certainly no other nation has come near to producing anyone like Madame Blavatsky, Gregory Rasputin or George Gurdjieff. Each is completely unique.”

To find further evidence of Russia’s deep involvement in matters of a spiritual nature, one needn’t look very far. Simply by visiting bookshops and street vendors in Moscow, St. Petersburg, Kazan, Novosibirsk and other Russian cities, one will notice an abundance of titles on occult topics. Birgit Menzel, a professor of Russian Culture and Literature, says “it is almost impossible to understand contemporary Russian literature without being equipped with an encyclopaedia of the occult.” In the 1990s, around 39 percent of all non-fiction publications in the humanities dealt with topics of an occult-esoteric nature.

Not surprisingly, television programs on paranormal phenomena are also very popular in Russia. One such show is called ‘Inexplicable, But True’, which first aired on Russian television in early-2005. “The show’s creators are betting that the Russian audience’s readiness to believe in psychic powers and UFOs will guarantee good ratings,” says Brian Droitcour, a Moscow Times journalist. In the first episode of the program, its host, Sergei Druzhko, an actor and singer with a passionate interest in the paranormal, spoke about his near-death experience. While skiing near Mount Elbrus, Druzkho had a serious accident, and was buried in a snowy ravine for several hours, before being found by rescue workers. Were it not for the help of “supernatural forces,” believes Druzko, he would not have survived the incident.

In a nationwide survey conducted in 2005, involving 1500 respondents in 100 residencies in 44 regions, Russian interviewees were asked the following question: “Are you interested in publications and television programs dedicated to various paranormal phenomena (UFOs, telepathy, ESP, magic, astrology, etc.)?” An astonishing 48 percent of respondents answered yes. Forty-eight percent said no, and four percent were unsure.

One of the most popular television shows in Russia during the late-1980s and early-1990s was called ‘120 Minutes’, featuring the faith healer Allan Chumak. While working as a reporter and TV journalist, Chumak set out to expose faith healers, researching the subject extensively. He soon discovered, however, that he himself had healing powers and “an extremely strong aura” – or so he claimed. David Remnick, a Washington Post journalist, describes his own experience of watching the show: “Sitting behind a desk, the owlish middle-aged man with a mane of white hair stares at the camera and flings his hands about, as if he were petting an irritable cat. Five minutes of silent thrashing, and he is done.”

The thousands of fans who watched the show early each morning were firmly convinced that Chumak had genuine healing powers. People would place water and jars of cold cream in front of their television screens, waiting for them to be ‘charged’ with Chumak’s healing ‘energy’. Since Chumak made very little money from his ‘gift’, the possibility that he was a charlatan seems unlikely.

In a fascinating book called The Occult in Russian and Soviet Culture, one of the authors, Holly DiNio Stephens, provides great insight into the numerous occult beliefs and practices that form an intrinsic part of contemporary Russian culture. One of the most popular spiritual practices in Russian today is yoga, says Stephens, which is commonly regarded as a means of psychic development, and an effective way of enhancing one’s psychic energies. Iury M. Inanov, a prolific Russian author and ‘extrasensitive’ (psychic), believes the practice of yoga enables one to develop the psychic abilities that are needed to become a successful healer, such as the capacity to perceive and interpret ‘biofields’ (auras).

Another widespread occult belief is that of energy vampirism. “Discussion about energy vampirism,” explains Stephens, “may be heard in Russia on city streets, in cafes, in institutes and universities, and in private residences.” As the name suggests, an energy vampire is someone who steals the ‘life force’ (or prana) from the auras of others. These individuals are believed to be deeply egocentric, yet ostensibly altruistic and benevolent.

Because they have ‘locked energy fields’, energy vampires are unable to absorb ‘cosmic energy’ like most people, which is why they are driven to take energy from others.

In 1992, the St. Petersburg School of Spiritual Development of the Personality, published what is now an extremely popular pamphlet, entitled, ‘How to Avoid Energy Vampirism and How Not to Become a Vampire Yourself’. Says Stephens, “the average Russian does believe in the existence of auras and energy vampires, and in the havoc such people can wreak on a person’s biofield and health.”

As well as having an influence on popular culture and the humanities, the Russian occult revival has also left its mark on science and politics. In recent years, numerous cosmism-based organisations have sprung into existence, such as the Association for a Complex Survey of the Russian Nation, which collaborates closely with the Mir Station as well as the Slavic International Union of Aviation and Aeronautics. Based on the work of a number of great Russian thinkers, including the philosopher Nikolai Fyodorov, the geochemist Vladimir Vernadsky, the space scientist Konstantin Tsiolkovsky and the cosmobiologist Alexander Chizhevsky, cosmism was developed in the 1920s, and is now gaining wide popularity.

Defined as a broad theory of natural philosophy concerning the origin, evolution and future existence of the universe and humankind, cosmism is a combination of scientific, parapsychological and theosophical ideas. “The impact of cosmism on science in Russia today can be seen in the growing number of conferences, projects and college textbooks on topics ranging from bioenergy and the so-called ‘torsionic fields’ to UFOs and extrasensory psychic phenomena,” explains Menzel.

Also gaining popularity in Russia today are Transpersonal Psychology and shamanism, the latter of which is being practised as a form of alternative medicine, and has now entered the realm of scientific discourse, not just in Russia, but also in the West. In July 2005 the International Congress of Transpersonal Psychology was held for the first time in Moscow. The event attracted a large number of Russian psychologists and psychiatrists.

But not everyone in Russia has greeted the occult revival with open arms. In 1998, a commission within the Russian Academy of Sciences was established to combat the spread of what it called ‘pseudoscientific’ ideas within Russian society, the scientific community in particular. A report written by the commission begins as follows: “At the present time in our country parascience and paranormal beliefs are widely proliferated and propagandised: astrology, charlatanism, occultism, etc.

“Attempts to carry out various senseless projects at state expense, like the creation of torsion generators. The Russian population is being duped by TV and radio programs, articles and books with openly anti-scientific content.” The report continues: “These irrational and basically amoral trends doubtless present a serious threat to the normal intellectual development of the nation.”

Given the fact that spirituality and religion are an intrinsic part of the Russian soul and always have been, it’s fair to assume that these “irrational” trends won’t be going away any time soon.

An interview with Louis Proud about his new book The Secret Influence of the Moon appears in New Dawn 143 (March-April 2014).

Birgit Menzel, ‘The Occult Revival in Russia Today and Its Impact on Literature’ (The Harriman Review, vol. 17, no. 1, Trustees of Columbia University, 2007)

LOUIS PROUD Louis Proud, who lives in Darwin, Australia, is an avid writer and researcher specialising in paranormal and occult phenomena, conspiracism, and fringe science. Described by Colin Wilson as “one of the most acute commentators on the paranormal to appear in recent years,” his work has been published in Fate, Paranormal, Nexus and New Dawn magazines. He has written two books: Dark Intrusions: An Investigation into the Paranormal Nature of Sleep Paralysis Experiences (Anomalist Books, 2009), and The Secret Influence of the Moon. His blog is http://louisproud.net.

Read this article with its illustrations by downloading
your copy of New Dawn 104 (PDF version) for only US$2.95