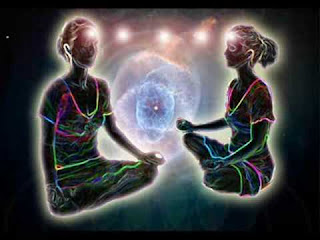 Return of Telepathic Civilization by José Argüelles and Stephanie South is an audio-video rendition of Channel 12 of the Cosmic History Chronicles Vol.5, Book of the Timespace !

Here’s an excerpt from the book …

“We are entering a new timespace. We will no longer be the same human. We are being changed into something new. A radical shift and evolution of the human species is about to occur. We shall become something we cannot imagine now.”

As a species we are now going very quickly from the psychically fractured timespace of the clock and its artificial reality to an integral timespace where our minds and bodies are synchronized once again with the cosmic cycles of the universe. This fifth volume of the projected seven-volume series explores the cosmic meaning of timespace as the medium of psychic and social organization focusing on the nature of society in relation to the Absolute. Visions of Tollan, Babylon and Utopia illumine the investigation of an enduring archetypal order and the effect of timing programs on the human psyche, especially as we move into an era of galactic synchronization and cosmic consciousness. Taking into account the role that historically transcendent archetypes have played in guiding human social evolution, a special feature of this text is the presentation of the 21 Archetypes of Hunab Ku – a new and psychically transfiguring means of exploring the post-2012 timespace that now awaits us.