The Living Tarot in Bangladesh

Recent parliamentary elections in Bangladesh have resulted in violence, as these things are wont to do, claiming at least 21 lives as of January 6th. (Bharat Press).  This photo was snapped on January 5th in Rajshahi by a Reuters photog: 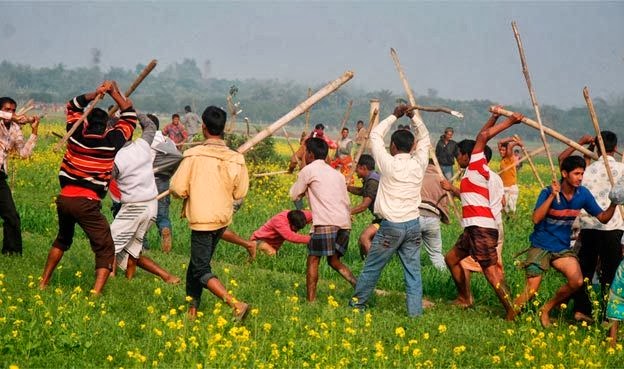 I know nothing about Bangladeshi politics and am not sure if that violence is being played out today.  No lack of respect intended but this shot seems so archetypal, kind of familiar.  To the point, it reminded me of the following Tarot card, the 5 of Wands from the Rider-Waite Tarot deck: 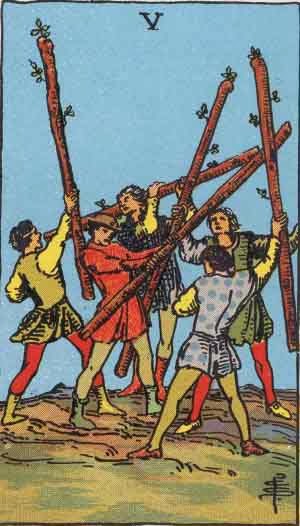 Colman had been initiated in the Golden Dawn in 1901, putting her into contact with Waite.  This commission is certainly her most widely known work; the deck itself is arguably the most widely-recognized.  I think they’re beautiful and after almost thirty years I’m still struck with a sense of wonder as I remove the cards from their hand-carved box with inlaid flower on the lid I bought for them. It’s Indian, I believe (wouldn’t it be more full-circlish if it had been made in Bangladesh).  This box is a perfect size, as if it had been made to the deck’s dimensions.  This was an inexpensive item from Pier 1 Imports.  My high school style relied upon Pier 1, my blue Mao cap (no red star) and Chinese slipper-type shoes were part of my daily attire.  New Waver, dude.  Strangely, these shoes were known among other people I knew as Jap Flats or even Pol Pots.  Something along the line of the “they all look the same” branch of genetic research.

Those shoes cost about three bucks and at the beginning had woven cloth soles.  Basically, they were a kind of espadrille; you could see them a lot in Kung Fu films, another 80’s staple hungover from the 70’s.  Those Mao caps were also de riguer for the budding young bohemian back in the day.

Back when I was a pup, this was the only deck easily found…I think I bought mine in a B. Dalton’s or Waldenbooks down the road from my parents’ place–for 8 dollars even–in a strip mall near the entrance to Northdale, one of the way-too-numerous unincorporated collections of subdivisions in North Tampa with the usual insipid names, evoking rural tranquility and the genteel life.  I often heard a snippet from Penelope Spheeris’s Suburbia in my minds, a “sample” from the film found on the soundtrack:  “Slums of the future….”  Mainstream bookstores were much more limited in those days but you could still pick out some spine-tingling titles.  How many times did I look at those glossy black paperbacks until my meagre allowance or hoarded lunch money accumulated into enough coin to acquire them?  The Necronomicon, The Satanic Bible, or The Magic Power of Witchcraft.  I not only had to collect my money, but gather up my courage.  I was a D&D kid and these books were powerful for me, exuding a kind of danger.  I kept them discretely placed on my bookshelf behind such innocuous tomes as Singing Wheels or Little House in the Big Woods.  Not because I’d get in parent trouble or have them confiscated, but I wanted to avoid a concerned talking to; plus, these were my private interests.  A book of shadows should stay in the shadows.

The bookstore where I bought the cards might have even been the same place I plunked down a few dollars for Eden Grey’s (Priscilla Pardridge, 1901-1999) influential A Complete Guide to the Tarot, published by Bantam in 1970.  I still refer to it from time to time on those rare occasions when I pull out the deck and have a go.  When I read, I don’t usually have the book meanings in my head, but I do like to sometimes take a peek in order to stimulate my thoughts.  It was written with the Waite-Rider in mind and these cards illustrate Grey’s text.

For a while in High School I ran with a group of self-styled Wiccans and that influenced my readings.  Why not, I suppose, but I would have been much-better served if I’d dug more into the Bible, the Kabbalah and the Golden Dawn, which spawned both Wicca and the O.T.O.  Wicca founder Gerald Gardner (1884-1964) and O.T.O. founder Aleister Crowley (1875-1947) had cut their teeth on its teachings and rituals.  Crowley even designed his own Thoth Tarot deck, but in my opinion they compare poorly to Colman’s graceful lines and the deceptive simplicity of their composition and symbolic content.  Waite and Colman do less with more and her work has aged more gracefully; Crowley’s additions just seem kitschy, crowded and contrived to be menacing.

Tarot for me is not about fortune telling, but it is a useful way to place some random data into a structure and contemplate the correlations:  numbers, suits, reoccurring images, Major vs. Minor arcana.  Hell, if we can use Rorschach inkblots to measure the psyche, why not Tarot cards?  I run loose with the cards and stick to the so-called “Keltic” cross layout or sometimes (rarely) a simpler three card technique for a quicker way to inquire about relatively simple concerns; I think less about traditional meanings than I do at developing my own series of impressions based upon the internal correspondences and little details that might catch my eye.  The meaning of a card, none of it inherent, changes anyway in terms of where it appears and in the relationship each card has with those around it.

I rarely look at the cards unless my wife mentions it and someone presses for a reading.  Sometimes I’m half-lit by this point, which is not the best state to be in when working with systems more complex than a bottle opener.  But some of these readings have turned out really well.  I elicit commentary from the querent:  “What do you see?  What does this bring to mind?”  I’m still excited when I begin to formulate a narrative while the querent is still throwing darts blindfolded (not literally!)  The querent’s wide-eyed recognition can be delightful.  Not so much if the brow over the wide eyes is darkened.

Anyway, apart from the fact that I have a strange tendency to sleep in a position like the Hanged Man (XII in the Major Arcana), I have nothing here to add. 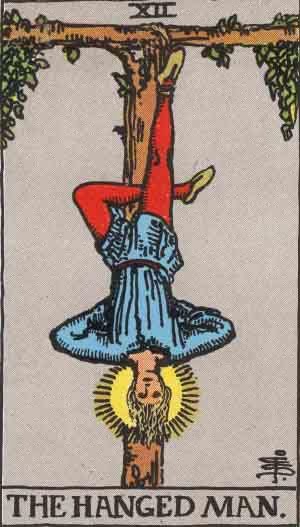 This was not intended to be a reminiscence or a “Tarot” post, merely a juxtaposition of two images.  In the first we see men fighting in a field using staves over the results of a disputed election.  In the second, we don’t know the cause, but the strife and weaponry are the same.  The sky is blue and the day seems lovely.

The Waite-Rider deck is simple, yet not devoid of complex symbolism derived from Waite’s extensive mystical knowledge; in addition to the Golden Dawn he was a Freemason and Rosicrucian who’d later write extensively on ceremonial magick, the Kabbalah, alchemy and other Western esoteric traditions.  I still refer to his New Encyclopedia of Freemasonry (1921) whenever I write about Freemasonry or related topics.

All that knowledge is distilled into a series of 78 clean-lined and finely composed images of a Goldilocks just-rightness.

I love coming back to an old flame from something so (superficially) unrelated.  Time folds and the threads that keep the past and future bound together become visible.  Tie up the fraying ends or tear through them, let it all drift apart.  Apparently the ghost of someone, I can feel it overlooking my shoulder, is urging me on.  But that could be something else entirely.