The Damn Fool in the White House 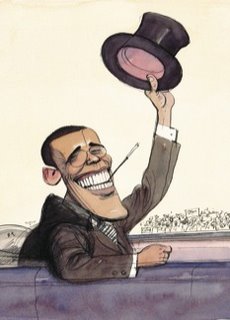 In late February, Israel bombed Hezbollah targets. It did so along Lebanon’s border with Syria.

Washington and Israel partner in regional adventurism. Do Obama and Netanyahu want war on Lebanon? Are they planning regional conflict?

Will Iran be targeted? Will US-orchestrated Venezuelan violence continue? Will other nations be targeted for regime change?

The damn fool in the White House risks global war. Ukraine is a major flashpoint. Conditions today are the most dangerous since the 1962 missiles of October crisis.

Jack Kennedy was president. Early in his administration he changed from cold warrior to peacemaker.

He wanted all nuclear weapons abolished. He favored “general and complete disarmament.” He wanted all US forces out of Vietnam by December 1965.

He wanted to “splinter the CIA in a thousand pieces and scatter it to the winds.”

After resolving the 1962 crisis, he said he “never had the slightest intention” of confronting Cuba or Soviet Russia aggressively.

The damn fool in the White House is no Jack Kennedy. Neocons infest his administration. Rogue elements make policy.

Obama partnered with neo-Nazis extremists. He’s got a tiger by the tail. Millions of Ukrainians reject them. Expect millions more to join them once their agenda becomes apparent.

The damn fool in the White House risks war. He outrageously warned Putin against intervening.

“Invasion,” they screamed. They outrageously accused Putin of “provoking a separatist rebellion…”

Obama and EU partners “must act quickly to prevent Ukraine’s dismemberment,” they said.

They demand Obama order a “heavy price” otherwise. They want Western monied interests given a free hand to rape and pillage Ukraine. They barely stopped short of urging war.

On Saturday, Obama and Putin spoke for 90 minutes. The damn fool in the White House wrongfully accused him of breaching international law.

Ukrainians have the right to determine their own future, he claimed. His orchestrated coup denies them entirely.

He’ll do so, he told Obama. He’ll protect the safety and security of Crimean Russian nationals, he said. He’ll do so in other eastern areas if needed.

He’ll do so “within the framework of international law.” He stressed the need to prevent crisis conditions from escalating. He expressed concern about Kiev ultranationalist putschists usurping power.

Churkin called on Security Council members to act responsibly. He wants them to tell Kiev elements to refrain from violence.

Gunmen attempts to seize control of Crimean government buildings were foiled, he explained.

Putin hasn’t yet ordered it, he said. Claims otherwise are false. Or that Russia intends using military force against Ukraine.

Churkin urged all sides act “with cool heads.” He wants Security Council members to order reinstitution of the February 21 agreement.

Deployed units are joining local self-defense forces. Soldiers doing so reject Kiev putschists. They resigned from Ukraine’s military. Key is what its commanders do ahead.

At the same time, thousands of pro-Moscow supporters rallied in eastern Ukrainian cities. They back Russia’s anti-Kiev position.

He defected straightaway. “I, Berezovksy Denis, swear allegiance to the Crimean people and pledge to protect them, as required by (military) regulations.,” he said.

The Hetman Sahaidachny headed home to Sevastopol after taking part in a Yanukovych authorized counter-piracy operation with NATO and the EU.

He said Russia reserves the right to protect “the lawful interests of citizens and servicemen deployed in the territory of the Autonomous Republic of Crimea.”

If needed, Russian forces “have the right to act in the framework of the mandate issued by the Federation Council to the president,” he added.

Ukrainian officials act irresponsibly “if they make unlawful decisions on the use of force against Russian citizens,” he stressed.

It remains to be seen how western Ukrainians react. Expect eastern ones to ignore Kiev diktats. What happens then is up for grabs.

“You in Kiev sort it out between yourselves, and we will deal with the republic’s problems,” he said.

They want protection from anti-Russian elements. Konstantinov warned Kiev against forcefully trying to usurp control in Crimea as well as other areas resisting its authority.

Thousands from southern, eastern and central Ukraine came to Belgorod. They reject Kiev authority. They’re concerned for their safety.

Expect many thousands more to join them. Chaotic conditions drive them to seek safety.

On Saturday, Russian immigration authorities reported 143,000 asylum requests in a two week period. They promised expedited processing of their requests.

“The tragic events in Ukraine have sharply increased the number of applications to regional migration authorities.”

“People are bewildered, frightened and despondent, she added.

Increasing numbers of Ukrainians living in Russia are applying for citizenship.

Its directors and staff include a rogue’s gallery of hard-right extremists. They deplore peace. They crave war. On March 1, they issued a statement on Russia’s so-called “intervention in Ukraine.”

They lied claiming “Putin has violated Ukrainian sovereignty…” Obama ‘warned’ him, they said. ‘(T)here will be costs for any military intervention in Ukraine,’ he said.

FPI rogues want Obama to “lead the world (in) impos(ing) (them) and to ensure his bullying fails.”

They demand Putin renege on his promise to protect Crimean Russian nationals.

They want John Kerry and Chuck Hagel to visit Kiev. They want them to “show solidarity” with its neo-Nazi coup d’etat government.

They want NATO member states having the option of abandoning NATO-Russia Founding Act of 1997 provisions.

“It is critical that the United States and the international community make clear to President Putin that his military intervention in Ukraine is unacceptable, and will isolate the Russian government diplomatically, politically and economically,” said FPI.

“Failure to do so will only reward President Putin’s indefensible and dangerous actions, and could embolden him to take further actions towards Ukraine and its neighbors.”

Obama’s administration is infested with FPI type extremists. How he’ll respond to events remains to be determined.

At stake is world peace. Will the damn fool in the White House undermine it further? His track record isn’t encouraging.