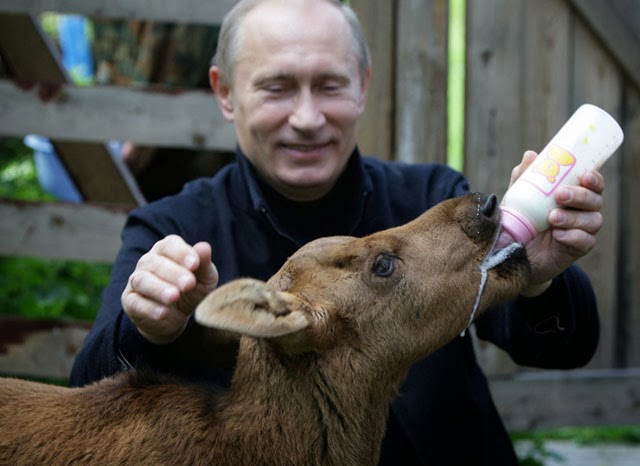 Uncle Volodya says, “A great deal of intelligence can be invested in ignorance when the need for illusion is deep. “

It’s up to you how you wanna live: go out and have your fun
You don’t wanna be a fugitive from the things you never done;
Ain’t nobody gonna throw you a bone, to keep your hopes alive:
You got to walk like a big dog, baby, ’cause only the strong survive
Roll of the dice, put ‘em in motion
Where they stop, nobody knows
Just a roll of the dice ~ ain’t nothin’ for certain
But if you feel lucky….go ahead and roll them bones
~ From “Roll of the Dice”, by The Fabulous Thunderbirds

The west plainly does not like its chances in the event that it confronts Russia militarily in the Crimea. So it is going to settle, for the moment, for making the presence of Russian troops look like a massive invasion that has left poor, decent Ukraine violated and sobbing with its skirts shredded around its thighs, just as democracy was about to flower.
.
Don’t you believe it.
.
As a classic of disinformation, it’s hard to beat the work of professional obfuscators, and the BBC does not disappoint. Its maundering “Moscow’s Ukraine Gamble“ is a best-of-British effort to wrench things back on track to where the west dictates to Russia rather than the other way round.

Before we dig into it, let’s start from an anchor point few are exploring
~ The present government in Ukraine is illegal and illegitimate.

Thanks to Natalie at Fluent Historian and a handful of other sites like Moon of Alabama, it is clear that the Patronage-Seats-to-the-Revolutionary-Soldiers “transitional Government” in Kiev did not come anywhere near following the rules to impeach Yanukovych, and he is consequently still the legal and elected President of Ukraine.

Therefore any moves by the current McGovernment in Kiev to make bold decisions like signing the EU Association Agreement before the Presidential elections take place are null and void and no international body should be so foolish as to accept them as legally binding.

Well, let’s take a look at it. This, we learned, is in many ways like the last time Russia launched a brutal invasion ~ against peaceful Georgia, in 2008. They don’t come straight out and say it exactly like that; instead drawing the comparison and leaving you to conclude both actions were unprovoked invasions. The west, they say, was left largely on the sidelines in both instances.
.
Is that so? Ha, ha; no.
.
In both cases the west was fully involved beforehand, stroking and cuddling with the leaders and urging them on, which in Georgia’s case was sufficient to convince the sociopath Saakashvili that the west would ride to support him if he only got the ball rolling. In this case, too, the glorious revolutionaries who have awarded themselves plum postings in Kiev also appealed to NATO right away, perhaps believing the rush of billing and cooing from Foreign Ministers, diplomats, U.S. State Department officials and EU bigwigs to coax the revolution in to being and support its objectives so vociferously in the press constituted a promise to send in the tanks should their shooting their mouths off result in Russia throwing a beer in their face.

There can be little doubt that western and EU elites encouraged this from a long time back.

When they were still sure that Yanukovych was caught between a rock and a hard place and would sign the association agreement even though it meant freeing and pardoning Tymoshenko, the west growled at Russia like a dog with a bone between its paws, and made a lot of high-minded freedom-to-decide statements to the effect that sovereign nations must be left free from interference to make their own decisions, and that anything, anything Russia did that might affect that, even to musing that it might have to impose tariffs on some Ukrainian products in order to discourage dumping of products the EU would not buy would constitute bullying, and that if Russia knew what was good for it, it would just be supportive or else the EU and USA would find ways of punishing it for its reluctance to accept the new world order.
.
Well. Then Yanukovych executed a complete reversal, squibbed the agreement and threw it in the trash, and went to Moscow to strike a better deal, which he did in very short order.

This was nothing more than a sovereign nation making its own decision,but right away the western elites swung into action to undermine, sabotage and ultimately re-reverse it.

Which brings us to the deployment of an augmentation of Russian troops to the Crimea, and widespread pro-Russia revolt throughout the East and South of Ukraine proper, while the Transition Circus Troupe in Kiev squeals belatedly for unity.
.
The whole thing, according to the Beeb, is a battle of wills between Moscow and Kiev (in which the USA and EU are apparently uninvolved and blameless) which could turn into a civil war in Ukraine.
.
Why, yes; it might. Whose fault is that?
.
Russia’s?
.
Are you kidding me?
.
But the west so saw it coming, because Russia’s moves were all right out of the “post-Soviet play-book”.
.
Just as if the west has not engineered a series of regime changes in quick succession, using the “Regime-Change Play-Book”.

Seize on an incident,
blow it out of proportion and
cast it as a rebel group struggling for freedom against an apocalyptic dictator,
promise the support of all those who love freedom
while reminding all those people that freedom isn’t free
and it is their duty to help their brothers achieve it,
demonize the government beyond all recognition and
blithely make up incidents of it firing into crowds of peaceful protesters,
announce the invocation of the Right to Protect Civilians and
the imposition of humanitarian corridors
~ which coincide with all the government’s possible defensive moves ~
for the purpose of evacuating fleeing civilians and
then let mission creep do the rest.
Badda-bing, badda-boom, new leader, new government, move on.

And now, although he has stuck to the letter of the law thus far and even gone along with all the ridiculous artificial anchors the west has attempted to tie to his legs, Putin “risks losing all that goodwill” if he will not withdraw his forces and leave the Crimea to the tender mercies of the phony government in Kiev, so that they can deliver a complete trussed package to the EU. Because if he doesn’t, the EU might, you know, find its oil and gas supplies somewhere else. Just sayin’.
.
Tell you what; you do that, Sunshine.
.
Anybody believe Russia has brought in additional forces until the total in the region surpasses 25,000 troops (remember, we’re just talking Russian forces; the some 50,000 troops loyal to the Crimean Autonomous Region do not count), 161 aircraft and 388 warships? Oh, wait; do Ukrainian navy ships which have deserted and gone over to Russia count against their total?
.
I was being sarcastic ~ the total strength of the Russian navy including auxiliaries and submarines is less than 388 warships.
.
But wait; here comes my favourite part.

“Any economic solution must draw in international financial institutions and Western governments too. That is going to involve some kind of partnership with Moscow and there is not currently going to be much good will towards the Kremlin.”

Got that? If Moscow does not immediately stop this fannying about, which is impeding the global recognition of an illegal and illegitimate government imposed by a violent coup, Moscow might not be invited to contribute financially to the goal of a united and Russia-intolerant Ukraine as an EU and NATO member!!
.
I have to stop here, because I can’t go on. I’m speechless.
Bookmark the permalink.