SHE WAS A CHRISTIAN: WARNING: GRAPHIC 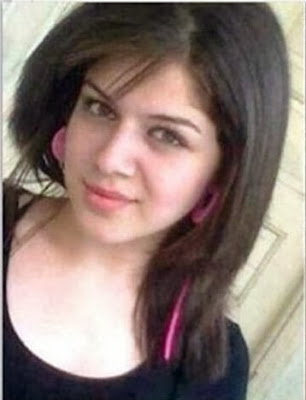 ED Noor: Someone was very upset about the original opening shot when I first posted this piece. (This is my seventh edit in an hour). I have moved the second part of the photo to the bottom of the page so you can choose to scroll or not scroll down to view it.

This beautiful woman was attacked ~ raped by about 20 “Syrian rebels” and afterwards murdered in Syria. What was her crime? She was a Christian. Now ask why Putin is becoming the international hero of the age! He is standing up for OUR Christian world!

Are the perpetrators of this crime the ones you really want to back in Syria? Because that is what OUR Western leaders are in favour of ~ those under the thumb of Israel.

By Noor Al Haqiqa
Snippits and Snappits
September 25 2013 I was sent this appalling image by someone who used the opportunity to bash the Muslim world completely over these horrid crimes against Christians. He linked the whole thing to the dangers of Shariah Law; him a highly influential and respected Canadian, one of the top voices in our freedom of speech movement. However in this instance he seems to have lost sight of who is behind the whole mess to begin with; which surprised me because he is quite Zionist aware.

At the end of the email were the words:

“This is the real face of:
“SHARIA LAW”.
Wake up World.
No Christmas,
but
Happy Ramadan.

THEY DON’T WANT ANY RELIGION EXCEPT THEIR RELIGION “ISLAM” IN THE WORLD. ALL MUSLIMS ARE NOT THE TERRORISTS BUT THE TERRORISTS ARE ALL MUSLIMS. OUR COUNTRY SHOULD NOT ALLOW MUSLIMS ANY MORE. THEY WILL NEVER CHANGE THEIR BEHAVIOURS IN OUR SOCIETY. THEY WILL TAKE MORE ADVANTAGES AND MAKE MORE BELIEVERS FOR THEIR ISLAMIC SOCIETY.PLEASE.. NO MORE OF THEIR MOSQUES AND THEIR SCHOOLS IN OUR BEAUTIFUL COUNTRY AND NO MORE BOATS FROM MUSLIM COUNTRIES !!!”

I don’t know why the caps but the writer seemed to think them necessary. Anyhow, I responded:

“These boat people are not fleeing Syria, for example, because they WANT to leave their ancient homes! Remove the wars and they will gladly return, provided the place is not devastated to smithereens and unliveable like so many parts of Iraq, among other places. There would be no refugee problem if there were no wars. Basic common sense.  These fleeing non-Wahabbist Muslims are as much potential victims as that lovely Christian girl was, make no mistake about that. And who is keeping those thugs in position? Who is paying the bill? America and  her allies including, especially, the KSA.
“Just a thought. This sort of thing really does push the Jewish agenda of the “Clash of the Civilizations” forward a notch or two. The thinking behind most of this email plays right into that very hateful mindset necessary to bring that Zionist event about.”.

Sadly I forgot to remind him of the Noahide Laws so smoothly codified in the legal system of our own country, Canada. Forget Shariah! Noahide is already here!

Over the past I have made my position clear on the horrors being perpetrated in Syria. And by whom. Who backs them. The world knows the truths of this by now thanks to this truly being an age of information that tends to break away and be seen by all who have eyes to see.

God bless all whistleblowers and also the sickos who take such pride in their despicable actions that they memorialize them in the digital world.
.
Both the late Saddam Hussein and Bashar al Assad in Syria protected the large Christian minorities in their countries. Enabling jihadist victory in Syria seriously imperils Christians there.
.
I can guarantee you that not a single synagogue in Syria has been desecrated. If you find such information ~ or, even better, photos ~ I would be more than thrilled to know about it. Wherever these takeovers happen, such as the Bolshevik Revolution in Russia, the synagogues are left standing unscathed all else desecrated, destroyed, the believers persecuted in ways that defy belief.
.
After the coalition of the brainless overthrew Saddam Hussein, caused 600,000 Iraqi deaths and a trillion dollars cost to the empty U.S. treasury, the result has been vicious persecution of Iraqi Christians and tens of thousands of refugees.
.
Is attempting to replace the present Syrian Government really such a good idea?
.
It may be in Israel’s interests; it is NOT in the interests of Christians. As if Israel gives a darn about these people who follow the Jesus so abhorred by all Jews. We know of their ancient hatred of all things gentile.
.
We know that this mad version of Islam, Wahabbism and its violent offshoots; Wahabbism, the Islam espoused by the Muslim Brotherhood, is the driving force behind this war. And again we know these rebels are comprised of the scum of Middle Eastern prisons and an international force of disenfranchised and radicalized Muslim men. These men are driven by a vile hatred of all things not so radical as they ~ thugs on a murderous rampage funded by America, Israel, Turkey and various other allies.
.
(I find it interesting to consider that the Muslim radicals participate in beheading as a form of execution whilst the preferred method by the Talmudics is beheading as well although they seem to prefer the guillotine.)
.
But remember, dear Reader, the evil and hatred of these thugs is being channelled by the elite; these jihadists are tools being used to bring about the destruction of a peaceful, independent, diverse Muslim nation. A nation that has until now resisted successfully to their meddling.
.
The films of beheadings and atrocities are everywhere on the net. Warm ups to the real thing. We can almost become hardened to the sights we see if we are to survive yet know. I have posted photos of hung babies, tortured children, all horrors to never be forgotten once seen.
.
This photograph, this beautiful girl, is one of those images. Once seen, you will never forget her face. She was such a beautiful girl.
.
Remember, too, that this sort of thing is the fate of all Christians under the JWO/NWO. Such atrocities against Christian women during the Bolshevik “revolution”, the ensuing war in Spain were all in a day’s work. The atrocities committed against women, particularly those of the cloth, were beyond heinous. What you see in this photograph is the work of the same mindset to eradicate Christianity.
.
Remember. Synagogues never get desecrated.
.Now you have the choice to scroll down or change the page. As I have said many times before, the seen can never be unseen. However, this woman’s death should not be in vain. She is a martyr,  make no mistake about it.
.
SCROLL at your own discretion. 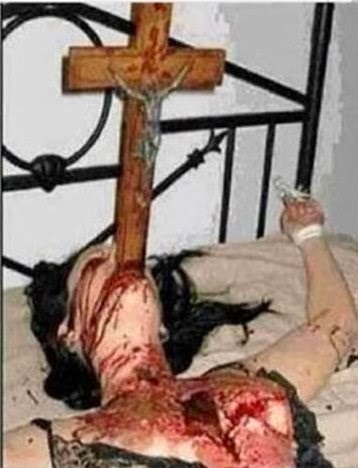 LOOK AT HER!
LOOK AT HER AGAIN!
AND AGAIN!
STUDY IT!
.
Then think again about Syria.
THIS IS WHAT OUR LEADERS PUSH FOR.
THIS IS WHAT WE MUST END!
Bookmark the permalink.