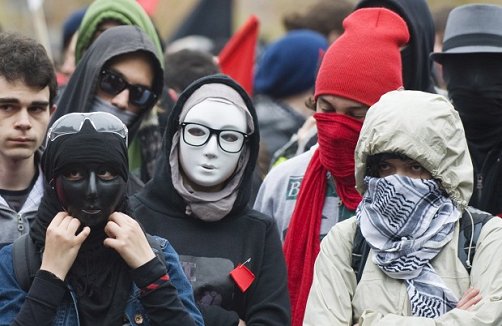 THANKS to Penny of Penny for Your Thoughts for the video

If they did not know it after the last set of riots a few years ago in Toronto at the G-8 Summit, when are Canadians going to realize the Harper government (once known as THE CANADIAN GOVERNMENT) is getting ready for a One World Government?  The United Nations, World Trade Organization and all the big businesses controlling what laws a country passes are just the beginning.
The internet spy bill and now the budget omnibus bill are just 2 examples of how Harper is taking this country down.  Where is the accountability of criminal cops who broke so many Charter Rights during the G 20 summit?
Harper and his deluded GANG of ignorant, mercenary, raptureista thugs have lost whatever connection they once may have had with reality. They seem to be flailing away in any direction in an attempt to maintain their control over how the public voices its opinion on how its government is being run. What makes me want to cry is the attitude of so many of the commentators to the article below on the new law to make wearing masks illegal… they support it!
OTTAWA’S ANTI-RIOT LAW NEEDS A MASK
TO HIDE ITS FLAWS
The federal Conservatives have developed a disturbingly reflexive tic. They awake in the morning, read something in news that annoys them, and race off to pass a quick law banning or punishing it.
They discover Clifford Olson is receivingpension plan payments, so they ban it. They’re upset that a Chinese grocer is arrested after chasing off a persistent thief, so they change the law. Intent on helping police track down crooks, they introduce a law empowering police to spy on almost anyone for anything.
As previous experience has illustrated, this sometimes blows up on them and they have to backtrack. Just this week Immigration Minister Jason Kenney amended a bill that would have allowed some refugees to be detained for a year without a review by the Immigration and Refugee Board. Not everyone is as quick as Mr. Kenney to learn from mistakes, however, as is evidenced by a proposal to adopt a ten-year sentence as part of a new law against rioters who wear masks.
The plan is contained in a private members bill to which the government has given its support. The holes in it are easily spotted. It is already against the law to wear a mask while committing a crime, so the Tory plan effectively doubles up on a law that already exists. By tacking on a draconian penalty, the law risks imposing a harsher penance than applies to more serious criminal offences, meaning someone could potentially spend more time in jail for wearing a mask than for carrying an illegal weapon.
Disparities of that sort often lead to hesitation on the part of police to use the law, or for judges to impose the penalties available, nullifying the very point of the legislation. That has been demonstrated in “three strikes and you’re out” laws, which call for the automatic imposition of harsh penalties for a third offence, even in the case of relatively minor transgressions. Recognizing the obvious injustice of such situations, police simply don’t lay the charge if they expect it will produce an absurdly disproportionate sentence.
Blake Richards, the Conservative MP who proposed the new bill, says he views the law as preventative, enabling police to arrest masked protesters before a demonstration gets out of hand. What, then, is the crime? It is not against the law to wear a mask before a crime, nor should it be. And how are police to judge, or prove, that an accused would have taken part in a riot, if the riot had broken out?
On top of all that is the crime itself: how do you define a mask? Is someone masked if they turn up at a protest in a toque, sunglasses and a scarf? Would demonstrators be required by law to arrive bare-faced and bare-headed at a demonstration in Ottawa in January ~ where it can get a bit cold in the winter ~ for fear of being tossed in jail for a decade if the protest gets out of hand? Does a mask that covers only the eyes qualify under the law, and, if so, how does that differ from sunglasses and a hoodie?

Much as they embrace the “tough on crime” imagery, the government weakens its own argument for such measures when it’s seen to be acting impulsively and without adequate time, preparation or thought about the details of its legislation or its potential impact. It also makes itself look downright silly.