Seymour Hersh on Obama, NSA and the ‘pathetic’ American media

Pulitzer Prize winner explains how to fix journalism, saying press should ‘fire 90% of editors and promote ones you can’t control’ 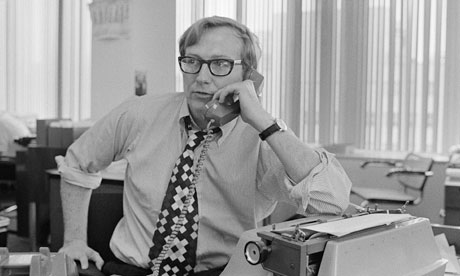 Seymour Hersh exposed the My Lai massacre during the Vietnam war, for which he won the Pulitzer Prize. Photograph: Wally McNamee/Corbis

Seymour Hersh has got some extreme ideas on how to fix journalism – close down the news bureaus of NBC and ABC, sack 90% of editors in publishing and get back to the fundamental job of journalists which, he says, is to be an outsider.

It doesn’t take much to fire up Hersh, the investigative journalist who has been the nemesis of US presidents since the 1960s and who was once described by the Republican party as “the closest thing American journalism has to a terrorist”.

He is angry about the timidity of journalists in America, their failure to challenge the White House and be an unpopular messenger of truth.

Don’t even get him started on the New York Times which, he says, spends “so much more time carrying water for Obama than I ever thought they would” – or the death of Osama bin Laden. “Nothing’s been done about that story, it’s one big lie, not one word of it is true,” he says of the dramatic US Navy Seals raid in 2011.

Hersh is writing a book about national security and has devoted a chapter to the bin Laden killing. He says a recent report put out by an “independent” Pakistani commission about life in the Abottabad compound in which Bin Laden was holed up would not stand up to scrutiny. “The Pakistanis put out a report, don’t get me going on it. Let’s put it this way, it was done with considerable American input. It’s a bullshit report,” he says hinting of revelations to come in his book.

The Obama administration lies systematically, he claims, yet none of the leviathans of American media, the TV networks or big print titles, challenge him.

“It’s pathetic, they are more than obsequious, they are afraid to pick on this guy [Obama],” he declares in an interview with the Guardian.

“It used to be when you were in a situation when something very dramatic happened, the president and the minions around the president had control of the narrative, you would pretty much know they would do the best they could to tell the story straight. Now that doesn’t happen any more. Now they take advantage of something like that and they work out how to re-elect the president.

He isn’t even sure if the recent revelations about the depth and breadth of surveillance by the National Security Agency will have a lasting effect.

READ MORE>>> from theguardian.com where this first appeared.