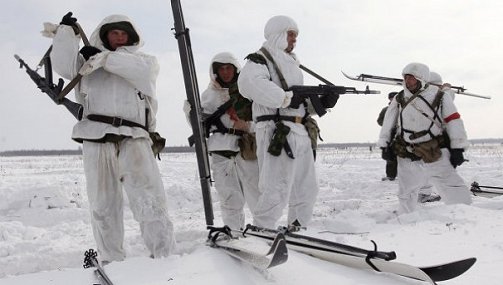 By Maria Snytkova
Pravda
April 23, 2012
The Russian authorities have announced the formation of two dozen special border guard units in the Arctic. The strengthening of the Arctic borders will be implemented in the next eight years. The Defense Ministry promised to patch all the holes in the Arctic border formed in the post-Soviet years. The military presence will be strengthened by the ground troops.
Meanwhile, as noted by the Ministry of Defense, the unprotected border areas in the Arctic are frequented by foreign submarines belonging to the U.S. and the UK not particularly friendly towards Russia. Now these foreign visitors will be required to meet the eight new nuclear attack submarines of class “Severodvinsk”. These submarines are the first to join the Northern Fleet.
By 2015, the first units with multi-purpose armored vehicles MT-TWT will be sent to service the Arctic border. This powerful equipment can cover the distance in deep snow and extremely low temperatures ~ MT-TWT can operate at 50 degrees below zero Celsius.
Border troops with 15 to 20 people each in the next three years will be created on each of the twenty-arctic outposts under the federal target program “State Border of the Russian Federation” (2012-2020).
The main objective of the strengthening of the Russian border in the Arctic is the increasing interest of various countries in the polar resources. Obviously, every year the oil and gas reserves on land are depleted, which led to the fact that the northern regions that provoked little interest from the civilized world before, have now become a tasty morsel.
In this regard, the countries that own polar areas ~ the U.S., Canada, Denmark and Norway ~ have begun to actively strengthen their borders. Russia has joined their ranks and announced a prohibitively high sum that will be invested in the development of the Arctic region ~ 1.3 trillion rubles.
A good portion of this amount, 503 billion rubles, will be allocated from the federal budget, 724 billion rubles ~ from regional, 80 billion is expected from Russian businessmen, indicated the Ministry of Regional Development.
The development of oil and gas fields is not the only area in need of financial support. The Northern Sea Route that under global warming promises to be one of the busiest sea routes between Northern Europe and Asia, needs funding as well. And yet, there is now a desperate need for infrastructure to strengthen navigation systems, ice-breaking fleet, etc.
All this was in place in the Arctic territories owned by the USSR. There were polar airfields for the strategic aviation of the superpower and the system of navigation and control system over the course of vessels. However, after the collapse of the Soviet Union, the country was swept with amnesia that for years has erased from the memory the importance of the polar lands. To date approximately 2500 kilometers in the middle of the area is not controlled by radar systems.
.

Please enlarge thumb.
Some sagacious neighbors of Russia, like China, were quick to take advantage of the situation. As reported by the Defense Ministry, the Chinese military icebreakers began to appear with expeditions to the Arctic, which indicates their genuine interest in the polar areas.
Having noticed that flocks of vultures began circling over the Arctic, the Arctic states decided to strengthen their positions. Canadian Ministry of Defense published a report “The Arctic Council: its place in the future management of the Arctic,” talking about the upcoming construction of the regional military air base, designed for the landing of military aircraft and intended to become a Canadian outpost in the Arctic.
The country also increased the Canada Arctic marine group that will have eight patrol ships. In addition, the number of rangers will be increased in the Canadian polar areas.
In March, a statement on the strengthening of the Arctic presence was made by the United States that stressed that the states have a great interest in the resources of the region. Meanwhile, the proportion of Arctic oil reserves that belong to the United States is only 19.8 percent, which seems very small compared to 71 percent of the Arctic reserves of “black gold” in the Russian Arctic territories.
But the U.S. is extremely fearful of the rapid melting of ice in the Arctic, and is in a hurry to improve the experience of navigation in polar conditions, first of all the icebreaker fleet.
There is movement in the Arctic lands of Denmark that announced the intention to build up its military presence in northern Greenland. Danish authorities are seriously considering placement of the Arctic military response and command post.
In this regard, Denmark has planned a program of military appropriations for 2010-2014, which includes consideration of the need to use military aircraft for surveillance and sovereignty in Greenland and in its neighboring areas. The country is so worked up in the desire to preserve the Arctic territory, rich in large reserves of minerals, that it even created a new public position ~ “the ambassador for the Arctic.”
This position was occupied by the former Head of Public Diplomacy Ministry of Foreign Affairs of Denmark Kvals Holm, whose main task now is to promote national interests of Denmark in the region.
However, Denmark has prepared a “red carpet” for the representatives of the PRC on the way to the Arctic, and is actively advocating for the provision of a place in “the Arctic Council” to Beijing.  In return, Danish authorities were promised Chinese investment.
Norway has also strengthened its position in the Arctic, but focused on the use of the so-called “soft power”, which is to study the Arctic. The territorial division is rather blurry, so to obtain the polar lands it is sufficient to provide a constructive proof that a particular site is owned by a particular country.
Against the background of the enhanced Arctic states the rumor about the “Arctic Cold War” has emerged.
They say the war is to break out due to a conflict of interests in terms of the resources hidden under a thick layer of ice.
Experts estimate that the Arctic ice shelf hides five million tons of oil, seven and a half billion tons of gas and gas condensate, as well as large stocks of diamonds and other minerals. Meanwhile, in the 1970s, the area of ice in the Arctic was eight million square kilometers, and by 2007 the area reduced by nearly half, reaching 4.3 million.
The process of melting continues, expanding the way of navigation in the Arctic Ocean. In this regard, representatives of the Russian Defense Ministry dismiss frightening predictions of destabilized relations between the Arctic states, calling the excitement around the glaciers a logical process resulting from the opening of new shipping options.
However, the strengthening of military positions in the Russian Arctic seems very timely.