THE RING OF FIRE IS ROARING TO LIFE

By Illuminator | April 15, 2012 - 3:32 pm |April 14, 2012 General Articles
AND THERE WILL BEEARTHQUAKES OF HISTORIC IMPORTANCE ON THE WEST COAST OF THE UNITED STATES 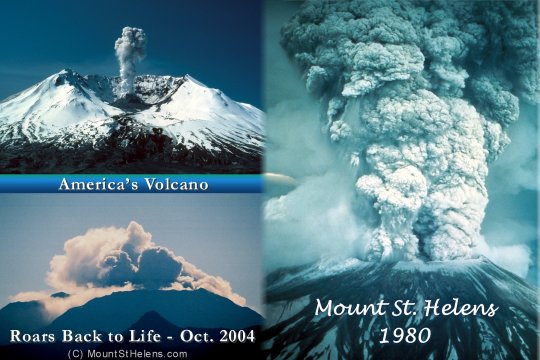 I lived in Toronto when Mount. St. Helens blew back in 1980. Even there, thousands of miles and a mountain range away, we had ash and dimmed sunlight for a few days ~ and awesome sunsets.

Short Canadian vent: One thing bothers me about most American reports on thingsregarding nuclear power, Fukushima, and here regarding the Ring of Fire. Thisstuff does NOT stop at the Washington State/British Columbia border! Canada is affectedtoo. If I weren’t so mature (debatable at times), I take this almost personallysince I live in the areas to be so affected by events. Psst! America! There IS life beyond your own borders!Might I also add, this waking up of the volcanoes may be totally natural, but who is to say that something sinister is not poking it with an icepick? HAARP activity levels of the past few days!

The American Dream
April 14, 2012
Does it seem to you like there has been an unusual amount ofseismic activity around the world lately?
Well, it isn’t just your imagination.
The Ring of Fire is roaring to life and that is really bad newsfor the west coast of the United States.  Approximately 90 percent of allearthquakes and approximately 75 percent of all volcanic eruptions occur alongthe Ring of Fire.
Considering the fact that the entire west coast of the UnitedStates lies along the Ring of Fire, we should be very concerned that the Ringof Fire is becoming more active.  On Wednesday, the most powerful strike-slip earthquake ever recorded happenedalong the Ring of Fire.
If that earthquake had happened in a major U.S. city along thewest coast, the city would have been entirely destroyed.  Scientists tellus that there is nearly a 100% certainty that the “Big One” will hitCalifornia at some point.
In recent years we have seen Japan, Chile, Indonesia and NewZealand all get hit by historic earthquakes.  It is inevitable that therewill be earthquakes of historic importance on the west coast of the UnitedStates as well.  So far we have been very fortunate, but that good fortunewill not last indefinitely.
In a previous article, I showed that earthquakesare becoming more frequent around the globe.  In 2001,there were 137 earthquakesof magnitude 6.0 or greater and in 2011 there were 205.  Thecharts and data that I presented in that previous article show a clear upwardtrend in large global earthquakes over the past decade, andthat is why what happened this week is so alarming.
On Wednesday, a magnitude8.6 earthquake struck off the coast of Indonesia and that was rapidly followedby a magnitude8.2 earthquake off the coast of Indonesia.  Fortunately those giganticearthquakes did not produce a devastating tsunami, but that doesn’t mean thatthose earthquakes were not immensely powerful.
Normally we only see about one earthquake of magnitude 8.0 orgreater per year.  The magnitude 8.6 earthquake was the most powerfulstrike-slip earthquake in recorded history.  If that earthquake hadhappened in the United States, it would have probably been the worst naturaldisaster in U.S. history.  The following is from an article posted onThe Extinction Protocol:

I’venever heard of a strike-slip lateral earthquake of this great a magnitude;especially under water. Preliminary assessment of the Indonesian quakes by U.S.geologists suggests one plate lurched past each other as much as 70 feet. SanAndreas is a strike-slip, latera ~ can we even imagine two sections of groundmoving 70 feet near San Francisco? Had the force of the Sumatra quakes beenunleashed upon San Andreas, the city would have been completely destroyed.

And earthquake activity along the west coast has definitely beenheating up in recent days.
On Wednesday, a magnitude5.9 earthquake struck approximately 160 miles off of the coast of Oregon. 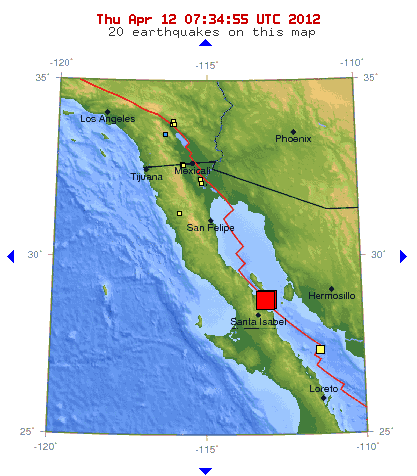 Early on Thursday, there were two major earthquakes (magnitude 6.9 and magnitude 6.2) in the Gulfof California.

It is only a matter of time before the “Big One” hitsCalifornia.
Sadly, most Americans (especially young Americans) can’t eventell you what the Ring of Fire is.  The following is how Wikipedia defines the”Ring of Fire”:

ThePacific Ring of Fire (or sometimes just the Ring of Fire) is an area wherelarge numbers of earthquakes and volcanic eruptions occur in the basin of thePacific Ocean. In a 40,000 km (25,000 mi) horseshoe shape, it is associatedwith a nearly continuous series of oceanic trenches, volcanic arcs, andvolcanic belts and/or plate movements.

The entire west coast of the United States falls along the Ringof Fire and a massive network of faults runs underneath California, Oregon andWashington. 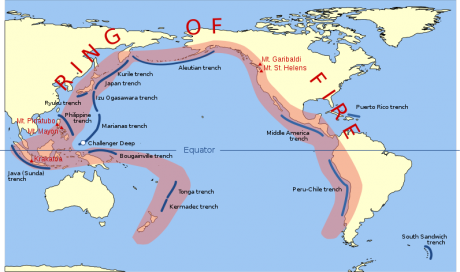 At this point, scientists tell us that the west coast is longoverdue for a major earthquake.  An article in Time Magazine a few yearsago statedthe following:

Californiahas more than 300 faults running beneath its surface, including the massive SanAndreas Fault, yet the quake to end all quakes has yet to occur. In 1980, afederal report declared the likelihood of a major earthquake strikingCalifornia within the next 30 years to be “well in excess of 50%.”

Unfortunately, the truth is that is a very, very conservativeestimate.  The west coast has always been extremely unstable and it alwayswill be.  At some point there is going to be a tragedy of unimaginableproportions on the west coast.
Just hope that you are not there when it happens.
But it isn’t just California, Oregon and Washington that shouldbe concerned.
According to the Arizona Geological Survey, there were 131earthquakes in the state of Arizona in 2011.  That was a huge increasefrom just 53 in 2010.
And of course an absolutely nightmarish earthquake could occuralong the New Madrid fault at anytime, but that is a topic for another article.
As far as the Ring of Fire is concerned, another major threat isvolcanic activity.
One of these days, one or more of the major volcanoes on thewest coast is going to experience a major eruption again.  There have beensigns that Mt. Rainier has been becomingmore active, and a major eruption of Mt. Rainier could potentially beabsolutely devastating for much of the northwest United States. 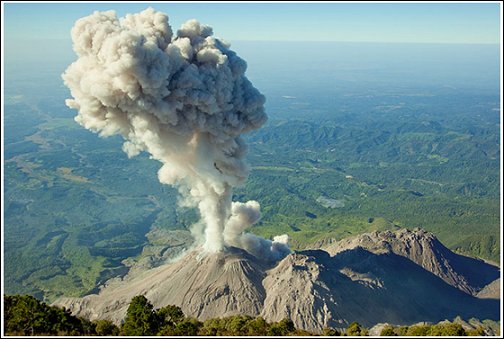 This ash plume from Mt. Fuji reached more than a kilometer in height.
Of even greater concern along the Ring of Fire is Mt.Fuji.  As I wrote about the other day, Mt. Fujihas been dormant for about 300 years but is now rapidly roaring to life. New craters have appeared and these new craters are venting gas.  Therehas been a swarm of earthquakes under Mt. Fuji this year, including a magnitude6.4 earthquake on March 15th.

If Mt. Fuji were to experience a full-blown eruption, theconsequences could be absolutely catastrophic.

Mt. Fuji is not too far from Tokyo – one of the most denselypopulated cities on the entire planet.  The loss of life resulting from afull-blown eruption of Mt. Fuji would be almost unimaginable.
But it is not just along the Ring of Fire that we are seeing arise in volcanic activity.  The truth is that we are seeing a rise in volcanicactivity all over the globe.  The following are just a couple ofrecent examples which have been in the news:

*The volcanoes in Iceland that caused such huge problems a fewyears ago are becoming very active once again.
*Authorities in Colombia have declared a “red alert”and believe that an eruption of the Nevado del Ruiz volcano is imminent.
*Ash isventing at the world famous Anak Krakatau volcano in Indonesia.

Something really strange is going on.
Most scientists will deny it or will attempt to downplay ituntil they are blue in the face, but the truth is that the trembling of ourplanet is getting worse.
If this shaking continues to get worse, there are going to besome absolutely horrific tragedies in the years ahead.
So do you have a theory for why there is so much seismicactivity happening along the Ring of Fire?
Please feel free to post a comment with your thoughts below….
.
GEOLOGICAL UPHEAVAL ~ EARTHQUAKES DISAPPEAR 13,000 METERSOF BEACH IN MEXICO!