Review – Phantom Self (And how to find the real one) 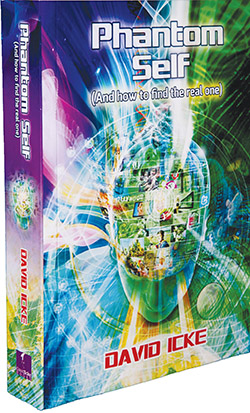 Phantom Self (And how to find the real one)
By David Icke
447 pages, paperback

David Icke has pioneered the use of a digital age vocabulary to describe ancient metaphysical concepts. He is a metaphysician who talks about frequencies, decoding information and software programs as part of our connection to a holographic matrix of conscious energy.

He certainly doesn’t talk like your stereotypical yogi, nor does he write like one. Nevertheless, atop this platform – that we are eternal spiritual beings having a temporary physical experience – Mr. Icke lays the foundation upon which the currently gathering global conspiratorial storm is built. Ultimately, the Conspiracy is about far more than resource control and banking profits. It is about total control of the human experience, our perceived reality, and limiting that experience to within a narrow band of the infinite spectrum.

In the 26 years Mr. Icke has been alerting the world to the consolidation of power into a global police state, he has gone from enduring “record-breaking ridicule” in the mid-90s to seeing many of his warnings come true – like the centralising of power, problem-reaction-solution scenarios, terrorist events “galore,” the vaccine agenda, and a looming global fascist state; claims he made in print, prior to 9/11.

He has political capital to spare, and a series of books in his wake. Yet, like the Conspiracy about which he has been alerting the world, David Icke and his message are gaining momentum. Year after year, Mr. Icke releases new material, compendiums that continue to build upon his previous work – like a life’s work in progress, an ongoing journey.

In his latest, Phantom Self (And how to find the real one), Mr. Icke notes his open-minded approach towards philosophy: “I don’t believe anything in the sense of this-is-how-it-is-and-that’s-that. I have a perception of how things are at any point but I am constantly open to expanding that perception in the light of more information and insight.”

To appreciate Mr. Icke’s work the reader must also approach with an equally open mind, because in the spirit of his previous books, Phantom Self plunges deep down the rabbit hole of Archons, Saturnism, the Demiurge virus, Transhumanism and, of course, shapeshifting reptilian elites.

But Mr. Icke is not necessarily to be believed. It’s unlikely he would encourage his readers to simply believe what he writes. Rather, his books are a launching point for a great number of research pathways. And he has done his homework. His books are springboards for others to do theirs. Rather than a lesson in what to think, Phantom Self is a lesson in how to process information. It would make a good addition to every generation’s reading list – especially the young who have as much an opportunity to march into an awakened future as they do towards a global police state.

What is Phantom Self? It is the ‘you’ that you identify with while you’re in the matrix. It’s your name, your job, your ethnicity and any other category that separates you from everybody else. It’s the ‘you’ upon which limitations are attached.

Or in Mr. Icke’s words: “Phantom Self is an actor who is so confused that he thinks his fictional character is really him.”

In Phantom Self, Mr. Icke calls for a revolution. “Reconnection is the revolution.” Reconnection with Infinite Self. “It’s our natural state to be multidimensional awareness communicating across the frequency scale.”

The first, and arguably most important step towards shattering the illusion and breaking free of the global Conspiracy is reconnecting with Infinite Self. Mr. Icke notes: “The impact of saying ‘I am Infinite Awareness having an experience’ is life-changing…” Perhaps a world full of people awake to their infinite nature might not buy so easily into the looming Transhumanist agenda – an agenda which portends the merging of man and machine, what is touted by some as the next step in humanity’s evolution (or, one could aptly argue, humanity’s devolution).

The Transhumanist agenda is where Phantom Self ultimately leads. Mr. Icke describes it as the culminating manifestation of the “archon virus,” a metaphysical sickness infecting the global population through the agents of the global Conspiracy’s multi-dimensional source. He delves into the Transhumanist artificial intelligence “cloud” – described as an A.I. hive mind that threatens to relieve those connected to it of the burden of independent thought.

It may all sound like an episode of Star Trek, but the books Mr. Icke published some twenty years ago probably elicited the same sort of reaction – and much of what he wrote back then has turned out to be on point. Humanity would do well not simply to listen to Mr. Icke, but to use his decade’s worth of research and hard work as a catalyst for individual investigation.

We live in an awakening world and Mr. Icke, with his tech-savvy tongue, necessarily bridges the divide between our left brain-dominated society and the ancient wisdom that humanity certainly once knew during more balanced times. He’s a quantum metaphysicist whose insights into these times have, again and again, proven to be correct.