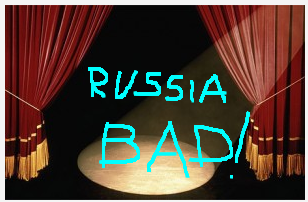 New York Times editors, contributors and correspondents are some of the worst. Russia bashing persists daily.

Discredited correspondent Judith Miller perhaps is Exhibit A. She lied for power. She did it daily for months. She did it disgracefully.

She served up regular anti-Iraq propaganda. She used disreputable sources. They represented a Noah’s Ark of scam artists.

She substituted Big Lies for truth. She claimed nonexistent WMDs. She sank to the level of straight Pentagon press handouts.

Her late 2001 – mid-2003 stories showed a reporter with an agenda. Garbage in. Garbage out. She almost single-handedly spearheaded Bush’s drive for war.

She supported it. She promoted it. She used daily front page feature stories doing it. Strung together, they represented a litany of lies, damn lies, and misinformation.

They continue where she left off. They supported Obama’s war on Libya. They back ravaging and destroying Syria.

Perhaps they want what Paul Craig Roberts calls “final war.” Maybe they’re comfortable about destroying planet earth to save it.

They support wealth, power and privilege exclusively. They do so over popular interests. They do it with disturbing regularity. They do it disgracefully.

They support NATO encroaching close to Russia’s border. They repeat Big Lies about a nonexistent Russian threat. None whatever exists. Claiming otherwise turns truth on its head.

At the same time, he said “(l)ets wait and see” what happens. He doesn’t dismiss the threat of potentially hostile forces massed near Russia’s border.

“The language of the statement reminds one of the battle of words during the Cold War era.”

“It’s not hard to see who is going to benefit from curbing Russia and NATO’s joint work on countering modern threats and challenges to international and European security, in particular in areas like fighting terrorism, piracy, and natural and man-made disasters.”

“In any case, this is going to be neither Russia, nor NATO member-states.”

No military activities “aside from the previously declared.” They’re routine. They’re non-belligerent. Russia has nothing to hide.

It welcomes foreign inspectors “who wished to get acquainted with the real situation in the border regions with Ukraine,” said Lukashevich.

Lavrov was clear and unequivocal saying “(w)e have absolutely no intentions of crossing Ukrainian borders.”

Nothing suggests otherwise. Not according to NYT reports.

He sees what doesn’t exist. General Philip Breedlove claims Russian hoards are within striking distance of Ukraine. They’re “poised to attack on 12 hours’ notice,” he claims. He lied saying so.

They’re able to “accomplish their military objectives within three to five days,” he added.

“What we can say now is that we do see a battalion size unit moving, but what we can’t confirm is that it is leaving the battlefield.”

“Whether that movement is aft to a less belligerent configuration or returning to barracks, we do not see that.”

Breedlove called what remains “a potent mix of warplanes, helicopter units, artillery, infantry and commandos with field hospitals and sufficient logistics to sustain an incursion into Ukraine,” according to The Times report.

It might be a “coercive force,” he added. It’s able to move into Odessa, Transnistria, and intervene in eastern Ukraine areas.

“I think they have all the opportunities and they can make whatever decision they want,” said Breedlove.

He lied claiming “(t)his is a very large, very well-equipped force to be called an exercise.”

They’re silent about their own naked aggression. It’s ongoing in multiple theaters. Post-9/11, it killed millions.

Russia is a powerful force for peace. It’s up against a belligerent monster. It’s headquartered in Washington.

Don’t expect the NYT to explain. It ignores US war crimes. Bashing Russia takes precedence. Breedlove lies were featured. He stated one after another.

He outrageously said Russia used military exercises to mask its planned intervention. Once it begins, it’ll “cut telephone cables, jam communications an engage in cyberwarfare to isolate the Ukrainian military on the peninsula,” according to The New York Times.

Russia uses “snap” exercises to rehearse its ability to assemble substantial combat power in a short period of time,” The Times added.

“They are absolutely able to bring great force to a position of readiness,” said Breedlove.

“That is something that we have to think about: What does that mean geo-strategically that we now have a nation that can produce this ready force and now has demonstrated that it will use that ready force to go across a sovereign boundary?”

Stars and Stripes (S&P) is a Pentagon publication. Propaganda is regularly featured. On April 2, it headlined “Breedlove: Ukraine situation shows need for US forces in Europe.”

He argued for greater US European troop strength “in light of a newly assertive Russia.”

“We think it is ready to go and we think it could accomplish its objectives in between three and five days if directed to make the actions,” he added.

He lied about a nonexistent threat. He said Russian hoards can invade Ukraine within 12 hours and take control in several days.

“Russia expects explanations from NATO of its decision to deploy additional troops in East European states,” he said.

“We have addressed questions to the North Atlantic military alliance. We are not only expecting answers, but answers that will be based fully on respect for the rules we agreed on,” he stressed.

“It is necessary to de-escalate rhetoric which overshoots the mark and crosses into the unreasonable.”

“Russia-NATO relations are based on certain rules, particularly the Rome Declaration, under which no country has a right to deploy additional troops in East European states,” he added.

Doing so is a belligerent act. At the same time, NATO suspended “all practical civilian and military cooperation (with) Russia.”

He wants it to show its “shared security” commitment. He lied claiming Russia confronts European borders “with force.”

“It’s clear the (North Atlantic) alliance is prepared for this moment…We are unified, and the alliance is strong,” he added.

“…Article 5 of NATO’s treaty means what it says on land, air and sea. The United States has already begun” to act.

It augmented its Eastern European presence. It plans more of the same. It “reject(s)” Crimean reunification.

“(W)e have all challenged” what doesn’t exist. Kerry called it the tactics of intimidation, particularly the deployment of unprecedented amounts of military forces around Ukraine’s borders.”

He ludicrously claimed Ukraine is on a path toward “democratic and economic success.”

He cited NATO Secretary General Rasmussen calling events in Ukraine “a wake-up call – a reminder that the stability and security in NATO’s neighborhood requires our constant vigilance.”

“To that end,” Kerry urged “step(ped) up defense spending.”

He outrageously claimed an expanding NATO “open(ed) doors for millions of people who, through the power of this alliance, now are able to experience greater opportunity, a greater prosperity, and greater security.”

“As free nations, we will continue to stand together and stand always in defense of international law, of our mutual security, and of the right of nations and people everywhere to freely choose their own destiny.”

“The US has suspended space cooperation with Russia. Ongoing activity on the International Space Station (ISS) is not affected by this decision.”

“The National Aeronautics and Space Administration (NASA) said on Wednesday that such a decision was taken over the current crisis in Ukraine.”

“According to a NASA’s memo, ‘ongoing violation of Ukraine’s sovereignty and territorial integrity’ prompted the agency to halt contacts with Russia.”

A growing East/West divide deepens. It does so recklessly. A leaked NATO plan calls for joint exercises and training between alliance members and three Eastern European nations – Armenia, Azerbaijan and Moldova.

“We should do everything we can to reassure our friends and colleagues in Latvia, Lithuania, Estonia and Poland that we really believe in their NATO membership and the guarantees that we have given them.”

US forces in Europe web site says they’re designed to “promote regional stability and security, strengthen partnership capacity, and foster trust while improving interoperability between the land forces of Ukraine, and NATO and partner nations.”

Perhaps something sinister is planned this year. Maybe confrontation with Russia.

Days earlier, Vice President Joe Biden warned about Washington invoking NATO’s Article 5 against Russia. It states an attack on one alliance member obligates them all to respond.

Nearby long-range nuclear-armed missiles will be deployed. They’ll target its heartland. Doing so is reckless and dangerous.

Events seem headed in that direction. The worst of all possible outcomes may follow.

“In recent days we have been flooded by signals from Washington that in light of the events in Crimea and Ukraine, the US administration is changing the entire pattern of its dialogue and cooperation with us in a wide range of areas.”

Washington is “seeking to demonstrate its refusal to recognize the free expression of will by the population in Crimea and the decisions adopted by us in connection with it, plans to suspend contacts even in areas where, in our opinion, the continuation of our dialogue meets the interests of the US itself.”