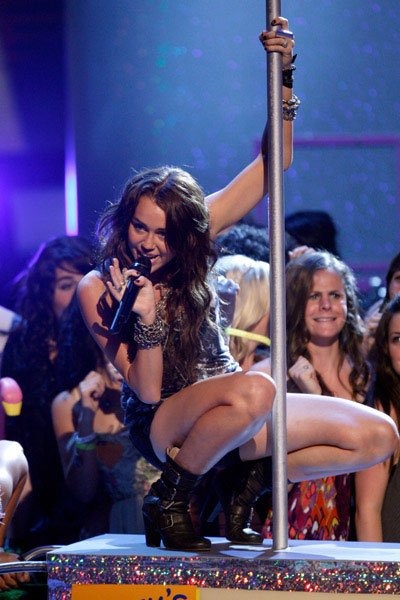 Miley Cyrus was always was a trend setter.

Way back in the day, I knew several women who took to exotic dancing and stripping to make their way through university. Some went on to be lawyers or doctors; to them this was a decision they made AS ADULTS in their early to mid 20’s to finance their education without the future slavery of the student loan system. They got their degrees and moved on to live highly respectable and good lives.

My point is, they made these decisions as ADULTs. They were not teens who could be, in many cases, easily swayed by the lures being offered them for removing their clothes before strangers. I have a problem with this article ~ the sluttification of the female for the titillation of males. These girls will not have the living experience to make wise decisions once they have entered this underworld, no matter how nice and apple pie these organizations try to paint themselves. They fool no one.

If my daughter were was approached by such people, my voice would be raised in objection. Fortunately, mine are beyond this crap and even then they would have been disgusted by such a proposition. But then, I raised them to be, underneath the apparent wildness, confident young women with self esteem and that rare trait ~ common sense. I am not naive.

I know that this goes on but is it really necessary to promote it as “healthy wholesome alternative employment’ to our teens of either gender? What message does this send to their impressionable young selves?

Recruiters of teenage strippers may soon be scouring Toronto high schools in search of female students who can be groomed into disrobing part-time as exotic dancers to earn college tuition.

A flyer praising the benefits of the burlesque trade has been produced to target students in high schools, colleges and universities in the Toronto area, says a group representing dancers and club owners.
The brochure claims working as a dancer pays well, offers flexible hours and makes a “great part-time job to raise college tuition.”
A scramble is underway by the Adult Entertainment Association of Canada to fill a demand for dancers after the federal government this month stopped issuing visas or extensions for foreign strippers to work here. There are up to 800 foreign strippers in Canada and most vow to go underground and work in the sex trade if they can’t dance legally.
The foreign dancers, many of whom are from Eastern Europe and South America, represent about 5% of the 38,000 strippers working in clubs across Canada. Most of them dance in Toronto, Windsor, Ont., London, Ont., Montreal, Ottawa, Winnipeg and Calgary.
Caroline, 28, and Nicola, 25, have been dancing in a downtown Toronto club for more than a year and have tasted the good life, and now don’t want to return to their native Hungary.
“We are not happy that visas are no longer being issued to us,” Caroline said. “I am very disappointed and afraid of what may happen to me in the future.”
The women say they work long hours and send most of their earnings back home to their families.
“We did not do anything wrong in Canada,” she said. “They should not be sending us back home.”
Nicola said she’s stressed out and hasn’t been able to eat since hearing news of the visa revocation.
“My visa is almost expired and I am very scared,” she said. “I am very shattered that I may no longer be able to work and help my family back home.
The association said the visa ban that began July 14 means more Canadian women have to be hired to meet the demand. The new rules will prevent strip clubs, escort services and massage parlours from having access to foreign women.
“They’re destroying the industry by creating a labour shortage,” association director Tim Lambrinos said. “The word ‘exotic’ means foreign and that’s what people want to see.”
The association has created a “six-point action plan” to help keep the dancers in Canada. That includes more recruitment of women in high schools and colleges, lobbying the government for changes and if all else fails, the strippers plan to file refugee claims or marry Canadian citizens to sponsor them.
Lambrinos said girls 18 and older can work as dancers in Ontario, according to advice from their lawyers.
He said recruiters from strip clubs will try to attract students by attending job fairs at high schools, colleges and universities in Toronto and surrounding areas.

“We are already doing some outreach work in some areas,” Lambrinos said. “We will be taking a strippers’ dance pole with us to the schools.”

He said overcrowded Toronto high schools can become a prime recruiting ground for potential dancers.
QMI Agency has obtained a draft copy of the flyer to be circulated to high school students. It advises them that they can earn tuition fees while working as an “exotic dance entertainer” and that no sex with customers is permitted.

“If you are visually appealing and comfortable with your naked body and are comfortable about taking all your clothes off,” the flyer states. “You can be working right now as an exotic dancer and earn your tuition fees for university or college.”
Students are told they must be “comfortable … onstage at a club and disrobing,” and are guaranteed that “no actual sex or sex acts (will) occur.”
It warns them that they will have to provide private dances, or table dances, in dark lounge areas and part-time, full-time or seasonal jobs are available.

Officials of the Toronto District School Board did not return phone calls or e-mails about the proposal despite repeated attempts by QMI Agency. Several high school students said they did not like the idea of strippers being recruited from among their peers.
Foreign dancers said they’re willing to get married to a Canadian citizen or file refugee claims to stay here.
Plans are in place to seek Canadian men to marry some of the strippers whose visas are about to expiry, which could force them to go underground and into the hands of organized crime to work in the sex trade. 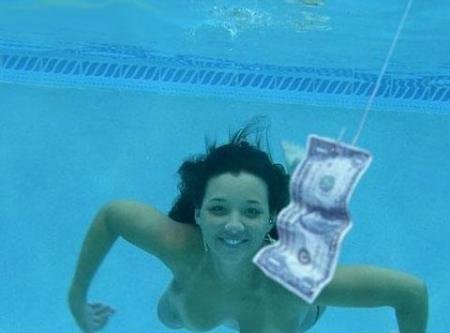 Lambrinos said photographs and descriptions of some the dancers will be posted on the Internet and newspaper ads with text seeking Canadian husbands. Potential hubbies will have to be citizens and not have a criminal record.

“This is very urgent for some of the dancers whose visas are nearing expiry,” Lambrinos said. “Every potential sponsor will be looked at and the girls will make a decision on who they want to marry.”
There will be a phone number and e-mails for the potential husbands to contact their potential brides.
Officials of the Canada Border Services Agency said the scheme can be considered a marriage of convenience, since there is no history of courtship between the couple. If approved, the sponsor will be responsible for his wife for about 10 years in Canada.
“We’re trying to do all we can to keep the dancers here,” Lambrinos said. “The girls themselves have said they are not going back home.”
He said another plan will have the strippers file claims for refugee status and there is no guarantee that they will be accepted.
Immigration officials said filing a claim will allow the women to remain here for more than a year as they challenge the case, but eventuality they will have to leave.
The controversial “stripper visa” dates back to 1998 and allowed hundreds of foreign dancers into the country each year. In 2001, for example, 660 foreign dancers, mostly from Eastern Europe, were admitted.
All they had to do was provide a Canadian job offer from a strip club and prove they were qualified to “dance.”
Roughly 100 of the visas have been renewed each year since 2006.
Support for the program has plummeted ever since MP Judy Sgro, a former Liberal immigration minister, resigned in 2000 after facing accusations that she fast-tracked a stripper who worked on her campaign ~ a scandal dubbed “Strippergate.”
STUDENTS ALREADY STRIPPING TO PAY TUITION: CLUB OWNER
One popular Toronto strip club owner says his stable of exotic dancers include more than a dozen college or university students.
The well-known Toronto businessman, who did not want to be publicly identified, said two of his dancers are studying to become doctors; four are attending law school and six are taking classes to become chartered accountants.
“They just do their job and go home,” the owner said. “They are very intelligent and always show up on time and don’t perform extras.”
Club owners have created a six-point plan of action to recruit strippers as foreign dancers are becoming scarce as their visas can’t be renewed under a new federal law.
They plan on organizing the dancers; stepping up recruitment in high schools, colleges and universities; seeking Canadian husbands to marry those whose visas are expiring; filing refugee claims, lobbying the federal government and working with civil servants