“Iran will practically realize its plan to become a nuclear threshold state, with enrichment (capability), and the ability to develop intercontinental missiles.”

“This combination of enrichment, weapons, and the ability to launch missiles creates a situation where Iran gets everything and gives nothing.”

Reality is polar opposite his rant. Tehran’s program is entirely peaceful. It has no military component. 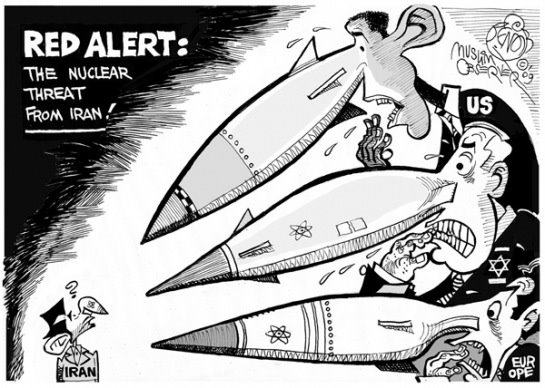 Washington knows it. So do EU partners. Netanyahu manufactures threats. He claims an ballistic missile one. Doing so serves his agenda.

Tehran has missiles able “to target Europe and the US (with) a nuclear payload,” he railed.

He replicates Obama. Both leaders are serial liars. Nothing they say has credibility. They know Iran poses no existential threat.

They know its nuclear program is entirely peaceful. It doesn’t stop them from lying.

Netanyahu wants things reversed. He got Obama to include Iranian missiles in nuclear talks.

It remains to be seen how Iran reacts. Its government has gone all-out to negotiate responsibly. It’s put up with more US abuse than most others ever would.

It’ll take so much and no more. It wants genuine rapprochement. It won’t sacrifice its sovereign rights pursuing it.

Odds favor it rejecting this demand. Or others violating JPA agreed on terms. Obama has other ideas.

It forbids Iran from “undertak(Ing) any activity related to ballistic missiles capable of delivering nuclear weapons, including launches using ballistic missile technology, and that States shall take all necessary measures to prevent the transfer of technology or technical assistance to Iran related to such activities.”

Tehran’s missile program is excluded from nuclear talks. Demanding it be included is provocative. It violates an Iranian red line.

“Nothing except Iran’s nuclear activities will be discussed” in P5 + 1 talks, Zarif stressed. Both sides mutually agreed in Geneva.

Obama doesn’t want longstanding Iranian hostility ended. He could have done so straightaway when entering office.

His June 2009 Cairo speech promised a “new beginning” in US/Muslim global relations. He called it one “based on mutual interest and mutual respect…”

“(B)ased upon the truth that America and Islam are not exclusive, or need be in competition.”

“Indeed, they…share common principles…of justice and progress; tolerance and the dignity of all human beings.”

His comments were demagogic boilerplate. Straightaway in office, he declared war on Islam. He waged it ever since. He continues it today. He does so at home and abroad.

Muslims are public enemies number one. Obama exterminated millions in office. His comment about “support(ing) reform throughout the region” was code language for business as usual.

His “historic opportunity” for change belied waging war on humanity. It continues unabated.

His Cairo speech concealed his scheme to exploit this resource-rich part of the world. Iran ranks third in global oil reserves.

Demanding Iranian missiles be included may end up subverting them. JPA provisions refer only to “addressing the UN Security Council resolutions with a view toward bringing to a satisfactory conclusion (its) consideration of this matter.”

They call for forming a “Joint Commission (to) work with the IAEA to facilitate resolution of past and present issues of concern.”

They say nothing about Iran’s missile program. Or any other weapons system. At issue only are “possible military dimensions” of Iran’s nuclear program.”

Its Panchin facility activities are mentioned with respect to any potential nuclear connection. No evidence suggests it.

“One of the main issues to be determined is the question of whether to include Iran’s ballistic missile program in list of topics to be discussed during the final-status negotiations.”

“While the world powers demand the inclusion of the missile program, saying this falls under the implementation of UN Security Council resolutions, the Iranians insist on excluding the missile program as an area unrelated to the nuclear issue.”

Under Secretary of State for Political Affairs Wendy Sherman heads US negotiations with Iran.

Before talks began, she spoke with French and British representatives. They coordinated their positions.

He stressed Israel’s opposition to any nuclear enrichment on Iranian soil. He demands what JPA provisions don’t stipulate.

On February 4, he challenged Sherman, asking:

“Why did you not…address (Iran’s) delivery mechanisms, the militarizing of nuclear arms?”

“Why was that left off since (Tehran, he baselessly claims,) breached a threshold everyone acknowledges?”

Sherman accepted his lie saying final agreement discussions will include what he wishes. It “has to be addressed as part of a comprehensive agreement,” she stressed.

At the same time, she admitted that preventing an Iranian nuclear weapon “makes delivery systems almost…irrelevant.”

Is Washington trying to sabotage final agreement talks? Will EU partners go along.

Russia’s Deputy Foreign Minister Sergei Rybakov said Moscow “considers that a comprehensive agreement must concern only and exclusively with the restoration of trust in a purely peaceful intention of Iran’s nuclear program.”

In other words, he suggested Russia won’t support efforts to include discussions on Iran’s missile program. It’s not part of JPA. It can’t be included belatedly.

He says claims about Iran’s missile program are wrong. Conventional ones are prioritized. They aim to destroy specific targets.

Expect lots more from Israel and Washington. Expect Iran to defend its rights. Whether it’s enough to agree on final status terms remains to be seen.

Expect Israel to go all-out to prevent it. Obama may have the same objective in mind. By around mid-year, we’ll know one way or another.