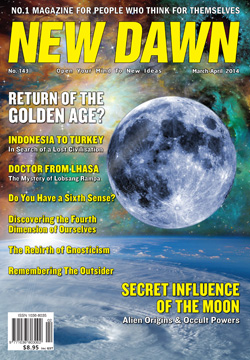 From Indonesia to Turkey

New Archaeological Discoveries Uncover the Mysteries of a Lost Civilisation. Graham Hancock looks at extraordinary new evidence showing human civilisation extends much further back in time than what we’ve been told.

Return of the Golden Age?

Drawing on myth and ancient wisdom, Edward Malkowski explains why the time is ripe to initiate a new Golden Age of unity, abundance and equality.

Building the New in the Shadow of the Old

It’s Time for the Localisation Movement to Get Down to Business! Richard K. Moore explores successful models for the reinvigoration of communities.

The Secret Influence of the Moon

The Life & Work of Colin Wilson (1931-2013). A short overview and tribute by Colin Stanley to the highly influential self-educated author & philosopher.

The Mystery of Tuesday Lobsang Rampa. Walter Mason investigates how the son of a plumber rose to literary fame to become a world renown Tibetan Lama.

The Rebirth of Gnosticism

Richard Smoley speaks to Hollywood’s Gnostic Bishop Dr. Stephan A. Hoeller on key aspects of gnosis and the untold story of the modern Gnostic revival.

Discovering the Fourth Dimension of Ourselves
By Katrina Cavanough

Do You Have a Sixth Sense?
By Dr. David Hamilton

The Word of ONE: Tarot Wisdom of the Ages
By W. Crow

12 Lessons Along the Path to Enlightenment
By David R. Hawkins, Ph.D.

Download your digital copy of this 80 page full colour magazine
(iPad compatible e-book)
for only US$4.95