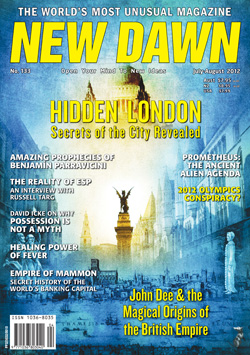 The Reality of ESP

Frank Joseph interviews Russell Targ, perhaps the best known psychic investigator of our time and a pioneer of Remote Viewing.

Andrew Gough takes us on a tour of London uncovering the ancient city’s many mysteries, strange enigmas and occult connections.

An overview of the secret symbols, signs and associations some see as evidence of a conspiracy.

Did Dr. John Dee, one of England’s most intriguing historical figures, not only converse with angels but also unlock the door to the apocalypse?

The Amazing Prophecies of Benjamín Parravicini

Posession is Not a Myth

We Have the Power, Not ’Them’. David Icke recounts his strange encounter with negative entities and shows how we can keep clear of their influence.

Windows to the Sacred: Occult Art in Australia

Robert Buratti introduces little known but important Australian artists whose works act as portals to the collective unconscious and the supernatural.

Secret History of the World’s Financial Capital. Dr. K.R. Bolton reveals how the City of London Corporation became the centre of the global money system.

John Dee & the Magical Origins of the British Empire

Glyn Parry looks at the role of the mysterious alchemist and magician Dr. John Dee in shaping the future of Britain.

The Healing Power of Fever
By Christopher Vasey

Diary of a DNA Potentiator
By Brendan Murphy

Power of the Sovereign Spirit
By Neil Kramer