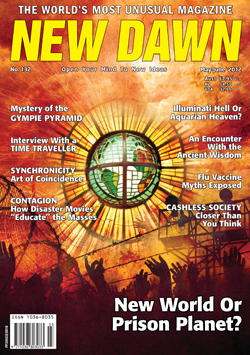 Interview with a Time Traveller

Frank Joseph talks with American author and mystic Von Brashler about his techniques for transcending time and realising higher dimensions.

Is there a connection between the New Age movement and the push for a ’New World Order’? John Lamb Lash separates fact from fiction.

Are you ready to meet the future? Prominent writers and researchers share their perspectives on the signs of the times.

An Encounter with the Ancient Wisdom

Richard Smoley relates his own personal introduction to the ancient wisdom tradition, and the simple things you can do to access this knowledge.

Cultivating Consciousness in an Unconscious World

People are manipulated and most don’t even know it – all because they’re not paying proper attention. Richard Smoley shows you how to take back control.

Evidence of an ancient civilisation in Australia? Gordon De L. Marshall presents the remarkable and little known story of Australia’s own lost pyramid.

Hollywood movies are meant to be entertainment, but sometimes their plots conceal a hidden agenda. Vigilant Citizen exposes the messages they want you to accept.

Tobias Churton examines the life and work of Britain’s notorious magickian and his secret role in guiding the Allies to victory in World War II.

Synchronicity: The Art of Coincidence

An interview with psychologist Dr. Kirby Surprise. He unveils some of the secrets of this amazing experience, and shows you how to harness its incredible power.

Harnessing the Power of Change:
Wisdom from the Ancient Masters
By Keziah Zavael