Prime Minster of Israel, Benjamin Netanyahu, takes his personal agenda to a new low. According to Mr. Netanyahu’s warning at the United Nations, the US needs to be more careful with President Rouhani’s charm because he ”smiles a lot”. The question here is: Is this Netanyahu guy a paid political clown or is he just starting to lose his head because Israel is losing its grip on the Eastern world? I think it could be both. Let’s see what theguardian.com says about it. 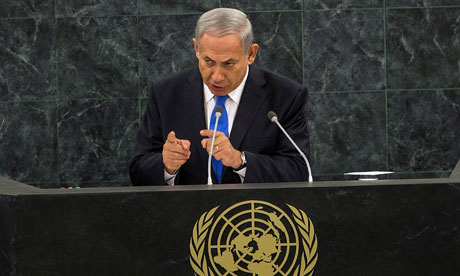 The Israeli prime minister, Binyamin Netanyahu, launched a sustained attack on the new Iranian president Hassan Rouhani on Tuesday, deriding his recent charm offensive with western leaders as a “ruse and a ploy” that was designed to fool the international community into dropping its guard against Iran‘s development of nuclear weapons.

At the end of a week of intense diplomacy at the UN compound in New York in which the overriding focus has been the growing hope of meaningful negotiations with Iran over its nuclear programme, Netanyahu sounded a starkly conflicting note in his address to the UN general assembly. He pounded the Iranian regime and its newly elected president, accusing them of sponsoring terrorism and lying repeatedly over their nuclear weapons ambitions, and exhorting the rest of the world not to be hoodwinked into lifting sanctions on Tehran.

Rouhani’s strategy, he said, was to “smile a lot because smiling never hurts; pay lip-service to peace, democracy and tolerance; offer meaningless concessions in exchange for lifting sanctions; ensure Iran retains sufficient nuclear material and infrastructure to race to the bomb at a time that it chooses.”

He went on: “You know why Rouhani thinks he can get away with this? This is a ruse, a ploy. Because he’s gotten away with it before. He fooled the world once, now he thinks he can fool it again. He thinks he can have his yellow cake and eat it too.”

Israel has been watching the green shoots of improving relations between Iran and the US with growing alarm. Signs of a changing direction were capped by the 15-minute historic phone conversation between presidents Obama and Rouhani last week.

A year ago, Netanyahu stood at the same podium at the UN general assembly and presented a cartoon-like representation of a Iranian nuclear bomb, with a red line drawn near its peak. At that time, talk of a possible unilateral Israeli air strike on Iran was a dominant subject of diplomatic conversation.