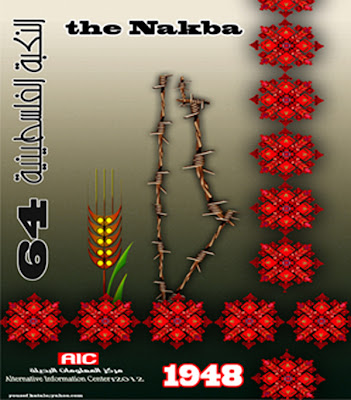 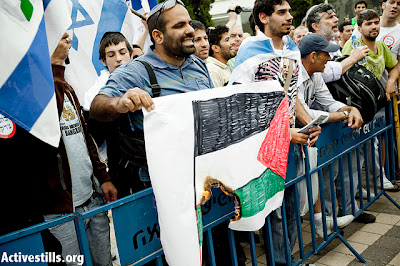 Kahanist burning a Palestinian flag during an event to commemorate the Nakba at Tel Aviv University on May 14, 2012. Hundreds of right-wing Israel nationalists, many of whom openly identified as followers of Rabbi Meir Kahane’s racist ideology predicated on the need to “transfer” Palestinians out of the land, descended on Tel Aviv University to protest an event to commemorate the Nakba, the displacement of hundreds of thousands of Palestinians in the war which led to the establishment of the state of Israel.
Photos by: JC/Activestills.org 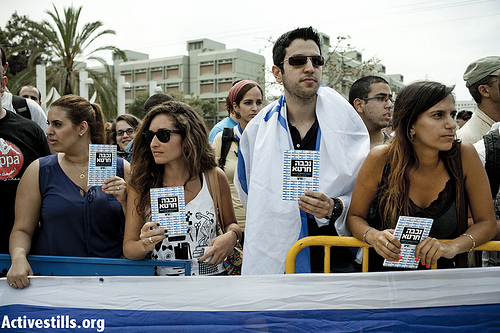 Kahanist showing copies of Im Tirzu’s pamphlet “The Nakba lie” during an event to commemorate the Nakba at Tel Aviv University on May 14, 2012.
Can a democracy censor?
Despite Western-propaganda, the answer is yes.

The sign reads “When I arrived to this land there were no Palestinians” by Golda Meir
The events surrounding 9/11 and the wars against Afghanistan and Iraq are a good example of that.
Despite American media sanctimonious claim of being balanced, one won’t find a balanced report on these issues.
When was the last time the Taliban’s leader got the Times’ front page?
How can censorship in a democracy be achieved?
Let’s answer this question by illustrating the topic with a current event. In the case of Israel, how can the state censor events linked to Nakba Day? Oddly enough ~ and I would be accused of anti-Semitism if I were to add the obvious ~ Israel does that through the Ministry of Finances. 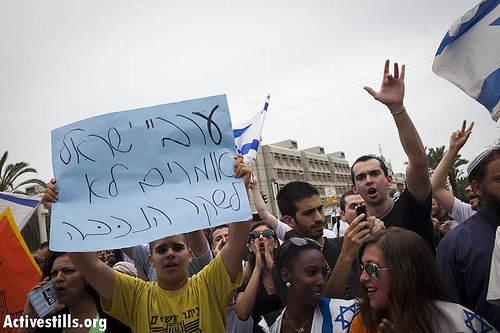 This sign reads: “Israeli Arabs say NO to the lie of the Nakba” ~ HUH????
PALESTINIAN PR VICTORY”
Nakba Day is the “Disaster Day” on May 15, when Palestinians remember Israel’s Independence declaration.
.
Israelis celebrate it at a different date. Formally, civil affairs in Israel are conducted using the Hebrew calendar, thus official events change in their Gregorian date because the Hebrew calendar is lunar in nature, meaning it wobbles in cycles of 19 years.
On all official documents issued by Israel, the Hebrew date is proudly stated; however, since this calendar wobbles, everybody uses the Gregorian calendar as the main reference calendar. This includes offices from the Israeli Administration; all appointments with them are arranged using the Gregorian calendar.
Most of the calendars sold in Israel show the Gregorian date in large digits and the Hebrew date in small ~ almost illegible ~ digits. Actually, most Israelis would fail if asked to list the names of the Hebrew months in their correct order. “Independence Day is in April or May” they’ll say hesitantly, mixing up the Hebrew and Gregorian calendars.
Since the Palestinians stick to Gregorian dates, they have an easy job promoting Nakba Day, a much easier task than Israelis face with the wobbling Yom Haatzmaut, Independence Day (see Is this Israel’s last Independence Day?).
THE ZIONISTS’ DEEPEST FEAR

“Yom Hanakba” Nakba Day Logo by Zionist Channel 7 note the Hebrew letters styled as Arabic ones
The extent of mind-control the Israeli administration attempts on the population it rules is astonishing.
Prime Minister Golda Meir claimed Palestinians do not exist, and expected the people to answer: “amen!” Things didn’t improve much since her departure; for many years possessing a Palestinian flag ~ even if hidden in a dark drawer ~ was a punishable crime in the state claiming to be “the only democracy in the Middle East.”
The Zionist leaders’ deepest fear is that their people will realize they have been deceived by them; they fear that the people will realize that the Zionist dream is nothing but a hollow, meaningless dream built atop solid Palestinian structures. 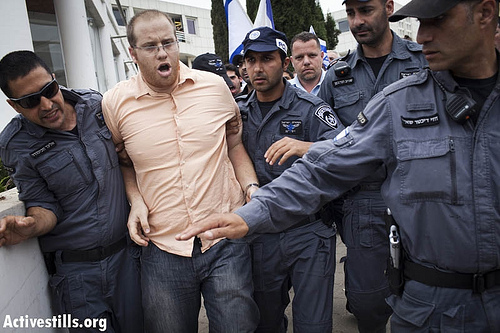 Police arrest a Palestinian student after the attack of the right wingers.
After all, most of the Israeli towns had been built by Palestinian workers. Thus, the attempt to suppress the commemoration of events like Nakba Day was to be expected. Considering the extent of the protests taking place on that day across Israel, the task was herculean even for roughish Zionist administrators.
The logo below belongs to the Settlers’ Channel 7 (see “Juden Raus!” says Israel) and was featured in their articles covering the Nakba Day this year. Even the settlers ~v who often draw maps of the West Bank which ignore Palestinian cities ~ cannot ignore this event.
BEGINNING ADMINISTRATORS’ ERROR
On paper, the Israeli administration gave a “proper Zionist Answer,” (“tshuva tzionit olemet” in Hebrew). This is a popular phrase used in Israel against any event that is perceived as a threat. It implies violence, though nothing specific is said.
In this case, the implied violence came in the form of state censorship of an event it dislikes; beginner administrators as they are, they thought that by controlling the people’s pockets, they will gain control of their minds. On Monday 14, 2012, they woke up into their worst nightmare.

Tel Aviv University’s dean of students had previously approved a ceremony to commemorate Nakba Day in the plaza adjacent to the “Naftali” social sciences building. However, University security services decided that due to the “possibility of disturbances,” the event will be held at “Antine Square,” located next to the University’s main entrance.
The pictures brought here are from the protests; the distinctive buildings of the university dormitories across the street can be clearly seen.

“Every year different political bodies organize events focusing on the Nakba, in an attempt to make it the focal point of relations between Jews and Arabs in the area. What has never been done, and the time has come to do it, is to commemorate the Nakba in an alternative way, accessible to and created for the Israeli public ~ an event to remember the tragedy and great loss that befell the people who were here before ’48, many of which still live here,” said Noa Levy, a law student and organizer of the Nakba Day ceremony.

The pictures are incredible.
The fact that 400 participants crowded the small plaza and that they read an alternative version of Yizkor, the Jewish prayer of mourning is even more so.
The names of pre-1948 Palestinian villages inside what is today Israel, were read and the event included a moment of silence.
For non-Israeli readers I must clarify this resembles very much Holocaust Day. 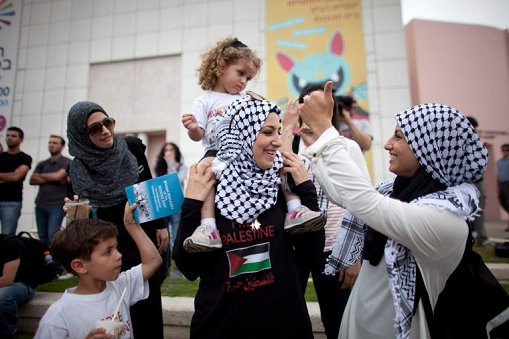 Left-wing Israeli and Palestinian students take part in a ‘Nakba Day’ ceremony held outside the Tel Aviv University on May 14, 2012 in Tel Aviv, Israel. Generally commemorated on May 15, the day after Israeli Independence Day, Nakba Day or “day of the catastrophe” is an annual event that Palestinians hold in honor of the estimated 700,000 displaced that followed the 1948 Palestine War. (Uriel Sinai/Getty Images)
Could the contrast between these two groups, the Nakba Memorialists and the right wing extremists be any greater than these photos show?
Following this, the horrified Israeli government might declare a new Holocaust Day to commemorate the defiling of its Independence Day by its own citizens.
Said the minster’ spokesman, while referring to the university’s decision to allow the event,

“The education minister is of the opinion that the decision is wrong and infuriating.”

Beginners and unprofessional as they are, the Israeli administrators forgot to cover in their censorship law spontaneous events that come out of people’s warm hearts and not out of cold government’s budgets.
However, if expanding on this one may be denounced as anti-Semite by the censoring, undemocratic, Israeli government. Isn’t that so, Mr. Netanyahu?
RIGHTISTS DISRUPT NAKBA CEREMONY AT TEL AVIV UNIVERSITY
I asked a young man (wearing an Israeli flag as a cape) why he came to disrupt the event and what bothered him. “If they want to protest they should do so in their universities in Bir Zeit and not at my university.” He added that his problem is not so much with the Arabs here but with the Jews showing solidarity with them. When asked why not respect the right of these citizens of Israel to conduct their ceremony in peace without disruption, he and others responded that it is a democratic country and he can scream and shout all he wants. “We came here with the specific goal of disrupting the event,” he said.