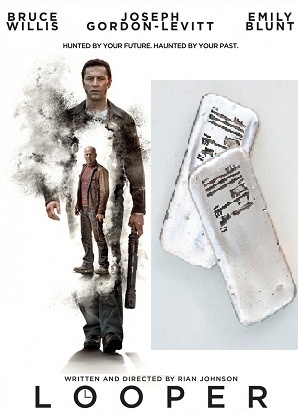 In the futuristic thriller “Looper” the assassins are paid in silver bars.

By 2044, the United States has suffered economic collapse, causing severe social decay and growth in organized crime. In addition, a strange mutation has occurred in 10% of the population, giving them limited telekinetic powers. In 2074 time travel is invented, but is immediately outlawed. In addition, tracking technology has rendered it nearly impossible to dispose of bodies secretly, so when crime bosses want to eliminate a target they send them back to the past to be killed by “loopers”: hired guns paid in silver to kill whomever is sent to them. When crime bosses want to end a looper’s contract, they send the looper’s future self back to be killed by his past self, called “closing the loop”, where they are given gold instead of silver pay to retire for thirty years before being sent back in time to be killed.

Silver is strong, malleable and ductile. It is a superb conductor of electricity. It is endlessly useful, with applications in industry, medicine, photography, the arts and, yes, speculation.

Gold may well be a better monetary asset, but the white metal has many more practical uses, from the arts to medicine. And its consumption exceeds its output.

Alot of people have begun hoarding gold and silver in anticipation of the looming global economic collapse. I tell you friends it is better to store seeds than to foolishly invest your money in metals you cannot eat.

They will throw their silver into the streets, and their gold will be an unclean thing. Their silver and gold will not be able to save them in the day of the LORD’s wrath. They will not satisfy their hunger or fill their stomachs with it, for it has made them stumble into sin.

Bill Gates is investing millions in a seed bank on the Barents Sea near the Arctic Ocean. Will you be investing in seeds, guns, or ammunition? The collapse is near, plan accordingly.