More Lawless US Sanctions on Russia 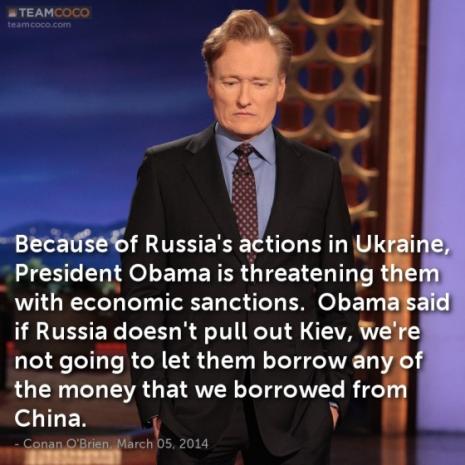 “Since April 17, Russia has done nothing to meet its Geneva commitments and in fact has further escalated the crisis.”

“Russia’s involvement in the recent violence in eastern Ukraine is indisputable.”

“Consequently, today the United States is imposing targeted sanctions on a number of Russian individuals and entities and restricting licenses for certain US exports to Russia.”

“In addition, the Department of Commerce has imposed additional restrictions on 13 of those companies by imposing a license requirement with a presumption of denial for the export, re-export or other foreign transfer of US-origin items to the companies.”

“Further, today the Departments of Commerce and State have announced a tightened policy to deny export license applications for any high-technology items that could contribute to Russia’s military capabilities.”

“Those Departments also will revoke any existing export licenses that meet these conditions.”

Fact: Sanctions on Russia have no legitimacy whatever.

Fact: They have no legal standing.

Fact: They expose Washington’s dark side.

Bilateral ruble/renminbi trade weakens dollar strength. It’s a pillar of America’s geopolitical/military might. It furthers US supremacy. It does so at the expense of other nations.

It facilitates corporate takeovers. It does so at the expense of beneficial social change, human and civil rights. It denies democratic values.

Global central banks recycle dollar inflows. They do so into US Treasuries. They finance America’s deficit. It matters with QE diminishing. Perhaps ending.

Imagine petrodollar might becoming a shadow of its former self. Imagine destructive US policies waning.

Imagine mighty America going the way of all previous empires. It’s not a matter of if. It’s when. It’s by what means. Sooner or later it’s coming. It can’t happen a moment too soon.

“The United States announced new sanctions against Russia in relation to the events in Ukraine.”

Washington “suspended cooperation with Russia in the field of combating drug trafficking and in the space industry (except for the International Space Station project), and introduced restrictions for supplying military and double-purpose products to Russia,” said Itar Tass.

EU countries “blacklist(ed) another 15 people.” EU Council members targeted “those responsible for the lack of reduction of tension in the east of Ukraine.”

EU states blacklisted 48 Russian officials to date. They’re banned from EU travel until November. Their Western bank accounts, if any, are frozen.

“Unilateral exterritorial sanctions are illegitimate in nature,” he said.

“Not only do they not conform to the norms of civilised interstate communication and the practice of international relations, but they also run counter to international law.”

“By making this decision, the United States was guided by absolutely distorted and unfounded perceptions regarding the events in Ukraine and around it.”

“Washington is pouring oil on the flames but has done nothing, has not taken even one step to bring its proteges in Kiev to their senses.”

“The new attempt at diktat and ultimatum undertaken by America against us will add no chance for a constructive resolution of the problems.”

“The demands the protesters are putting forth in the eastern regions of Ukraine are absolutely legitimate.”

“Instead of exerting pressure and making attempts to impose certain solutions, the United States should get preoccupied with more intensive and substantive work with its clients in Kiev in order to normalise the situation.”

Putin aide Andrei Belousov said sanctions imposed “are insignificant. There may be some short-lived effects, but they are unlikely to have any serious annual impact.”

“Thanks to Western sanctions, Russia has been given the incentive to reduce its dependence on outside and instead regional economies are being more self-sufficient.”

Perhaps other significant trading partners will join them. Perhaps Washington and rogue EU partners shot themselves in the foot.

Perhaps the worst of all possible outcomes. Stay tuned for further updates.