MONSANTO AND PHILIP MORRIS SUED OVER BIRTH DEFECTS IN ARGENTINA 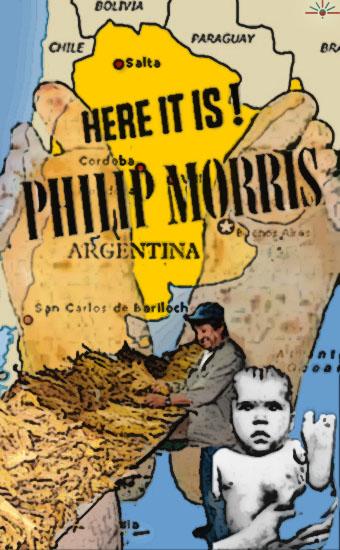 OCCUPY MONSANTO
WILMINGTON, Del. (CN)
Monsanto, Philip Morris and other U.S. tobacco giants knowingly poisoned Argentinean tobacco farmers with pesticides, causing “devastating birth defects” in their children, dozens of workers claim in court.
The farmers, on their own behalf and for their injured children,sued Altria Group fka Philip Morris Cos., Philip Morris USA, Carolina LeafTobacco, Universal Corporation fka Universal Leaf Tobacco Company, Monsanto, and their affiliates and Argentine subsidiaries, in New Castle County Court.
The farmers grow tobacco on small family-owned farms in Misiones Province and sell it to U.S. tobacco distributors. Most of Argentina’s tobaccois grown in Misiones, a rural northeastern province.
The farmers claim the tobacco companies asked them to useherbicides, pesticides and other toxic products made and distributed by Monsanto, and assured them the products were safe.
They say the defendants “wrongfully caused the parental andinfant plaintiffs to be exposed to those chemicals and substances which theyboth knew, or should have known, would cause the infant offspring of theparental plaintiffs to be born with devastating birth defects.”
Birth defects cited in the 55-page complaint include cerebralpalsy, psychomotor retardation, epilepsy, spina bifida, intellectual disabilities, metabolic disorders, congenital heart defects, Down syndrome,missing fingers and blindness.
The farmers claim Philip Morris and Carolina Leaf used a tobaccobrokerage company, Tabacos Norte, to buy tobacco from the farmers and sell themcrop production supplies, including herbicides and pesticides.
Tabacos Norte, based in Misiones, was created by Carolina Leafand Philip Morris’ Argentine subsidiary in 1984, to produce tobacco fit for the North and South American markets, according to the complaint.
The farmers say the tobacco companies that bought their cropsasked them to replace the native tobacco with a new type, used in Philip Morriscigarettes, which required more pesticides.
They say the defendants pushed for excessive use of pesticidesand failed to warn them of the dangers or provide them with information orprotective gear.
ED: This icy legal logic being that if you provide them withprotective gear, you are aware that there is a problem beforehand.  And how can you truthfully deny that of whichyou are not aware?
Most farmers in Misiones used Roundup, a glyphosate-basedherbicide made by Monsanto, to kill weeds and clear tobacco fields, accordingto the complaint.
Monsanto and Philip Morris told them to use glyphosatefrequently and in quantities beyond that necessary for effective weed control,the farmers say.
“Monsanto defendants, the Philip Morris defendants, and theCarolina Leaf defendants promoted the use of Roundup and other herbicides totobacco farmers in Misiones even though they were on direct and explicit noticethat at all relevant times farmers in Misiones, including the instantplaintiffs, lacked the necessary personal protective equipment and other safetyknowledge and skills required to minimize harmful exposures to Roundup,” the complaint states.
“What is more, at all relevant times Tabacos Norte, the Monsantodefendants, the Philip Morris defendants, and the Carolina Leaf defendants didnot recommend protective measures to farmers and their families in Misiones. Infact, aforementioned defendants actively recommended and/or required thatcontracted tobacco farmers, including the instant plaintiffs, purchaseexcessive quantities of Roundup and other pesticides.
“At all relevant times, defendants were on direct and explicitnotice that fruits, vegetables and farm animals designated for familyconsumption would be contaminated with pesticides including Roundup if contractfarmers followed the defendants’ aggressive chemical application specifications for tobacco cultivation.” Monsanto’s pesticides contaminated the farmers’non-tobacco crops, water wells and streams meant for family use, exposing their families to the toxic substances, the farmer say.
“The plaintiff tobacco farmers’ lack of training and instructionon the safe disposal of unused Roundup and other pesticides caused furtherexposure,” the complaint states. “Leftover pesticides were discarded inlocations where they leached into the water supply.”
The farmers claim their exposure to the pesticides caused theirchildren’s birth defects.
They claim that Monsanto and the tobacco companies, “motivated by a desire forunwarranted economic gain and profit,” ignored health risks associated withpesticides.
The farmers seek compensatory and punitive damages fornegligence, product liability, breach of warranty, ultra hazardous activity,aiding and abetting, willful and wanton misconduct and violations of Argentinelaws.
Their lead counsel is Ian Connor Bifferato.
Via:Occupy Monsanto