She’s like the old Health and Human Services chief. She’s Sylvia Mathews Burwell. More on her below. 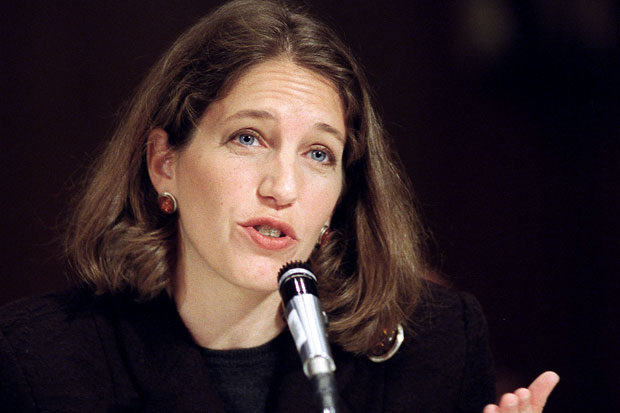 Kathleen Sebelius is out. She said she resigned. Maybe she was pushed. Obamacare claimed its latest victim. She served as chief architect. She presided over its disastrous rollout.

It’s rife with unacceptable inequities. It does nothing to control costs. They’re spiraling out-of-control. They’re increasingly unaffordable for growing millions.

If employers don’t provide it, consumers are out of luck. They’re forced to choose from among unacceptable options.

They require buying insurance or be penalized. In 2014, it’s $95 per person up to 1% of family income, whichever is greater.

It’s a boon to predatory providers. It should be. They wrote legislation mandating it. It assures they benefit at our expense.

It lets them game the system for profits. It lets them rip off consumers unaccountably. It offers a confusing array of plans.

They’re privately run. Most leave consumers paying around 40% of costs out-of-pocket. It’s after spending thousands of dollars on huge premiums.

Costs vary by state and the negotiating power of exchanges. Prescription drug coverage isn’t all inclusive. Some medications aren’t covered.

Perhaps treating serious illness or paying rent. Perhaps damned one way or another. ACA makes America more than ever unfit to live in.

She committed “to growing the Kansas economy and creating jobs.” She said “every Kansas child (deserves) quality education.”

Before becoming HHS secretary, she pledged support for “our people hav(ing) access to the highest quality, most affordable health care.”

She promised one thing. She delvered another. She enforced policies polar opposite what she pledged. It didn’t surprise.

As Kansas governor, she betrayed her constituents. She left behind a string of broken promises. Perhaps why Obama chose her for HHS chief.

Her agenda was pro-business. She supported cuts in state corporate income and property taxes. She endorsed repealing Kansas’ estate and corporate franchise taxes.

She prioritized making Kansas investment friendly. She was notably anti-populist. She remained so in Washington.

She was predatory healthcare giants best friend. She served them at the expense of all others. She created an enormous scam. She leaves behind a huge mess.

Healthcare reform in America has a deplorable history. Lobbyists get what they want at our expense.

It was either in the form of federally-subsidized state programs or through Social Security. Medical opposition was considerable.

In the 1950s, views changed. Employer-provided coverage grew. In 1965, Medicare and Medicaid followed. So did calls for reform later on.

In 1993/94, Clinton addressed the issue. He did so unsuccessfully. Hillarycare featured managed competition/marketplace medicine.

It empowered providers over consumers. It provided an illusion of proper coverage. It excluded tens of millions altogether.

Obamacare shows how little they matter. As long as America’s business is business, expect profits to keep trumping human need.

“The president wants to make sure we have a proven manager and relentless implementer in the job over there, which is why he is going to nominate Sylvia.”

Healthcare giants will be in good hands on her watch. She’s part of the system. It’s why Obama chose her. She’s currently Office of Management and Budget (OMB) director. She’s been so since April 2013.

Previously she headed the Bill and Melinda Gates Foundation Global Development Program. Their foundation is the world’s largest charity.

It invests in companies involved in causing health problems it claims to combat. It’s unapologetic doing so.

Over 40% of its investments run counter to its claimed charitable goals. Its holdings include dozens of America’s greatest polluters.

They’re responsible for respiratory and numerous other diseases. Gates invests for profits.

Healthcare and other human needs don’t matter. His Global Development Program operates the same way. In 2001, Burwell joined his foundation.

From 1998 through January 2001, she was Clinton’s deputy OMB director. In March 2013, Obama nominated her for his OMB chief.

She’s a former Rhodes Scholar. She’s a Council on Foreign Relations and Trilateral Commission member. Her other affiliations include:

• the University of Washington Medicine board;

• the Task Force on Transatlantic Relations for the Council on Foreign Relations, Inc.;

• University of Virginia’s Governing Council of the Miller Center of Public Affairs.

Burwell is a US power community member in good standing. She’ll fit right in at HHS.

She’ll pick up where Sebelius left off. Her job is serving predatory healthcare providers.

It’s benefitting them at the expense of consumers. It’s prioritizing profits over human need. Her track record shows she won’t disappoint.