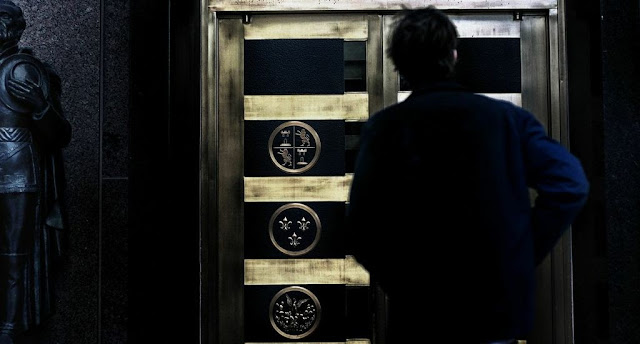 .sWineDriveR. makes a photo set available called Masonry and Related, Austin/Dallas, including some shots taken on my visit to Austin which inspired my Lone Star Republics post.

Please check them out and then go onto the other brilliant photo sets.

This last monument has an interesting history.  Presented to the city in 1961 as a kind of weird tie-in to Cecil B. DeMille’s The Ten Commandments, it led in 2005 to

a United States Supreme Court case involving whether a display of the Ten Commandments on a monument given to the government at the Texas State Capitol in Austin violated the Establishment Clause of the First Amendment.

The court ruled it didn’t.  What intrigued me about the monument is that the tablets have another image of the tablets contained within them, in a strange lettering.  Looking into this I came across the following post.

Of course, those pictured in the DeMille film are those pictured in miniature on this monument.  The writer of the first post I ran across is Avrahaum Segol, a Jewish activist who sees the monolith and the film as an attempt to Christianize the Ten Commandments and promote Christianity.  He may have a point.  I’ve actually written about Segol before.  He was the guy who

claims the swastika shape of Wesley Acres in Decatur pays homage to the German scientists who came to nearby Huntsville after World War II and designed the rockets that put Americans on the moon.

Segol’s got a hard graft ahead of him:

In any event, a less shrill history of the FOE monuments can be found here:

THE REAL HISTORY OF THE TEN COMMANDMENTS PROJECT, OF THE FRATERNAL ORDER OF EAGLES.

Fraternal Order of Eagles stated mission is to unite fraternally for mutual benefit, protection, improvement, social enjoyment and association, all persons of good moral character who believe in a Supreme Being to inculcate the principles of liberty, truth, justice and equality, to perpetuate itself as a fraternal organization and to provide for its government as it’s Constitution, Laws, Rituals, by-laws or other rules and regulations may from time to time provide, and to promote the general welfare, the Fraternal Order of Eagles ordains this constitution.

The mission and officers listed here lead me to believe the FOE was influenced a great deal by Freemasonry. Phoenix Masonry furnishes an initiation ritual. If you’re familiar with Masonic ritual, you can decide for yourself if it influenced the FOE, or not.

Anyway, check out the pics and clamor for more!