Silenus told Midas that there was another continent besides the commonly known ones.He said there was “a country where gold and silver are so plentiful that they are esteemed no more than we esteem iron.” St. Clement, in his Epistle to the Corinthians, said there were other worlds beyond the ocean.Diodorus Siculus said that the Phoenicians discovered “a large island in the Atlantic Ocean, beyond the Pillars of Hercules, several days’ sail from the coast of Africa. This island abounded in all manner of riches.The soil was exceedingly fertile; the scenery was diversified by rivers, mountains, and forests. It was the custom of the inhabitants to retire during the summer to magnificent country houses, which stood in the midst of beautiful gardens. Fish and game were found in great abundance; the climate was delicious, and the trees bore fruit at all seasons of the year.” The ancient Greek poet, Heslod, described the world before the “fall” saying, “Man lived like Gods, without vices or passions, vexation or toil. In happy companionship with divine beingsthey passed their days in tranquility and joy, living together in perfect equality, united by mutual confidence and love. The Earth was more beautiful than now and spontaneously yielded an abundant variety of fruits. Human beings and animals spoke the same language and conversed with each other (telepathy). Men were considered mere boys at a hundred years old. They had none of the infirmities of age to trouble them and when they passed to regions of superior life, it was in a gentle slumber.”

“The religion of the Atlanteans, as Plato tells us, was pure and simple; they made no regular sacrifices but fruits and flowers; they worshipped the sun.In Peru a single deity was worshipped, and the sun, his most glorious work, was honored as his representative. Quetzalcoatl, the founder of the Aztecs, condemned all sacrifice but that of fruits and flowers.The first religion of Egypt was pure and simple; its sacrifices were fruits and flowers; temples were erected to the sun, ‘Ra’, throughout Egypt. In Peru the great festival of the sun was called ‘Ra’−mi. The Phoenicians worshipped Baal and Moloch; the one represented the beneficent, and the other the injurious powers of the sun.”-Ignatius Donnelly, “Atlantis and the Antediluvian World” Homer, Plutarch, and many other ancient writers mention islands situated in the Atlantic “several thousand stadia from the Pillars of Hercules.” Pillars, obelisks, and towers have all been shown to have Masonic significance.Hercules performing his twelve labors has been shown to reference the Sun, the mushroom, and consciousness in general.So are the pillars of Hercules real or metaphorical?Is Atlantis real or metaphorical?Is it both?

During a chance meeting with a Native American wisdom-keeper on a New Mexico hiking trail, author Gregg Braden was told the following story: 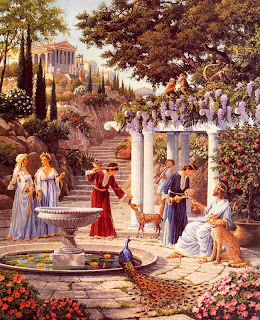 “A long time ago, our world was very different from the way we see it today. There were fewer people, and we lived closer to the land. People knew the language of the rain, the crops, and the Great Creator. They even knew how to speak to the stars and the sky people. They were aware that life is sacred and comes from the marriage between Mother Earth and Father Sky. In this time, there was balance and people were happy. Then something happened. No one really knows why, but people started to forget who they were. In their forgetting, they began to feel separate – separate from the earth, from each other, and even from the one who created them. They were lost and wandered through life with no direction or connection. In their separation, they believed that they had to fight to survive in this world and defend themselves against the same forces that gave them the life they had learned to live in harmony with and trust. Soon all of their energy was used to protect themselves from the world around them, instead of making peace with the world within them. Even though they had forgotten who they were, somewhere inside of them the gift of their ancestors remained. There was still a memory that lived within them. In their dreams at night they knew that they held the power to heal their bodies, bring rain when they needed to , and speak with their ancestors. They knew that somehow they could find their place in the natural world once again. As they tried to remember who they were, they began to build the things outside of their bodies that reminded them of who they were on the inside. As time went on, they even built machines to do their healing, made chemicals to grow their crops, and stretched wires to communicate over long distances. The farther away they wandered from their inner power, the more cluttered their outer lives became with the things that they believed would make them happy. No one knows how the story ends because it isn’t finished. The people who got lost are our ancestors, and we are the ones who are writing the ending.” -Gregg Braden, “The Divine Matrix” (5-8)