LG Promises to Stop Spying on People with Its Smart TV 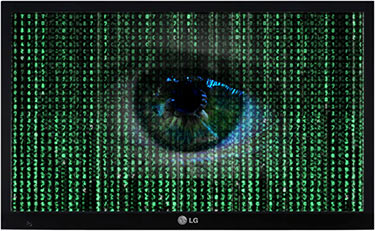 The electronics company LG has apologized to consumers this week for spying on them with its new smart TV sets.

According to the BBC, “LG has admitted it continued collecting data on viewing habits even after users had activated a privacy setting designed to prevent it”:

LG stressed that the information gathered was not personal but viewing information.

“This information is collected as part of the Smart TV platform to deliver more relevant advertisements and to offer recommendations to viewers based on what other LG Smart TV owners are watching,” the firm said.

But IT consultant Jason Huntley’s own investigation not only seems to prove LG is lying about the data collected not being personal, Huntley may have proof LG broke the law:

Despite disabling an option called “collection of watching info”, Huntley discovered that unencrypted details about each channel change had still been transmitted to LG’s computer servers in South Korea.

He then attached an external hard drive to the TV’s USB slot, and found the name of each media file stored on the drive – including photos labelled with his children’s names – had been sent back to LG. (source)

All those old cartoons from the ’50s that made the home of the future look so awesome never told us about this part, did they?

All this personal data is going somewhere…it isn’t just being collected for no reason, and it’s never as simple as the explanation given, is it?

Back in March of last year, Wired reported that former CIA Director David Petraeus could hardly wait to spy on people through their appliances when he was discussing how this is all a part of the coming “Internet of Things” — a future where everything is technologically connected to everything else:

Items of interest will be located, identified, monitored, and remotely controlled through technologies such as radio-frequency identification, sensor networks, tiny embedded servers, and energy harvesters — all connected to the next-generation Internet using abundant, low-cost, and high-power computing,” Petraeus said, “the latter now going to cloud computing, in many areas greater and greater supercomputing, and, ultimately, heading to quantum computing.”

Petraeus allowed that these household spy devices “change our notions of secrecy” and prompt a rethink of “our notions of identity and secrecy.” All of which is true — if convenient for a CIA director.

Gee, the smart grid is so much fun so far.

Value your privacy? Did you know that, in the future, even the garbage you throw away will have data attached to it that will be collected and analyzed in real-time? Everything you do inside (and outside) of your wired smart home will be tracked, traced and monitored.

Melissa Melton is a writer, researcher, and analyst for The Daily Sheeple, where this first appeared, and a co-creator of Truthstream Media. Wake the flock up!