KINDERGARTNER THROWS TANTRUM AT SCHOOL, IS HANDCUFFED BY POLICE 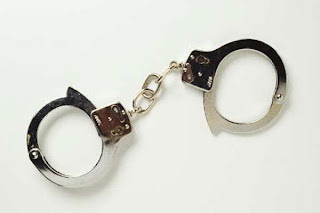 Milledgeville, Ga., police are defending their decision to usehandcuffs to control a 6-year-old’s violent outburst. (Los Angeles Times / April 17,2012
The real story is the public reaction to this…… Standing with the police? Parents have been charged for swatting a child’s bottom for running into traffic yet this sort of thing …handcuffing of children…. is defensible? I have worked in schools and witnessed a tantrum or two equal to what is described here.
By Rene Lynch
LA Times
April 17, 2012
The news coming outof Georgia today revolves around a 6-year-old kindergartner who threw such aviolent tantrum that school officials called police, who handcuffed her for herown safety.But the real story is this:

Many people aresiding with police.

“I agree with the school, let the police cuff her. If anyone at the schoolwould have touched her the parents would have sued and said how wrong theywere,” said one commenter at WMAZ-TV in Georgia, where coverage of the story is leading to a livelydiscussion on parenting skills.Some commenters said they’re outraged at the notion of a kindergartner inhandcuffs, but many others are lining up behind the commenter who said the girlwas plenty old enough to know right from wrong:

“This childneeds to know there are consequences to your actions.”

Here’s what happened, according to WMAZ:Officials at Creekside Elementary School in Milledgeville, located in centralGeorgia, called police on Friday to report that pupil Salecia Johnson was outof control. They said they had first tried to call her mother, but couldn’treach her.

School officials told WMAZ that they feared the child was a danger to herselfand others. She was crying, tearing items off the wall, biting a door knob,trying to break a glass frame and jumping on top of a paper shredder. At onepoint, she reportedly knocked over a shelf, injuring the school principal,according to the Associated Press.

When police arrived, they tried to calm the girl, but she began acting outagain ~ and was handcuffed. Milledgeville Police Chief Dray Swicord defendedthat decision.

“Our policy is that any detainee transported to our station in a patrolvehicle is to be handcuffed in the back. There is no age discrimination on thatrule,” Swicord told WMAZ.

The child was handcuffed and taken to the police station until her parentscould retrieve her, outraging her relatives.

“A 6-year-old in kindergarten. They don’t have no business calling thepolice and handcuffing my child,” Earnest Johnson, the girl’s father, toldWMAZ. The child’s mother said the girl suffers “mood swings” but thatwas still no reason for authorities to treat her so harshly.

“She might have misbehaved, but I don’t think she misbehaved to the pointwhere she should have been handcuffed and taken downtown to the policedepartment,” the girl’s aunt, Candace Ruff, told the TV station.