The Bible talks about sacred “Manna” that the Israelites ate in the desert. Many clues are given as to just what Manna is. The Bible says Manna was a small round edible object that appeared on the ground after dew had fallen. If the Manna was left out in the Sun too long it would breed worms and stink. Exodus 16:14 reads, “And when the dew that lay was gone up, behold, upon the face of the wilderness there lay a small round thing, as small as the hoar frost on the ground.” Exodus 16:20 continues, “…some of them left of it till the morning, and it bred worms, and stank.” The small, round, edible objects which when left in the Sun rot, breed worms, and stink are none other than mushrooms. 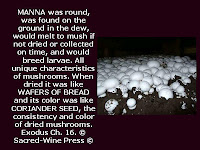 “Manna was thought of as being produced miraculously (IE: birth without seed). This is aperfect botanical description of a mushroom. Birth without seed (miraculous) is due to sporesbeing microscopic and not visible to the naked eye.Jesus describes the Mannas in detail in the book of John. In this story Jesus attempts to make clear; of manna, there are twodifferent ones/kinds. He describes the manna that he is giving the disciples (last supper) as the Manna that bestows immortality. His statement, unless you have eaten his flesh/body (Soma/Manna), and drink of his blood (Soma Juice), you have no life in you, takes on a whole new meaning in light of this discovery.The Manna is directly associated with the fruit of theTree of Life in the 2nd chapter of the bookof Revelation. It is the reward for those who overcome (the lies of the world). The ‘Fruit of the Tree’, the ‘Hidden Manna’ and the ‘Small White Stone’ are spoken of separately, but in the same context. All of these are symbols for the Amanita muscaria.”-James Arthur, “Mushrooms and Mankind” (16-17) 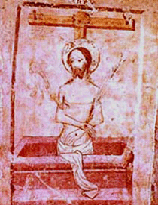 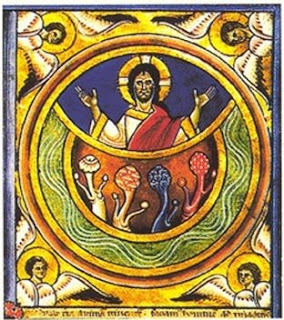 Priests and pastors vehemently deny that “the truebread, the bread from heaven” is a mushroom, but have a difficult time explaining it as literalbread.Bread is not a small, round thing found dew-covered in the wilderness. Nor does it contain any of the mystical properties bestowed upon it. This is undeniably a reference to the magic mushroom. 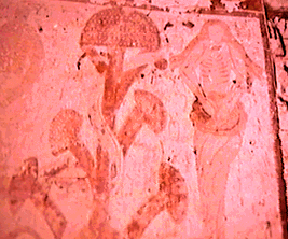 “The concept of the literal ingestion of the body of God is highly downplayed by religious scholars of today. The body (soma) being a fleshy Mushroom is much more palatable thantrying to stomachcannibalism or the transformation of ordinary substances. Many questions should be asked about this cosmopolitan idea of the ‘Sacramental Substance’. Unfortunately, the religious experts shun the notion, insisting that the entire idea is nothing more than symbolic. A symbol points at something else, not usually at another symbology. The Catholic church, in the early 1100’s, decided to have the final word on this subject by establishing (under Emperor/Pope Innocent III) the ‘Doctrine of Trans-Substantiation’. This is whereby, the Priests, by their assumed holy power, claim to be able to say some magical words, and turn ordinary bread into the literal ‘Body of God’. This event is one of the biggest evil deceptions of all time, is an undermining of the basic esoteric aspects of the religion, and is, arguably, the most horrible and damning event to ever happen to Christendom, and as such the entire human race. Jesusclearly describes the Manna that he calls his body in the book of John. Repeatedly describing the ‘Thing/Manna’ as a substance hidden from the world, but revealed to his disciples. Understanding the last supper story becomes as simplistic as it gets, if you know how to decipher the event. Adamantly; Jesus says, ‘Take and eat, This is my Body.’”-James Arthur, “Mushrooms and Mankind” (18) 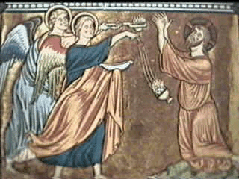 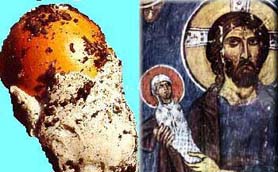 Jesus says this is my body, this is my blood, and lest ye drink/eat of this you have no life in you! These are strong words, thus it is important to realize that the substances Jesus referred to are not communion wafers and grape wine. The amanita had long before Christianity been known as “the flesh of the gods” and “the blood of the gods” and this is what is meant. 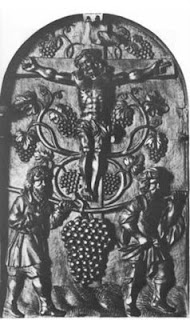 “This is saying pretty clearly that the eating and drinking is physical. My body is flesh indeed, and my blood is drink indeed, and the added statement that when you eat, it is inside of you leaves little room for debate that this is a substance, not a phantom symbol alone. For those who choose to debate this I ask that they show me their substance because according to Jesus’ words unless you eat and drink of ‘It’ you have no life in you. By the way, do I really need to mention that this is not some strange reference to Cannibalism? I surehope not, if you still think this, read on. Somewhere, some of this must convince you that he is not saying to take a bite out of his arm, or any other piece of his actual anatomy … In my opinion, the magical act of ‘Trans-Substantiation’ has no merit. The statement that Jesus makes ‘Unlessyou eat and drink you have no life in you’ would seem to condemn the replacement of whatever the real thing is with a placebo (substitute).”-James Arthur, “Mushrooms and Mankind” (29-30) 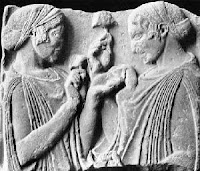 Shiva the Hindu god is a hermaphrodite with one testicle, a penis, vagina, and one breast. This is another personification of the mushroom just like Mithra. The first stage of the mushroom is considered male as it looks like a penis. Then the stem pushes the ball/uterus/breast up out of the egg. As the arms of the mushroom cap open to the sides, it’s as though the female aspect opens from the male “rib.” 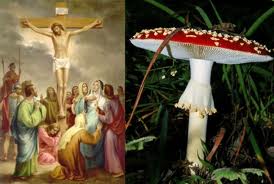 Jesus, likeKrishna, Dionysus, and the other mushroom gods, stands with legs together, wears a crown of thorns, and a sash on his waist while being crucified. His legs together with arms outstretched on the cross make the same “T” shape as the mushroom during its optimum Round Table stage. The sash worn by Jesus is the ruffle found halfway up the stem of all amanitas, and Jesus’ thorny crown is the thorny mushroom top. The reason Jesus is crucified and tells us to eat his body is that the mushroom must die for us to eat it. 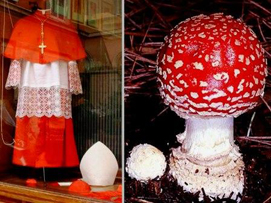 “The fact that the mushrooms must be dried before consumption is another euphemism of the god needing to die, or sacrifice himself, to save mankind through atonement (at-one-ment) …It can be argued that if you trace all of the gods back through time it may be possible to find the original. This original resides in the myths of the gods themselves, as those aspects that remain the same. ‘Take and eat, this is my body’ is the central theme. All of the ancient god myths contain some sort of a sacramental food, and anthropomorphically this food becomes, at some point, a personification of the god itself.”-James Arthur, “Mushrooms and Mankind” (53) 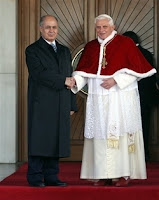 Jesus dies for your sins. Sin was originally an archery term meaning “to miss the mark.” The mushroom dies so you may eat it, and the introspective experiences it brings washes away your sins. You understand how you’ve “missed the mark” in life. This is the original meaning, but theChurch has perverted this idea into a guilt mechanism, scaring people with hell and trapping them to “repent” in confession booths.

While on the cross, Jesus is stabbed in the rib and his blood comes out and is collected in the Holy Grail. This idea of a “side wounded savior” was a common theme among pre-Christian gods. TheVaticanand Templars have promoted the idea that the Shroud of Turin, the Spear of Longinus/Destiny, and the Holy Grail are actual artifacts, but in fact they are all occult symbolism from ancient mushroom mythologies. 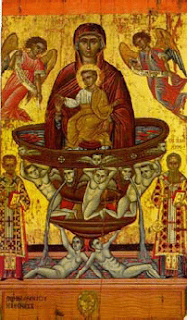 “The active ingredients of the amanita mushrooms are not metabolized by the body, and so they remain active in the urine. In fact, it is safer to drink the urine of one who has consumed the mushrooms than to eat the mushrooms directly, as many of the toxic compounds are processed and eliminated on the first pass through the body. It was common practice among ancient people to recycle the potent effects of the mushroom by drinking each other’s urine. The amanita’s ingredients can remain potent even after six passes through the human body. Some scholars argue that this is the origin of the phrase ‘to get pissed,’ as this urine-drinking activity preceded alcohol by thousands of years. Often the urine of tripped-out reindeer would be consumed for its psychedelic effects. This effect goes the other way too, as reindeer also enjoy the urine of a human, especially one who has consumed the mushrooms. In fact, reindeer will seek out human urine to drink, and some [Siberian] tribesmen carry sealskin containers of their own collected piss, which they use to attract stray reindeer back into the herd.”-Dana Larsen, “The Psychedelic Secrets of Santa Claus” Cannabis Culture, Marijuana Magazine, Dec 18th, 2003
Is this why you often see stone water fountains with little boys urinating into upturned levels looking like mushrooms? Jesus isoften depicted holding up a white flag with a red cross on it, the symbol of the Knights Templar/Masons. Do the red and white flag of Jesus and clothing of the Knights Templar refer to the amanita muscaria? 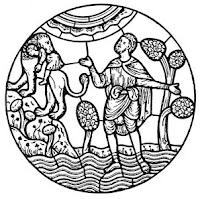