How to Profit During High Inflation

Anyone with a technical degree will admit that college programmed them to consider “sell” a dirty word—to think salespeople use trickery to lure consumers into buying things they don’t need. It makes no difference whether it’s an investment product or a Pet Rock; anyone involved with selling or its evil twin marketing is guilty until proven innocent. 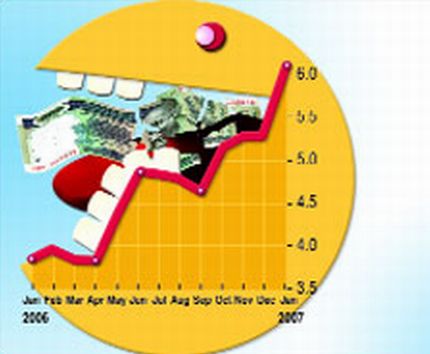 I spent the majority of my first career in sales and marketing, where I focused on negotiations and pricing. My clients included 40 of the top 500 US corporations. Now I work alongside some of the best economists and analysts in the world, and well, let’s just say I bring a different perspective and experience base to our meetings.

That difference became apparent during a recent discussion on how our subscribers can protect themselves and even profit from inflation. We were all in agreement on several key points:

–The government cannot continue to print money as it is without high inflation resulting.
–Traditional investments like precious metals will soar when the world finally discovers the US dollar is worthless. Own them, be patient, and when it hits, what a ride it will be.
–Billions of dollars will flow out of the stock market as interest rates begin to rise.

Certain companies and industries fare better than others in an inflationary environment. Success means investing in those companies whose stock prices and dividend appreciation will grow ahead of the rate of inflation, giving investors true gains.

Investors should look for:

Take oil companies and airlines, for example. When oil companies notice some saber-rattling in the Middle East, the price at the pump can go up a nickel or more the next day. Contrast that with the airline industry, which does a very poor job in this regard.

Why do air travel and gasoline—both considered commodities—perform so differently when their costs are rising? The major oil companies understand market dynamics as well as any industry I’ve served. If an event is going to cause their costs to rise for whatever reason, it only takes one company to raise its prices, and the competition immediately follows. Market share is generally unaffected, but the entire industry makes money.

Price fixing is illegal, and that’s not what oil companies are doing. Go to the Weather Channel, surf around, and you can find the best gas prices in any given ZIP code. If you’re a dealer, you adjust your prices accordingly. After all, how far is a customer going to drive to save a couple cents per gallon when gas is priced over $3/gallon? It sounds crazy, but gas customers don’t have as much mobility as one might think. They risk spending more in gas driving around than they might save at the pump.

The airlines used to do the same thing when they were a regulated industry. One company would announce a fare increase, and all the competition would follow. Now unregulated, some airlines have significant cost advantages over their competition. A few years ago, Southwest Airlines made a huge bet on the direction of fuel prices and guessed right. It had a terrific advantage over the competition, and it was reflected in its pricing.

Unlike a driver needing gas, an air traveler has time to hop on the Internet and compare airfares quite easily, and price is a major factor when buying a plane ticket. While costs increase in the industry, those who maintain a cost advantage over their competition use that as an opportunity to increase their load factor. Instead of raising prices quickly, they lag behind. Fill just two or three more empty seats on a flight, and that income is straight profit. It is a very difficult industry in which to pass through cost increases quickly. Instead, for years the industry has scrambled to cut costs to remain profitable.

At this point, I shared what I consider to be the best place to look for companies that will beat inflation with the team. I started with two fundamental truths about cost and pricing:

–In business, the cost of producing your product or service should tell you only one thing about how you should set your price: specifically, the price you don’t want to sell it for.
–The selling price should be the value of your goods or services in the mind of the customer, as tempered by competition.

Too many businesses set their selling price as a formula called “cost plus,” which is the wrong way to go about it. Your cost information tells you when you’re losing money on every sale. There are companies that price their goods below cost with the intention of building up enough volume to bring their unit cost down in order to become profitable. Sometimes it works. But the sooner it does so the better, because these companies cannot continue losing money forever.

Take Amazon.com, for example. It used price as its main competitive advantage for years, delivering few if any profits for the better part of a decade as it grew. There can really be only one strong price leader, and that leader will condemn itself to being a low-margin, low-profit business so long as it competes on price alone.

From a marketing perspective, there are two different types of markets: concept and brand markets. In a concept market, a new idea, technology, philosophy, or methodology is sold. A brand market is an established market where competitors are fighting for market share.

The iPad is an easy example. The iPad was a new concept called a tablet computer. The competition was a different technology—an expensive notebook computer, your home computer, or a smartphone. In a concept market, many times you’re creating a market (tablets) at the expense of another market (portable computers). Personal computers, for their part, completely destroyed the typewriter market.

Apple is a great marketing company, its technology is excellent, and it understood it could price the new gadget below its true competition (computers) and still make terrific margins.

As a new market is created, competition sees the opportunity and jumps in. In the early stages, it validates the concept, and the total market growth accelerates even faster. Competition normally prices its product under the pricing umbrella of the market leader. At the same time, they may drop off a feature or two to keep their costs down. That further reinforces the market leader as the technology leader.

Eventually the market is created, and competition begins fighting for market share. Look at what’s happened to the printer business. Printers have now turned into a commodity—almost a disposable product, really. The market is now a brand market. Capitalism creates competition, which benefits the consumer. Each competitor is trying to convince consumers that their brand is better than the competition’s, and price is an important factor in that contest.

The next thing I look at is who dominates the market. You may be surprised to find the company with the highest quality and highest price is also a low-cost producer because they have the lion’s share of the market. Rather than cut price, Apple continues to upgrade the quality of its products to keep the competition in continual catch-up mode as opposed to leapfrogging their technology.

Because the dominant market leader provides the pricing umbrella for the industry, this creates an interesting Catch-22 in an inflationary environment. As production costs rise, the longer the dominant player hangs on, the more difficult it is for the competition, because they cannot pass on their cost increases to the consumer. If they raise prices, they will lose market share. Once the big boy announces a price increase, the rest of the market generally follows.

The dominant market leader also recognizes there are certain segments where price is a major consideration. There is now a market niche for basic, low-cost tablets. If the leader tries to cut its price to capture that segment, it has to determine how much additional share it would gain to offset the margin loss on the share it currently has. In addition, there are laws concerning predatory pricing, meaning pricing your products with the intention of driving your competition out of business. Concept sellers are generally content to open up a new market, and expect some loss of market share as it matures.

Let’s look at some real numbers:

Apple’s share price rose with the iPad very well, and it’s holding good margins. Now the iPhone5 is out, and the company is hoping for similar results.

There are many examples of concept sales in the technology sector; however, concept sales take place in many markets. One of our holdings in the Money Forever portfolio has developed a new type of noninvasive medical test that gives better results with much less trauma to the patient. Its main competition is not a similar test, but rather the older, less-effective technology. As this new test becomes the standard, various brands will begin fighting over market share. In the meantime, the company is rapidly growing and maintaining excellent profit margins along the way. In turn, its shareholder value is really accelerating.

There are countless TV commercials for products and services like online dating services, reverse mortgages, or hair color for men, all of which are still in the concept stage. The companies are all still selling their idea as opposed to why they are better than the competition. Much of their success will depend on the size of the market they create with their ideas. Direct competitors offering a lower price to garner market share is of little concern.

Companies that create new concepts by finding large markets with needs begging for solutions will prosper. That’s one reason the technology sector is ripe with these success stories. How many products do we use today that were not even invented 20 years ago?

Our research team is constantly on the lookout for concept sellers in all markets throughout the world. Those who recognize the opportunity ahead of the crowd (before we learn about them on television) will see some extraordinary gains. They will thrive in any market, even during high inflation.

Concept sellers range from smaller companies with new ideas or technologies to huge companies like Apple or Sony that develop new products to fill needs they see in the market. When one finds a need and develops a product that’s in high consumer demand, its stock will generally rise, even in a tough market, and its gross margins will be protected because it can more easily pass cost increases to the customers.

You can beat inflation. While the market is a lot tougher than it was a decade ago, those who make the modest time commitment necessary to research and learn can stay ahead of the curve.