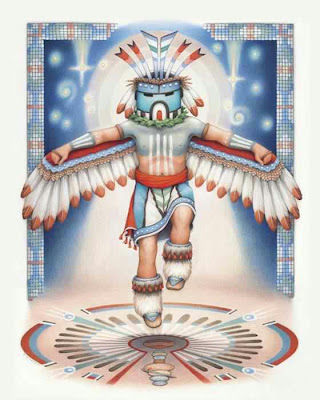 An ancient Hopi Indian prophecy states, “When the Blue Star Kachina makes its appearance in the heavens, the Fifth World will emerge”. This will be the Day of Purification. The Hopi name for the star Sirius is Blue Star Kachina. It will come when the Saquasohuh (Blue Star) Kachina dances in the plaza and removes his mask.

That time is not far off. It will come when the Saquasohuh (Blue Star) Kachina dances in the plaza and removes his mask. He represents a blue star, far off and yet invisible, which will make its appearance soon. (Some Hopi spokespersons suggest that Hale-Bopp is the Blue Star.)

The Emergence to the future Fifth World has begun. It is being made by the humble people of little nations, tribes, and racial minorities. ‘You can read this in the earth itself. Plant forms from previous worlds are beginning to spring up as seeds. This could start a new study of botany if people were wise enough to read them. The same kinds of seeds are being planted in the sky as stars. The same kinds of seeds are being planted in our hearts. All these are the same, depending how you look at them. That is what makes the Emergence to the next, Fifth World.

The following is an excerpt from LAST CRY  Native American Prophecies & Tales of the End Times, by Dr. Robert Ghost Wolf © 1994-2004 It has appeared in numerous articles over the web, and in magazines all over the world.

It was told to me that first the Blue Kachina would start to be seen at the dances, and would make his appearance known to the children in the plaza during the night dance. This event would tell us that the end times are very near.  Then the Blue Star Kachina would physically appear in our heavens which would mean that we were in the end times.

In the Final days we will look up in our heavens and we will witness the return of the two brothers who helped create this world in the birthing time. Poganghoya is the guardian of our North Pole and his Brother Palongawhoya is the guardian of the South pole. In the final days the Blue Star Kachina will come to be with his nephews and they will return the Earth to its natural rotation which is counter clock wise.

This fact is evidenced in many petraglyphs that speak of the Zodiac, and within the Mayan and Egyptian pyramids. The rotation of the Earth has been manipulated by not so benevolent Star beings . The twins will be seen in our North Western skies.  They will come and visit  to see who still remembered the original teachings  flying in their Patuwvotas, or flying shields.  They will bring many of their star family with them in the final days.

The return of the Blue Star Kachina who is also known as Nan ga sohu  will be the alarm clock that tells us of the new day and new way of life, a new world that is coming.  This is where the changes will begin.  They will start as fires  that burn within us, and we will burn up with desires and conflict if we do not remember the original teachings, and return to the peaceful way of life.

Not far behind the twins will come the Purifier  The Red Kachina, who will bring the Day of Purification. On this day the Earth, her creatures and all life as we know it will change forever.  There will be messengers that will precede this coming of the Purifier.  They will leave messages to those on Earth who remember the old ways.

The messages will be found written in the living stone, through the sacred grains, and even the waters. ( Crop Circles have been found in ice) From the Purifier will issue forth a great Red Light.  All things will change in their manner of being.  Every living thing will be offered the opportunity to change from the largest to the smallest thing.

Those who return to the ways given to us in the original teachings, and live a natural way of life will not be touched by the coming of the Purifier.  They will survive and build the new world. Only in the ancient teachings will the ability to understand the messages be found.

It is important to understand that these messages will be found upon every living thing, even within our bodies, even within a drop of our blood.  All life forms will receive the messages from the twins.. those that fly, the plants, even the rabbit.  The appearance of the twins begins a period of seven years  will be our final opportunity to change our ways.  Everything we experience is all a mater of choice.

Many will appear to have lost their souls in these final days.  So intense will the nature of the changes be that those who are weak in spiritual awareness will go insane, for we are nothing without spirit. They will disappear, for they are just hollow vessels for any thing to use.  Life will be so bad in the cities that many will choose to leave this plane.  Some in whole groups.

Only those who return to the values of the old ways will be able to find peace of mind.  For in the Earth we shall find relief from the madness that will be all around us.  It will be a very hard time for women with children for they will be shunned, and many of the children in these times will be unnatural.  Some being from the Stars some from  past worlds, some will even be created by man in an unnatural manner and will be soulless.  Many of people in this time will be empty in Spirit they will have Sampacu.  No life force in their eyes.

As we get close to the time of arrival the Purifier there will be those who walk as ghosts through the cities, through canyons they will have constructed in their man made mountains.  Those that walk through these places will be very heavy in their walk, it will appear almost painful as they take each step  for they will be disconnected from their spirit and the Earth.

After the arrival of the twins, they will begin to vanish before your eyes like so muck smoke.  Others will have great deformities, both in the mind and upon their bodies.  There will be those who  would walk in the body that are not from this reality, for many of the gateways that once protected us will be opened, there will be much confusion.  Confusion between sexes, and children and their elders.

Life will get very perverted, and there will be little social order, in these times  Many will ask for the mountains themselves to fall upon them just to end their misery.  Still others will appear as if untouched by what is occurring.  The ones who remember the original teachings and have reconnected their hearts and spirit. Those who remember who their mother and father is. The Pahana who have left to live in the Mountains and forest.

When the Purifier comes we will see him first as a small Red Star which will come very close and sit in our heavens watching us.  Watching us to see how well we have remembered the sacred teachings.

This Purifier will show us many miraculous signs in our heavens  In this way we will know Creator is not a dream.  Even those who do not feel their connection to spirit will see the face of creator across the sky.  Things unseen will be felt very strongly.

Many things will begin to occur that will not make sense, for reality will be shifting back in and out of the dream state.  There will be many doorways to the lower world that will open at this time. Things long forgotten will come back to remind us of our past creations.  All living things will want to be present for this day when time ends, and we enter the forever cycle of the Fifth World.

We will receive many warnings allowing us to change our ways from below the Earth as well as above.  Then one morning  in a moment.  We will awaken to the Red Dawn. The sky will be the color of blood, many things will then begin to happen that right now we are nor sure of their exact nature. For much of reality will not be as it is now.

There will be many strange beasts upon the Earth in those days, some from the past and some that we have never seen. . The nature of mankind will appear strange in these times we walk between worlds and we will house many spirits even within our bodies  After a time we will again walk with our brothers from the Stars, and rebuild this Earth But not until the Purifier has left his mark upon the universe.

No thing living will go untouched, here or in the heavens. The way through this time it is said is to be found in our hearts, and reuniting with our spiritual self. Getting simple and returning to living with and upon the Earth and in harmony with her creatures.  Remembering that we are the caretakers, the fire keepers of the Spirit. Our relatives from the Stars are coming home to see how well we have fared in our journey.