By Daurade | July 27, 2013 - 8:47 am |September 25, 2013 Uncategorized
Back in 2010, an LoS post entitled Mein Kampf Vindaloo consisted of this weird quote:
Dimple Kumari, a research associate in Pune, has not read Mein Kampf but she would wear the Hitler T-shirt out of admiration for him. She calls him “a legend” and tries to put her admiration for him in perspective: “The killing of Jews was not good, but everybody has a positive and negative side.”
The BBC article explains:

Slowly but steadily, a decade-old business around the dead and universally despised dictator Adolf Hitler is emerging as a small-scale industry in India.

Books and memorabilia on the German leader’s life have found a steady market in some sections of Indian society where he is idolised and admired, mostly by the young.
This came flooding back to me when I read a HuffPo article about a chicken joint in Bangkok called “Hitler”, whose logo is a parody of KFC’s Colonel Sanders.  To whit:

According to the article, KFC is considering legal action  It goes on to say:
Alan Robertson, 43, who lives in Bangkok, told The Daily Mail the chicken was “pretty good” and said a server told him the proprietors thought Hitler was a “good image.”
A good image?  Apparently, in Thailand this explanation has wings.  CNN reports that “Hitler chic” is all the rage in Thailand, where young people sport T-shirts with cartoonish Hitler images on them:  Smurfs, Teletubbies, Ronald McDonald, etc. are mashed up with Hitler to produce weird hybrids.
Westerners may be shocked, even incensed.  Locals are oblivious.  This is normal….trendy….fun….
Somehow this seems logical in a city renowned for prostitution named “Bangkok”.  A pun at which anglophones can titter, but which in Thai of course, means squat.
2010.  Back in India, a clothing store in Ahmedabad called “Hitler” got a lot of people riled up, and the German and Israeli diplomatic missions got involved.  According to the proprietor, he didn’t know Hitler was responsible for the deaths of so many, or what his ideology represents.  He just wanted to honor his grandfather, who was called Hitler because he was so strict.
Notice the swastika in the photo isn’t at the same angle as in the Nazi version.  In fact, what we see as totally shocking in this context is perfectly acceptable in India, where it’s a sacred symbol dating back millennia before Adolf and Co. were flying it.

Again, Westerners are aghast, but I’d bet many young Indians sincerely don’t know who Hitler was.  And why should they?  Can you tell me the name of any Indian political figure besides Nehru and Gandhi, who were alive 60 years ago….anything recent?  No?  It’s only the second-most populous nation in the world we’re talking about.  Ponder that over your next hamburger….

I also assume the owner was unaware of the irony of having a “Superman” T-shirt in the window….. 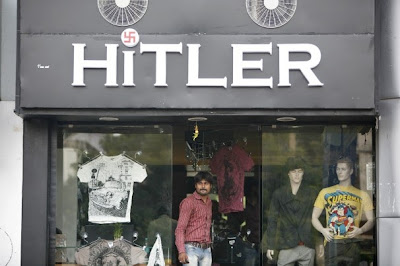 2006.  In Mumbai, a restaurant called Hitler’s Cross (in Mumbai) not only featured a “correct” Nazi swastika in the logo, but was decorated in red, white and black and an enormous portrait of the man himself was hanging inside.  Again, an outcry caused the restaurant to reconsider the name.  Oddly, a lot of local dignitaries and celebrities were at its inauguration, with nary a peep. 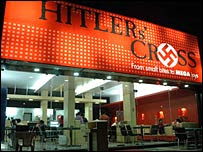 “When asked by a news reporter if he felt disturbed by the name of the restaurant, [actor Murli Sharma]: “I am not really agitated as I have not read much about the man (Hitler). However, from what I know about Hitler, I find this name rather amusing.”

The restaurant is now called the Cross Café.  One of the new names that had been considered was Exotic Goblet.

This is all part of the banality of Hitler in India.  Consider the following two examples: 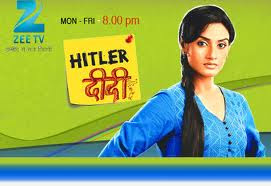 2011 – Present.  Here is a daily soap opera called Hitler Didi.  Why Hitler?  Because Auntie Hitler is strict.  Like the Hitler store guy’s grandfather.

Hitler Didi is all about the strict, tough and strong minded Indira Sharma (Rati Pandey)who is the “Hitler Didi” of Chandni chowk . She has the responsibility of her whole family, as she is the sole earner. Her life revolves around bills and the financial situation of their family. And due to the heavy burden of her family, her life has become dull and colorless and she has become a mere working machine without any emotions in her. Until one day when her new tenant Rishi Kumar (Sumit Vats) arrives, who lights up her life. He brings joy in her life, helps her at every step of life. He becomes the shoulder she can cry on, the one person she can trust the most. 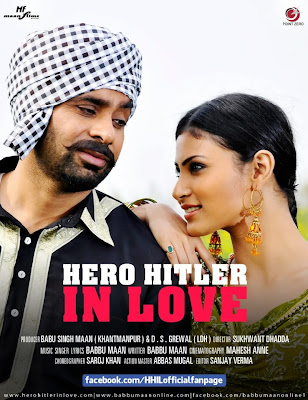 Hero Hitler in Love revolves around Hitler who lives in his village Ishqpura. Hitler is a man with unique and different thoughts who loves his fellow villagers and helps soul mates come together. Hitler falls in love with Sahiban, who lives in Pakistan and decides to bring her to his village. Hitler believes in solving problems by talking about them but when something crosses the line, he decides to become real “Adolf Hitler”.

So he decided to become “real” Adolf Hitler?  What does that mean?  He trims his mustache?  Practices his elocution?  Starts murdering Indian Jews?

The film also revolves around car racing. Hitler who loves to race, but when he is set up to fail in the Asian Car Racing competition he decides to take revenge. The story relates how Hitler takes his revenge and fights to win his girl and reunite the nations of India and Pakistan.

Much like Hitler “reuniting” Czechoslovakia, Austria and Poland with the Motherland, I suppose.  Except Adolf Hitler, as far as I know, didn’t race cars.

Clearly, there’s some vast cultural difference to explain all this.  These things would get you arrested in France and to be honest, I’m pretty sure you’d be denied your freedom of speech in the USA in these cases….can you imagine a Hitler Chicken in Williamsburg, Ybor City or the French Quarter?

It’s weird, I gotta admit.  The whole Engrish thing is more than just bad grammar, it’s also a misunderstanding of Western cultural norms.  And Westerners don’t get the East, either, it would appear.

I guess it could all be written off with a smirk, but in India, there is a nationalist element that admires Hitler, substituting Muslims for Jews.  The article I link to is a bit alarmist, dropping figures like 100,000 copies of Mein Kampf  sold over seven years as if it means fuck all in a country of 1 billion.

So, I don’t think these droplets in an ocean mean Indians have taken to anti-Semitism, it’s just one of those weird losses in translation that leaves us aghast and the Indians, for the most part….indifferent.