HEAVY ILLUMINATI SYMBOLISM IN AUSTRALIAN AD ” FOR THE LOVE OF MUSIC” 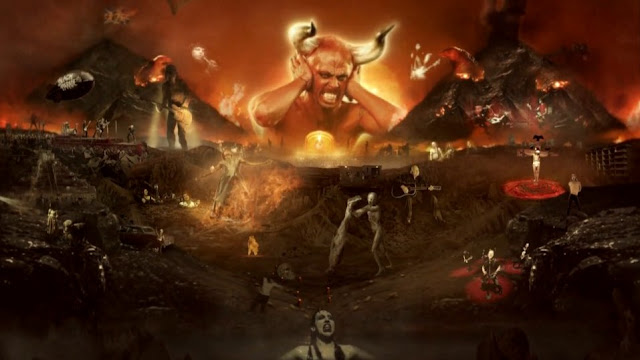 Please enlarge this very Talmudic image. Why do I call it Talmudic? Look closely and you will see the crucified Jesus in a rather unsavory circle in hell with the carrion crow overhead as opposed to the usual dove.
Here is the blurb accompanying the video on the producer’s page:
Channel [V]’s ‘For the Love of Music’ Campaign 2012
Where There’s Smoke recently delivered Channel [V]’s 2012 Channel Rebrand and Ident campaign. The iconic Australian music channel wanted to create something different. Something big. A homage to the artists that have made an impact on music.
Conceptualized in-house, and inspired by video-art from a NYC hotel elevator, the [V] creative team wanted to build a journey through a musical wonderland using video montage. WTS was tasked with making the impossible, possible. We obliged by building a series of surreal ‘realms’ to journey through.
Using Channel [V]’s best resource – music videos, the XYZnetworks Music Channel’s creative team and WTS searched through thousands of clips from hundreds of artists, determined to locate the perfect scenes, characters, and icons to build these mystical realms.
The ‘For the Love of Music’ spot features music’s biggest and best artists from Nirvana to Lady Gaga, with hundreds of artists featuring in the 1 minute, 45 second commercial.
Over 100 re-badged on-screen assets and broadcast elements were delivered. Re-branded, re-imagined.
Here is the video:
Lastly, here is VC’s breakdown of this extremely disturbing video.
By VC
June 18th, 2012
This ad named “For the Love of Music” plays frequently on the Australian TV station [V]. It is directed by Marco Brambilla, an artist that is very sought after by advertisers and record labels for his trademark “video tableaux”. In fact, he directed Kanye West’s very symbolic video Power   – see the article entitled Kanye West’s “Power”: The Occult Meaning of its Symbols). This ad however takes things to another level. It is full of symbols and messages representing the hidden forces that control the music industry.  See for yourself:
The ad begins literally in hell as the Devil is shown covering his ears due to the great number of musicians down there.

This tableau apparently represents rock & roll. Why is hell full of rockers? Did they sell their soul to the Devil? Among the most recognizable figures are Kurt Cobain and Johnny Cash. This last singer was a devout Christian so it is rather odd to have him play in hell. Also, why is there a crucifix surrounded by fire down there?

The lines created by the rock formation above the Devil (highlighted by white lines) form a triangular shape. At the apex of it, a single eye is creepily watching the viewers.

The tableau conceals a pyramidal shape (which I highlighted with white lines). At the base are dancers (or the masses) and at the top is an illuminated capstone and a solar eclipse acting as the eye in the pyramid. 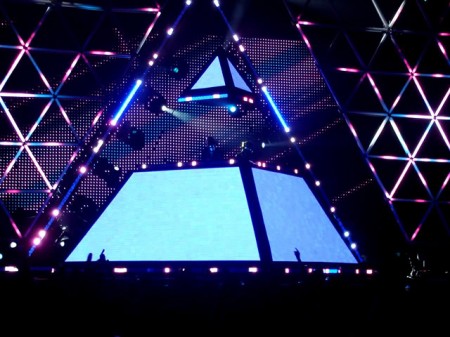 The triangle is a scene from Rihanna’s video Umbrella. 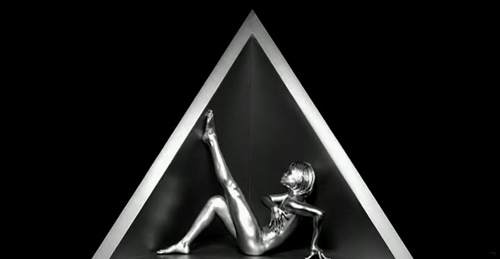 In esoteric symbolism, the upright triangle is a phallic symbol. Rihanna “trapped” inside this triangle represents her being controlled (possessed) by the hidden forces of the industry. This scene therefore fits right in this very symbolic ad.
Above Rihanna is a tableau representing hip-hop. The scene contains many occult symbols and is laid out in classic Masonic fashion.

Twin pillars, a checkerboard pattern floor and a staircase to “illumination” make  this tableau very Masonic. 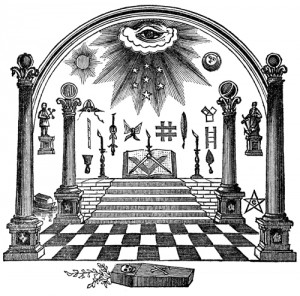 We find the same layout and symbols in this classic Masonic engravement.
Moving around on the stairs are 2Pac and Biggie, arguably (well, not arguably) the two most important figures of rap history. There is however a figure above them, at the top of the stairs: A huge Kanye West drenched in light. Does this represent Kanye West being “recruited” by the Illuminated while 2Pac and Biggie being stuck on in the staircase? Is this why they are both dead now? Is this why their murders were never resolved? Hmmmm.
Above this tableau is the “heavens”, filled with pop stars such as Lady Gaga, Michael Jackson and Britney Spears ~ all stars that were (or still are) heavily controlled by the industry.
In short, this ad manages to pack in a minute and 45 seconds an incredible amount of symbolism and hidden messages regarding the music industry and the shady secret society that controls it. If most viewers won’t recognize a single symbol in this ad, those who have “eyes to see” understand that it hides in plain sight some of the industry’s darkest secrets.