At issue is separate and less equal than before. It’s divide and conquer policy. Critics slammed the law. They did so justifiably.

It institutes what at first glance seems minor. It changes the number of public advisory council members appointed under the 1988 Equal Employment Opportunities Law. 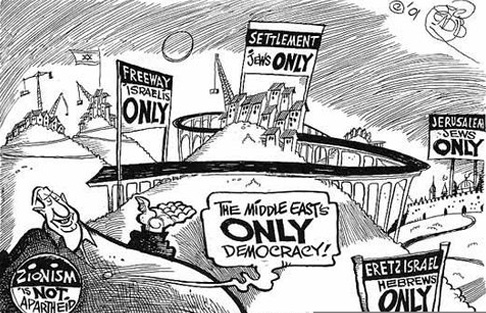 “This law aims to create a new reality among our people based on religion and not national identity.”

Hardline Likudnik sponsor Yariv Levin is unapologetically racist. “We and the Christians have a lot in common,” he said.

“They’re our natural allies, a counterweight to the Muslims who want to destroy the country from within.”

She does so “in the same way (she) wouldn’t be interested in separate representation for Lithuanian Haredim and (Sephardi) Haredim,” she said.

On February 24, Knesset Labor, Welfare and Health Committee chairman Haim Katz introduced the law in the plenum. He lied saying:

“The aim is to look after populations that have a hard time in the labor market and to give them a representation on the advisory committee.”

Israel’s Knesset is its most hardline in history. Racist fascist  dominate it. Opposition members are few.

They’re way outnumbered. They have no power. The few Arab MKs have no say whatever. They’re little more than potted plants.

She opposes racist legislation. “Perhaps we should also divide the Jewish population into Poles, Yemenites and Moroccans,” she said.

“We are essentially in a situation where an effort is being made to try to define the state according to religions.”

“Here they are trying to say that there’s a difference between Muslim Arabs and Christian Arabs.”

“There’s no specific Christian or Druze employment problem, only (one for) the general Arab population.”

“Levin is interested in cruelly dividing the Arab public, which is oppressed as is. We will not be his lackeys.”

“My legislation will provide separate representation and separate attention to the Christian public, separate from the Muslim Arabs.”

“This is a historic and important move that could help balance the State of Israel, and connect us and the Christians, and I’m being careful about not calling them Arabs because they aren’t Arabs.”

“The first law I will pass will give Christians representation on the advisory council of the Equal Employment Opportunity Commission.”

“We and the Christians have a lot in common.” He wants Jews allied with them against Muslims.

“On the other hand,” he said, “there’s a message here. We will use an iron hand and demonstrate zero tolerance of Arabs who are liable to identify with the terror of the Palestinian state.”

Nominally, the law aims to increase employment opportunities among Israeli minorities. Implementing it will do nothing of the sort.

Levin said similar bills will follow this one. They’ll benefit Christian Arabs at the expense of Muslim majority ones. They’ll harden Israeli racism more than already.

“I’m proud to be Christian,” he said. “We have a right to self-definition as well. We are entitled to recognition.”

“We are supporting this bill. It makes justice for Christian needs and solves discrimination against them with the Arab community that the state has falsely put them for 65 years.”

“Christians have their own historical identity and heritage with a destiny different from Arabs and Muslims.”

“If something happened to our beloved country Israel, we as Christians will have a harmful destiny, as we see now in Syria, with massacres, rape, church destruction, like what happened in Lebanon and Iraq before.”

“We deserve the right to self-representation and identity with legal Christian representatives that understand our needs, to stop discrimination.”

Over 160,000 Christians are Israeli citizens. Nearly 80% are Arabs. Others largely emigrated from former Soviet states. Most live in majority Muslim towns and villages.

Levin’s bill delivers another body blow. If he follows through with more racist legislation, Muslim citizens will experience greater hardships.

Racist laws pass for that purpose. They punish unwanted Arabs. They represent back door ethnic cleansing. They want Muslims discouraged enough to leave.

Levin’s “bill threatens to erode even further the concept of citizenship in Israel.” Its nominal purpose belies its real one.

Levin wants Christian Arabs benefitting at the expense of Muslim ones. According to Haaretz editors:

“The widespread support for the bill in the Knesset shows that crazy ideas like these aren’t the province of an extremist, borderline-loony MK.

“They’re part of the national consensus.” It reveals Israel’s true character. It does so more than ever.

It’s no fit place to live in. For Arabs, it’s dangerous. Palestinians are ruthlessly persecuted.

Doing so does “great injustice to members of both religions,” said Haaretz editors. “(A)s minorities, (they’re) not treated properly by the state.”

Defining citizenship by “religion, color or gender,” defiles it altogether. Doing so “pushes Israel into the ranks of the darkest states.”

What if racist MKs distinguished between good and bad Jews.

Haaretz editors urged Knesset members to reverse what no legitimate state should tolerate. Racist legislation “does not reflect love of one’s country,” they said.

It more than ever reveals Israel’s true face. With or without this legislation, its dark side is plain to see.