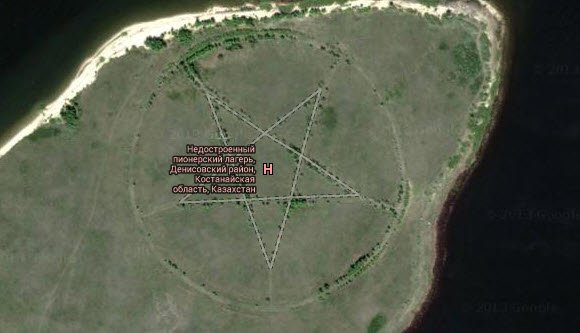 A gigantic inverted pentagram was found in Google Maps, in an isolated region of Kazakhstan, near the city of Lisakovsk. The circle’s circumference is over 1000 feet and contains a clearly defined, mathematically correct inverted pentagram. As reader of this site might know, the inverted pentacle is a classic symbol associated with black magic and is used by Anton Lavey’s Church of Satan. 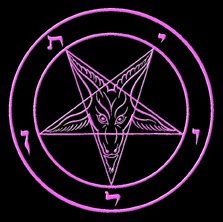 The logo of the Church of Satan – the Sigil of Baphomet – consists of an inverted pentacle with the goat of mendes.

When one would zoom into the pentagram in Google Maps, two strange locations would pop up, one named “Adam” and another “Lucifer”. However, since the story came out across the web, these locations disappeared and zooming into pentagram is now disabled.

This is what you get when you try to zoom into the pentagram.

Since yesterday, there is Russian text appearing on the pentagram – see the image above (I cannot translate that text, but if you can translate it, please post it in the comments and I’ll update this post).

Since this strange pattern was discovered, several mainstream news sources reported the story but immediately downplayed “conspiracy theories” surrounding it (because, apparently, properly identifying what is staring at your face now makes you a “conspiracy theorist”). Articles in the Daily Mail and Yahoo News state that it might be a missile launch site or a park. Many articles also strangely insist on the fact that this pentagram is “not evil” – some state that it is a “Christian symbol” while other claim that it is a “Russian symbol”. Maybe the upright pentagram is not a symbol that is inherently evil but the INVERTED pentagram, such as the one found in Kazakhstan is clearly associated with black magic and used in actual invocation rituals. Here’ what Manly P. Hall, a 33rd Degree Freemason and expert in occult symbolism wrote about the inverted pentagram.

“In symbolism, an inverted figure always signifies a perverted power. The average person does not even suspect the occult properties of emblematic pentacles. The black magician cannot use the symbols of white magic without bringing down upon himself the forces of white magic, which would be fatal to his schemes. He must therefore distort the hierograms so that they typify the occult fact that he himself is distorting the principles for which the symbols stand. Black magic is not a fundamental art; it is the misuse of an art. Therefore it has no symbols of its own. It merely takes the emblematic figures of white magic, and by inverting and reversing them signifies that it is left-handed. A good instance of this practice is found in the pentagram, or five-pointed star, made of five connected lines. This figure is the time-honored symbol of the magical arts, and signifies the five properties of the Great Magical Agent, the five senses of man, the five elements of nature, the five extremities of the human body. By means of the pentagram within his own soul, man not only may master and govern all creatures inferior to himself, but may demand consideration at the hands of those superior to himself.

The pentagram is used extensively in black magic, but when so used its form always differs in one of three ways: The star may be broken at one point by not permitting the converging lines to touch; it may be inverted by having one point down and two up; or it may be distorted by having the points of varying lengths. When used in black magic, the pentagram is called the “sign of the cloven hoof,” or the footprint of the Devil. The star with two points upward is also called the “Goat of Mendes,” because the inverted star is the same shape as a goat’s head. When the upright star turns and the upper point falls to the bottom, it signifies the fall of the Morning Star.”
– Manly P. Hall, The Secret Teachings of All Ages

Therefore, claiming that this inverted pentacle is associated with black magic and satanism is not a “conspiracy theory”, it is a known fact in occult symbolism. As stated by Hall, “the average person does not even suspect the occult properties of emblematic pentacles” and occultists believe that this symbol has true power. Why is it in this remote location in Kazakhstan? Was it put there by a satanic cult? Is it a military site? Can it be both?

This pentagram is not the only strange location in Kazakhstan. One of my first articles I’ve ever written was about Astana – a brand new city in Kazakhstan (read the article here). I describe how the entire city is was built on occult principles and that it might be a future center for a New World Order.

The post Gigantic Inverted Pentagram Found in Khazakstan – Can Be Seen on Google Maps appeared first on The Vigilant Citizen.