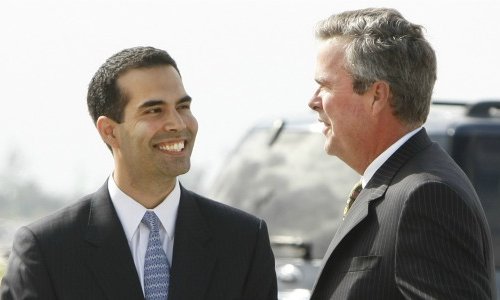 Presidential heir apparent George P. Bush, left, with his father, former Florida Gov. Jeb Bush, in 2008 (Associated Press)
George Prescott Garnica Bush (born April 24, 1976) is an attorney, U.S. Navy Reserve officer and real estate developer.He is the eldest son of former Florida GovernorJeb Bush, the nephew of former PresidentGeorge W. Bush, and the namesake grandson of former President George H. W. Bush. George Prescott is also named for his great-grandfather, Senator Prescott Bush.
By Molly Ball
The Atlantic
July 10, 2012
The fourth-generation heir to the Bush political dynasty,
groomed for office since his childhood,
is coming of age and building a political network.
His great-grandfather was a senator, his grandfather and uncle presidents, his father governor of Florida. Now a new George Bush is contemplating going into the family business.
George Prescott Garnica Bush, known to friends as “P,” is not just a chip off the old preppy block. The 36-year-old son of Jeb Bush and nephew of W. is Hispanic — his mother, Columba, is from Mexico — with brown skin, thick black hair, and a toothy, gleaming smile. He’s a lawyer, a Navy vet who served in Afghanistan and a political fundraiser who works to expand the Republican Party’s outreach to Latinos and young people.
Chatty without being overly polished, he lives in Fort Worth with his wife, whom he met in law school at the University of Texas, and runs half marathons in his spare time. It’s as if the ruling class kept pumping out new, less WASPy, more modern products to keep up with changing demand.
Bush has been touted as a political prospect practically since he was old enough to walk. At 12, he spoke at his grandfather’s first nominating convention; at 24, he recorded TV commercials for his uncle’s 2000 campaign. (“I have an uncle who is running for president because he believes in … opportunity for every American, for every Latino,” he said in the ad. “His name? The same as mine, George Bush.”)
. 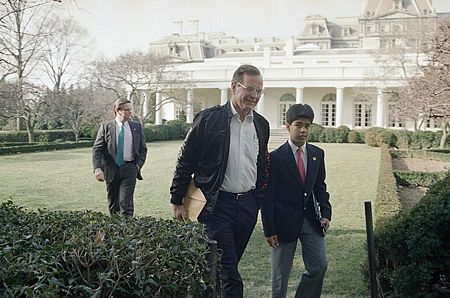 Of George H.W. Bush’s 17 grandchildren, he once boasted of being the favorite.

Now, Texas and Bush family observers wonder if his time is drawing nigh. As soon as 2014, they speculate, he could run for Congress or state office in Texas.
In Washington this week to tout a new partnership on young voter outreach, Bush proved adept at the political art of coyly encouraging such speculation. “I’m weighing that in my own mind,” he said of his political future. “I’m not specifically looking at anything right now, but yeah, I’d be open to it.”
He would, he said, want to do it on his own terms, not the strength of his famous name.
“My family has always said … if you’re going to get into politics, do it for the right reasons, not because you’ve got to carry on something,” he said. After graduating from Rice University, he noted, he “taught in an inner-city high school,” then became a lawyer, launched an investment company and joined the military. At this point, he said, he’s focused on his business, his marriage, and hopefully having kids.
. 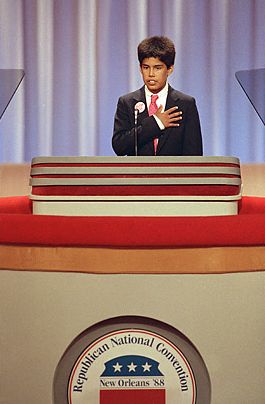 At the age of 12, George Prescott Bush appeared on the national stage at the 1988 Republican National convention, which nominated his grandfather. He led the Pledge of Allegiance at the opening session.

“So I don’t know,” he said modestly, having swiftly and skillfully recited his sterling political resume. “I’m drawn to public service. I love politics, but from the sidelines.”

“He has intellect, personality, good looks, business experience, military service, is bilingual and half Hispanic, and the family connections don’t hurt.”

For now, that is. Bush’s Maverick PAC recently transformed from a Texas to a federal committee, and on Tuesday it announced an initiative to work with the YG Action Fund ~ the super PAC extension of House Majority Leader Eric Cantor’s political operation. Together, they hope to bring young voters and donors into the GOP fold ~ a $5 million “effort to mobilize and elect the next generation of conservative leaders.”
He also has a Texas PAC that recruits Hispanic GOP candidatesand frequently speaks on the need for a more moderate GOP line on immigration. (The current Republican nominee, Mitt Romney, has been outflanked by President Obama on immigration, Bush said Tuesday, but still has “an opportunity to lead” if he will “be aggressive” on the issue, perhaps by embracing the proposals of Senator Marco Rubio.)
. 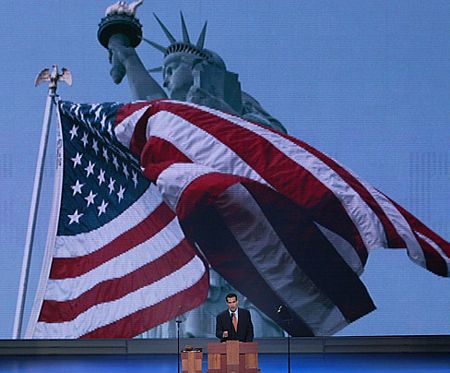 Add up these efforts and it’s clear that Bush is his family’s missionary to the next American generation, the embodiment and bid for relevance of the multigenerational political clan. He’s building a national network of up-and-coming Republican donors and, with his work to bring the party’s message Latinos, bridging its widening gap with the demographic that stands to be pivotal to its future electoral prospects.
“If George P. ever runs, you better believe he will be a Republican that carries the Hispanic vote,” says his friend Ana Navarro, a Republican consultant in Florida who is close to Jeb Bush. “He gets inclusiveness and the big-tent thing.”
Navarro calls Bush “the real deal and a complete package -~ has intellect, personality, good looks, business experience, military service, is bilingual and half Hispanic, and the family connections don’t hurt.”
. 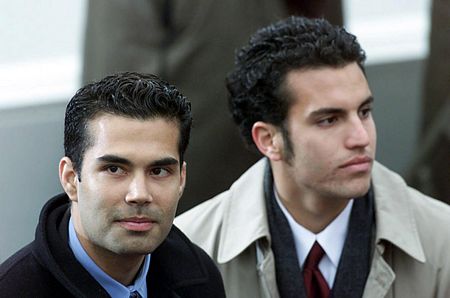 Having been an up-and-coming political scion practically his whole life, Bush seems to finally be on the brink of stepping into his destiny, and if this is bad news for opponents of dynastic politics, it is music to the ears of Bushworld.

“A lot of his dad’s friends would love to see him run for office,” Navarro said. “I hope he gets around to it soon, so we’re not all too old and tired to help on one of his campaigns.”
Bookmark the permalink.