On Halloween, Alex Jones conducted a Skype interview with Fritz Springmeier, who was released from prison in March. You can watch the full interview on Infowars, but here’s the first part:

I have written about Fritz Springmeier many times in passing. He has appeared at least once on this blog (“Al Gore and the Suitcase of Blood“), several times on Swallowing the Camel, and quite a few times on blogs dealing with “Satanic panic”.

It would be exhausting and rather pointless to detail his entire career here, but if you’re unfamiliar with Springmeier, here are some details you may want to know:

Kooky as he was, and annoying as his continuous stream of nonsense could be, I had no reason to suspect that Springmeier was in any way a violent man. So I was shocked in 2002, when Springmeier was indicted on charges of planting a bomb in an adult video store and robbing a bank in Damascus, Oregon, years earlier.

Here’s what happened: On the afternoon of October 8, 1997, a propane bomb exploded in the Fantasy Adult Video Store in Damascus. No one was injured.

Roughly ten minutes later and six miles away, a man in camo fatigues, later identified as Forrest Bateman, Sr., walked into the Damascus branch of Key Bank of Oregon and demanded cash from a teller, firing his assault rifle at the ceiling to intimidate bank employees and patrons into complying with his demands. He exited the bank with a mere $6000.

The bombing and robbery went unsolved until 2001, when police discovered the pot operation Springmeier, his wife, and some friends were running.
Springmeier and Bateman were arrested after deputies of the Clackamas County Sheriff’s Office seized fifty marijuana plants, bomb-making materials and illegal weapons**, and Army of God literature from Bateman’s home in Sandy, Oregon, in February. Anthony Huntington (Bateman’s housemate), Patricia Springmeier, and a woman named Jennifer Williams were also arrested. Bateman already had outstanding warrants against him for of assault and illegal possession of an assault rifle.
The FBI was brought into the case because of the weapons and Army of God literature, which indicated possible terrorist activities.

Anthony Huntington turned out to be the weakest link in the robbery chain. Faced with serious prison time for weapons and drug charges, he confessed his own role in planning the 1997 bombing and bank robbery, and gave up the names of his co-conspirators, including Springmeier and Bateman (most reports hint there was at least one other man involved, but no other co-conspirators are named). The drug and weapons charges were dropped and replaced with charges related to the bombing and robbery.

Batemen pled guilty and was sentenced to 9 years in prison. Springmeier pled not guilty, was convicted, and received the same sentence as Bateman. Huntington, for his testimony against Bateman and Springmeier, received a reduced sentence for his role in the bombing and robbery. He was released in 2005.
It should be noted that the longest prison term was served not by Springmeier, but by Bateman. Bateman was released from prison in September, a full seven months after Springmeier.

In my opinion, these three guys got off easy: Five and nine years are ridiculously short sentences for two violent crimes that could easily have resulted in fatalities. 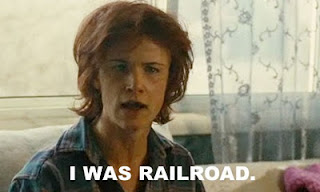 Now here’s where the “political prisoner” part comes into play. Springmeier claims total innocence in this affair. His story is that he knew Huntington only from Bible study. He knew nothing about the bombing, he knew nothing about the robbery, and the whole thing was a frame-up. He has even said he has an alibi: He was working at a print shop in Eagle Creek, a town ten miles from Damascus, exactly when the robbery occurred. But his boss refused to confirm this, he says, because Springmeier had once offended him by criticizing Billy Graham.

According to Fritz, he was framed for a variety of reasons: He helped people leave the Illuminati, he published his mind control research, he exposed an “entire community” of Illuminati members in Bend, Oregon (forcing them to sell their homes and move elsewhere).
He insists there was no evidence against him (both he and Jones betray a total lack of understanding of just what circumstantial evidence is, and how powerful it can be when used properly). He claims the three witnesses who testified against him at trial were bribed, though he presents no evidence of this. Not even circumstantial evidence.

Hard information about the case is scanty. Most of the original news articles have been taken down, and Internet searches just bring up the same small amount of info provided by Springmeier’s supporters (you’ll find dozens of re-posts of Henry Makow’s essay “How Fritz Springmeier Was Framed”, which will not tell you how Fritz Springmeier was framed; it’s simply more of Makow’s usual “the Illuminati did everything and that’s the end of it” b.s.).

It is not known to me precisely why Springmeier was growing pot, nor why he decided to take part in a bank robbery. The authorities seem to think he and his buddies were “fundraising” for even more sinister activities, such as bombing abortion clinics or federal buildings. It’s entirely possible, however, that Springmeier just wanted some cash.

In spite of his association with the racist Bateman, I have found no evidence that Springmeier is directly involved with organized racist or racial separatist groups. His wife maintains that he is not a racist.
He does have some peculiar ideas about Nazis and Jews, though. In Deeper Insights Into the Illuminati Formula, he and Wheeler contend that the Nazi concentration camps were established not because the Nazis wanted to confine and exterminate citizens they deemed non-Aryan, but simply to perform mind control experiments on children. The racial supremacy thing was just a “cover”. And he espouses conspiracy theories that Jewish people essentially control the world. In Bloodlines of the Illuminati, he and Wheeler wrote, “Since the core of the conspiracy of power is Jewish, the attitude of those allied with it hinges on their attitude toward the Jewish people.” They also stated that Oliver Cromwell was “financed by Jews, and helped the Jews gain power in England.”
It has been widely reported that Springmeier penned literature for the Christian Patriot Organization, an allegedly white supremacist group that operated an illegal warehouse bank in Oregon. I have found no evidence of this.

Is it possible that Springmeier was framed? Sure. Not likely, but certainly possible. Given the dearth of reliable, readily available info on the case, it’s difficult to discern exactly what happened here. To reach an opinion on the case, you have to rely heavily on hearsay and on Fritz’s word.

I choose not to believe Springmeier because he is not credible. He already had a criminal record (for parental abduction), and was engaged in drug-related activity, before the bank robbery charges were filed. He hung around with a skinhead bank robber, which is creepy any way you look at it. He believes – or wants us to believe – that fake Illuminati cowpeople walk among us, and that Auschwitz was more a science lab than a death camp. There’s just no reason to take his his word for anything. Springmeier is one odd, shady dude.

Alex Jones has a history of supporting incarcerated people who were definitely not persecuted, yet insist they were. Remember Ed and Elaine Brown, the elderly New Hampshire couple who decided that paying income tax is for fools, and were duly convicted (after an armed stand-off) of not paying their taxes? They cried foul from prison, and Alex Jones put them on the air to share their story with the world. What he did not share with the world were the couple’s various allegations that Freemasons, Zionists, Illuminati members, and Jesuits had framed them. That would have seemed silly to most of his listeners, because it’s fairly obvious that Freemasons and priests don’t give a flying crap about a couple of goofy senior citizens in rural New England who don’t feel like paying their taxes.

The same goes for Springmeier, of course. The Powers That Be aren’t particularly interested in persecuting small-town Oregonians who publish underground books full of weird mind control instructions, quirky religious beliefs, and warnings about synthetic cowpeople. If they did, Alex Jones wouldn’t have many guests left.

I know I’ll be getting a shitstorm of emails about this, along the lines of “You don’t know if Fritz is innocent or not!”. Yeah, well, Jones doesn’t know either. In the opening of the video, he makes it clear that he based his opinion of Springmeier’s sincerity on vibes: “I didn’t get any bad vibes from him, and I know that that’s always the real signal.” Somehow, I don’t think that would stand up in court.
Also, Jones has been selling Bloodlines of the Illuminati, and it would certainly not be to his benefit to admit that he’s been hawking the wares of a convicted bomber and bank robber, would it?

* H.P. Albarelli, Jr., spent nearly two decades researching the CIA and its mind control programs. He uncovered startling new evidence, but he found no evidence of Monarch, nor any comparable program. However, he did locate a man who admitted “the Monarch Project” was something he invented.
** According to one report: a machine gun, a grenade launcher, an assault rifle, a sawed-off shotgun, 3000 rounds of ammunition, ammonium nitrate, homemade C4 explosives, six homemade grenades, dynamite blasting caps, primers, fuses, black powder, and 200 timing devices, as well as a bizarre “suit of armor” made out of ceramic bearing an Army of God patch