THE FLIGHT FROM CONVERSATION 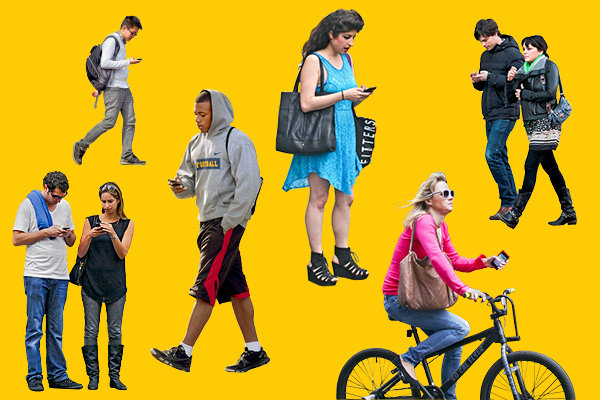 By Sherry Turkle
NY Times
April 21, 2012
We live in a technological universe in which we are always communicating. And yet we have sacrificed conversation for mere connection.
At home, families sit together, texting and reading e-mail. At work executives text during board meetings. We text (and shop and go on Facebook) during classes and when we’re on dates.

My students tell me about an important new skill: it involves maintaining eye contact with someone while you text someone else; it’s hard, but it can be done.

Over the past 15 years, I’ve studied technologies of mobile connection and talked to hundreds of people of all ages and circumstances about their plugged-in lives. I’ve learned that the little devices most of us carry around are so powerful that they change not only what we do, but also who we are.

We’ve become accustomed to a new way of being “alone together.”

Technology-enabled, we are able to be with one another, and also elsewhere, connected to wherever we want to be. We want to customize our lives. We want to move in and out of where we are because the thing we value most is control over where we focus our attention. We have gotten used to the idea of being in a tribe of one, loyal to our own party.
Our colleagues want to go to that board meeting but pay attention only to what interests them. To some this seems like a good idea, but we can end up hiding from one another, even as we are constantly connected to one another.

A businessman laments that he no longer has colleagues at work. He doesn’t stop by to talk; he doesn’t call. He says that he doesn’t want to interrupt them. He says they’re “too busy on their e-mail.” But then he pauses and corrects himself.
“I’m not telling the truth. I’m the one who doesn’t want to be interrupted. I think I should. But I’d rather just do things on my BlackBerry.”

A 16-year-old boy who relies on texting for almost everything says almost wistfully,

“Someday, someday, but certainly not now, I’d like to learn how to have a conversation.”

In today’s workplace, young people who have grown up fearing conversation show up on the job wearing earphones. Walking through a college library or the campus of a high-tech start-up, one sees the same thing: we are together, but each of us is in our own bubble, furiously connected to keyboards and tiny touch screens.
A senior partner at a Boston law firm describes a scene in his office. Young associates lay out their suite of technologies: laptops, iPods and multiple phones. And then they put their earphones on. “Big ones. Like pilots. They turn their desks into cockpits.” With the young lawyers in their cockpits, the office is quiet, a quiet that does not ask to be broken.
In the silence of connection, people are comforted by being in touch with a lot of people ~ carefully kept at bay. We can’t get enough of one another if we can use technology to keep one another at distances we can control: not too close, not too far, just right. I think of it as a Goldilocks effect.
Texting and e-mail and posting let us present the self we want to be. This means we can edit. And if we wish to, we can delete. Or retouch: the voice, the flesh, the face, the body. Not too much, not too little ~ just right.

We have learned the habit of cleaning them up with technology. And the move from conversation to connection is part of this. But it’s a process in which we shortchange ourselves. Worse, it seems that over time we stop caring, we forget that there is a difference. 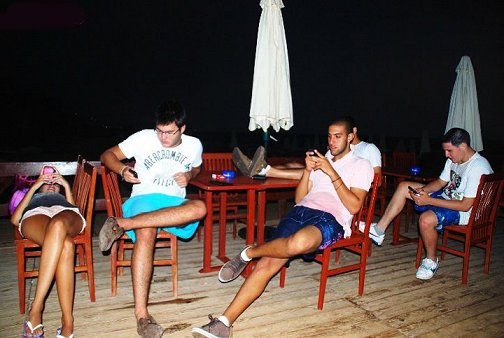 We are tempted to think that our little “sips” of online connection add up to a big gulp of real conversation. But they don’t. E-mail, Twitter, Facebook, all of these have their places ~ in politics, commerce, romance and friendship. But no matter how valuable, they do not substitute for conversation.
Connecting in sips may work for gathering discrete bits of information or for saying, “I am thinking about you.” Or even for saying, “I love you.” But connecting in sips doesn’t work as well when it comes to understanding and knowing one another. In conversation we tend to one another. (The word itself is kinetic; it’s derived from words that mean to move, together.) We can attend to tone and nuance. In conversation, we are called upon to see things from another’s point of view.
Face-to-face conversation unfolds slowly. It teaches patience. When we communicate on our digital devices, we learn different habits. As we ramp up the volume and velocity of online connections, we start to expect faster answers.
To get these, we ask one another simpler questions; we dumb down our communications, even on the most important matters. It is as though we have all put ourselves on cable news. Shakespeare might have said, “We are consum’d with that which we were nourish’d by.”
And we use conversation with others to learn to converse with ourselves. So our flight from conversation can mean diminished chances to learn skills of self-reflection. These days, social media continually asks us what’s “on our mind,” but we have little motivation to say something truly self-reflective. Self-reflection in conversation requires trust. It’s hard to do anything with 3,000 Facebook friends except connect.
As we get used to being shortchanged on conversation and to getting by with less, we seem almost willing to dispense with people altogether.
Serious people muse about the future of computer programs as psychiatrists.
A high school sophomore confides to me that he wishes he could talk to an artificial intelligence program instead of his dad about dating; he says the A.I. would have so much more in its database.
Indeed, many people tell me they hope that as Siri, the digital assistant on Apple’s iPhone, becomes more advanced, “she” will be more and more like a best friend ~ one who will listen when others won’t.
During the years I have spent researching people and their relationships with technology, I have often heard the sentiment
“No one is listening to me.”
I believe this feeling helps explain why it is so appealing to have a Facebook page or a Twitter feed ~ each provides so many automatic listeners. And it helps explain why ~ against all reason ~ so many of us are willing to talk to machines that seem to care about us. Researchers around the world are busy inventing sociable robots, designed to be companions to the elderly, to children, to all of us.
One of the most haunting experiences during my research came when I brought one of these robots, designed in the shape of a baby seal, to an elder-care facility, and an older woman began to talk to it about the loss of her child. The robot seemed to be looking into her eyes. It seemed to be following the conversation. The woman was comforted.
And so many people found this amazing. Like the sophomore who wants advice about dating from artificial intelligence and those who look forward to computer psychiatry, this enthusiasm speaks to how much

we have confused conversation with connection and collectively seem to have embraced a new kind of delusion that accepts the simulation of compassion as sufficient unto the day.

And why would we want to talk about love and loss with a machine that has no experience of the arc of human life?
Have we so lost confidence that we will be there for one another?
We expect more from technology and less from one another and seem increasingly drawn to technologies that provide the illusion of companionship without the demands of relationship.
Always-on/always-on-you devices provide three powerful fantasies: that we will always be heard; that we can put our attention wherever we want it to be; and that we never have to be alone. Indeed our new devices have turned being alone into a problem that can be solved.
When people are alone, even for a few moments, they fidget and reach for a device. Here connection works like a symptom, not a cure, and our constant, reflexive impulse to connect shapes a new way of being.
Think of it as “I share, therefore I am.”
We use technology to define ourselves by sharing our thoughts and feelings as we’re having them.
We used to think, “I have a feeling; I want to make a call.”
Now our impulse is, “I want to have a feeling; I need to send a text.”
So, in order to feel more, and to feel more like ourselves, we connect. But in our rush to connect, we flee from solitude, our ability to be separate and gather ourselves.

Lacking the capacity for solitude, we turn to other people but don’t experience them as they are.
It is as though we use them and need them as spare parts to support our increasingly fragile selves.

We think constant connection will make us feel less lonely. The opposite is true.
If we are unable to be alone, we are far more likely to be lonely.
If we don’t teach our children to be alone,
they will know only how to be lonely.
I am a partisan for conversation. To make room for it, I see some first, deliberate steps.
At home, we can create sacred spaces: the kitchen, the dining room.
We can make our cars “device-free zones.”
We can demonstrate the value of conversation to our children. And we can do the same thing at work. There we are so busy communicating that we often don’t have time to talk to one another about what really matters.
Employees asked for casual Fridays; perhaps managers should introduce conversational Thursdays.

Most of all, we need to remember ~ in between texts and e-mails and Facebook posts ~ to listen to one another, even to the boring bits, because it is often in unedited moments, moments in which we hesitate and stutter and go silent, that we reveal ourselves to one another.

I spend the summers at a cottage on Cape Cod, and for decades I walked the same dunes that Thoreau once walked.
Not too long ago, people walked with their heads up, looking at the water, the sky, the sand and at one another, talking.
Now they often walk with their heads down, typing.
Even when they are with friends, partners, children, everyone is on their own devices.
So I say, look up, look at one another, and let’s start the conversation.