Ferguson : Proof That America is Turning Into a Militarized Police State

Equipped with fatigues, assault weapons and armored vehicles, the police response in Ferguson, Missouri was proof that America is quickly becoming a militarized police state. 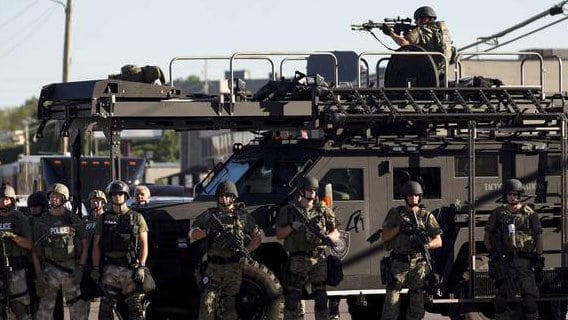 The shooting and killing of 18 year-old Michael Brown by a police officer sparked outrage in Ferguson, Missouri – a city that is predominantly Black but where the police force is overwhelmingly White. According to eye witnesses, the young man was shot about eight times, even though he was unarmed and had his hands in the air. Ferguson police officials stated that Brown was attempting to take a police officer’s weapon – a version of the story that was contradicted by various eye witness accounts.

The death of the young man at the hand of police caused protests which degenerated into looting and rioting. Far from attempting to calm the situation, local authorities turned Ferguson into an occupied war zone as police showcased its vast array of military equipment. Ferguson, an inner-suburb of the Midwest suddenly occupied by soldiers equipped with military fatigues, kevlar vests, helmets, tear gas and assault weapons, followed by armored vehicles topped by snipers. Some war veterans even noticed that “police officers” were better equipped than they were while serving in Iraq.

This kind of upsetting scene is becoming increasingly common in America as police forces across the country have been actively purchasing military equipment in the past few years.

Why armored vehicles in a Midwestern inner suburb? Why would cops wear camouflage gear against a terrain patterned by convenience stores and beauty parlors? Why are the authorities in Ferguson, Mo. so given to quasi-martial crowd control methods (such as bans on walking on the street) and, per the reporting of Riverfront Times, the firing of tear gas at people in their own yards? (“‘This my property!’ he shouted, prompting police to fire a tear gas canister directly at his face.”) Why would someone identifying himself as an 82nd Airborne Army veteran, observing the Ferguson police scene, comment that “We rolled lighter than that in an actual warzone”?

In 2013, Evan Bernick from the Heritage Foundation noted that

“The Department of Homeland Security has handed out anti-terrorism grants to cities and towns across the country, enabling them to buy armored vehicles, guns, armor, aircraft, and other equipment. Federal agencies of all stripes, as well as local police departments in towns with populations less than 14,000, come equipped with SWAT teams and heavy artillery.”

Ferguson police also a tactic that is seen in Gaza-like war zones when they actively targeted journalists and anyone filming policemen at work.

The arrests and tear-gassing of journalists in an American city is an outrage—in part because everyone is the media now. “Stop videotaping!” It’s about the first thing you hear in the handheld video Washington Post journalist Wesley Lowery took of his being arrested by police in Ferguson, Mo., Wednesday night, along with Ryan Reilly of the Huffington Post, for “trespassing”—in an open McDonald’s—while covering the unrest after the shooting death by police of Michael Brown. The two journalists were detained, roughed up and held in a cell before being released later the same night. (…)

Others in the streets were tear-gassed and hit by rubber bullets as police met the protesters, outfitted in SWAT gear and accompanied by snipers on armored vehicles. Nor were they they the only journalists targeted: here you can see footage of an Al Jazeera America crew fleeing their video equipment after getting hit with tear gas, after which a SWAT vehicle pulls up and police take down the camera and lights.

A SWAT team. To take out cameras. In the United States of America. Because you know how dangerous it is when people start pointing those things around.
– Time, “It’s Now Guns vs. Camera in Ferguson” 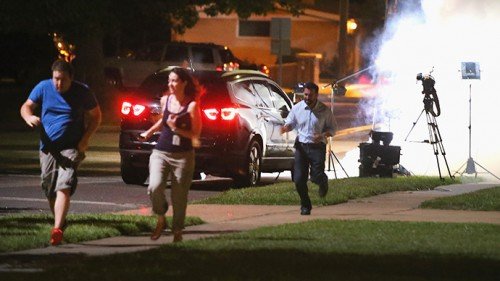 TV crew fleeing after receiving tear gas near its equipment.

After a few nights of confrontation, authorities switched strategies and replaced military-style  forces by state police. Almost immediately tensions evaporated and protests took a pacific turn, proving that a repressive and confrontational approach by police only exacerbates tensions and leads to more violence.

Events in Ferguson nevertheless prove that America is turning into a militarized police state and that it doesn’t take much to point military gear on American citizens.

The post Ferguson : Proof That America is Turning Into a Militarized Police State appeared first on The Vigilant Citizen.