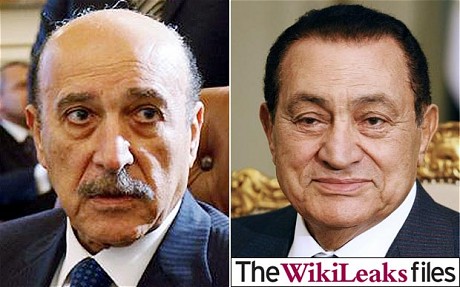 WikiLeaks: IsraHell’s secret hotline to the man tipped to replace Mubarak
Last week a friend called me from Cairo. He was, during the first fiveyears of our friendship, a happy young man working to get his medical degree,full of hopes for his future. Politics? He spurned them so our conversationsnever got too far in that direction. Now, degree completed, the laughter isgone from his voice. Work is almost impossible to find, money is becominguseless, there is no fuel, Egypt has, he says, fallen apart from the seams. Thepeople are still enslaved and it is getting worse. The revolution, he says, isvery very far from completion.
By Tim Ross, Christopher Hope,Steven Swinford and Adrian Blomfield
Shoah
April 8, 2012.
The new vice-president of Egypt, Omar Suleiman, is along-standing favourite of IsraHell’s who spoke daily to the Tel Avivgovernment via a secret “hotline” to Cairo, leaked documents disclose.
Omar Suleiman, left, was Israel’s preferred candidate to replacePresident Mubarak according to secret cables released to The Daily Telegraph byWikiLeaks
Mr Suleiman, who iswidely tipped to take over from Hosni Mubarak as president, was named as Israel’s preferredcandidate for the job after discussions with American officials in 2008.
As a key figure workingfor MiddleEast peace, he once suggested that Israeli troops would be“welcome” to invade Egypt tostop weapons being smuggled to Hamas terrorists in neighbouring Gaza.
The details, whichemerged in secretfiles obtained by WikiLeaks and passed to The Daily Telegraph, comeafter Mr Suleiman began talks with opposition groups on the future for Egypt’sgovernment.
On Saturday, Mr Suleimanwon the backing of Hillary Clinton, the US Secretary of State, to lead the“transition” to democracy after two weeks of demonstrations calling forPresident Mubarak to resign.
David Cameron, the PrimeMinister, spoke to Mr Suleiman yesterday and urged him to take “bold andcredible steps” to show the world that Egypt is embarking on an “irreversible,urgent and real” transition.
Leaked cables fromAmerican embassies in Cairo and Tel Aviv disclose the close co-operationbetween Mr Suleiman and the US and Israeli governments as well as diplomats’intense interest in likely successors to the aging President Mubarak, 83.
The documents highlightthe delicate position which the Egyptian government seeks to maintain in MiddleEast politics, as a leading Arab nation with a strong relationship with the USand Israel. By 2008, Mr Suleiman, who was head of the foreign intelligenceservice, had become Israel’s main point of contact in the Egyptian government.
David Hacham, a senioradviser from the Israeli Ministry of Defence, told the American embassy in TelAviv that a delegation led by Israel’s defence minister, Ehud Barak had beenimpressed by Mr Suleiman, whose name is spelled “Soliman” in some cables.
ED: The approval of Barak is a death knell for any hope for the Egyptian people. And Mrs. Clinton? Run from the man as fast as you can!
But Mr Hacham was“shocked” by President Mubarak’s “aged appearance and slurred speech”.
The cable, from August2008, said: “Hacham was full of praise for Soliman, however, and noted that a‘hot line’ set up between the MOD and Egyptian General Intelligence Service isnow in daily use.
“Hacham noted that theIsraelis believe Soliman is likely to serve as at least an interim President ifMubarak dies or is incapacitated.” The Tel Aviv diplomats added: “We defer toEmbassy Cairo for analysis of Egyptian succession scenarios, but there is noquestion that Israel is most comfortable with the prospect of Omar Soliman.”
Elsewhere the documentsdisclose that Mr Suleiman was stung by Israeli criticism of Egypt’s inabilityto stop arms smugglers transporting weapons to Palestinian militants in Gaza.At one point he suggested that Israel send troops into the Egyptian borderregion of Philadelphi to “stop the smuggling”.
“In their moments ofgreatest frustration, [Egyptian Defence Minister] Tantawi and Soliman each haveclaimed that the IDF [Israel Defence Forces] would be ‘welcome’ to re-invadePhiladelphi, if the IDF thought that would stop the smuggling,” the cable said.
The files suggest that MrSuleiman wanted Hamas “isolated”, and thought Gaza should “go hungry but notstarve”.
“We have a short time toreach peace,” he told US diplomats. “We need to wake up in the morning with nonews of terrorism, no explosions, and no news of more deaths.”
Yesterday, Hosni Mubarak’scontrol of Egypt’s state media, a vital lynchpin of his 30-year presidency,started to slip as the country’s largest-circulation newspaper declared itssupport for the uprising.
Hoping to sap themomentum from street protests demanding his overthrow, the president hasinstructed his deputy to launch potentially protracted negotiations withsecular and Islamist opposition parties. The talks continued for a second dayyesterday without yielding a significant breakthrough.
But Mr Mubarak was dealta significant setback as the state-controlled Al-Ahram, Egypt’ssecond oldest newspaper and one of the most famous publications in the MiddleEast, abandoned its long-standing slavish support for the regime.
In a front-page leadingarticle, the newspaper hailed the “nobility” of the “revolution” and demandedthe government embark on irreversible constitutional and legislative changes.