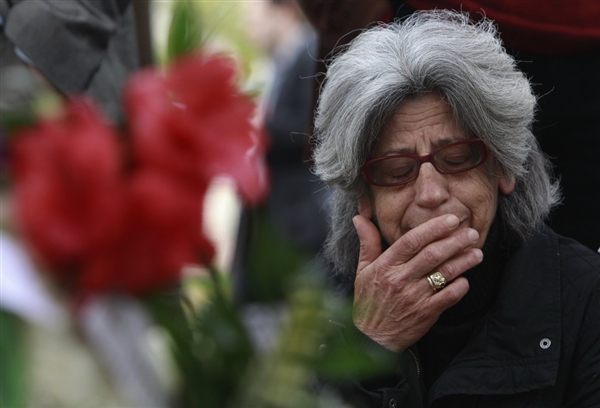 A mourner cries on Thursday at the spot where 77-year-old Dimitris Christoulas took his own life in Syntagma Square in Athens, Greece. Greek suicide levels have more than doubled within the past few months however this man took it very public. This is another shot that shall reverberate around the Globe.
It seems the suicides of hundreds of thousands of Indian farmers enslaved by Monsanto was not sufficient to draw attention to the remorseless crushing debts from the financial elite upon the ordinary people of every nation on the planet.
This Greek man may finally be the spark the world needs, to see just what the banking elite are up to.
Remember, these bankers took the world to this point of financial desperation almost immediately after taking over American banking via the creation of the Federal Reserve. They do not hesitate to eat everything in their path ~ including each other.
But for now,

Activist Post
April 5, 2012
Yesterday saw the obscene consequences of the corrupt financial and politicalelite’s insatiable greed, as a 77-year-old Greek man publicly committed suicide outsideParliament in Athens. The man, named locally as Dimitris Christoulas,reportedly pulled out a handgun and shot himself in the head during rush hour,having shouted “I’m leaving because I don’t want to pass on mydebts.”

A note found on Mr Christoulas’s body explicitly confirmed that his suicide wasa desperate response to the life of poverty he faced, due to EU- andIMF-imposed “austerity measures” that had caused his standard ofliving to plummet. 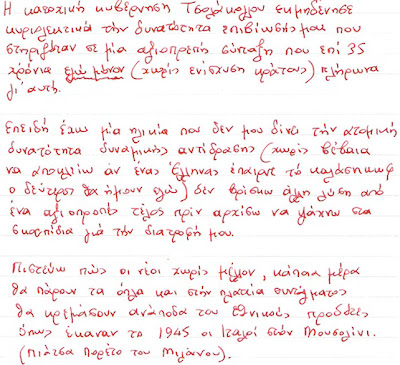 Here’sa translation of his note::
Following a career asa pharmacist he said that the Greek government had

“Thecollaborationist Tsolakoglou government has nullified any chance ofmy survival which was based on a decent salary that for 35 years I alone(without state support) paid for.

Since my advanced age does not allow me a way of a dynamicreaction (although if a fellow Greek was to grab a Kalashnikov, I would be thesecond after him), I see no other solution than this dignified end to my life,so I don’t find myself fishing through garbage cans for my sustenance.

I believe that young people with no future, will one day take uparms and hang the traitors of this country at Syntagma square, just like theItalians did to Mussolini in 1945 (Piazza Loreto in Milan).

MrChristoulas’s suicide is the most public expression of despair to date, by apopulation who are seeing their living standards drop massively due to cuts and”readjustments” demanded by international financiers.

Pensions and benefits have been cut by up to 25%, salaries and public servicesslashed, whilst taxes have been raised and unemployment is high, as the Greekpeople are made to suffer for debts incurred following years of complicitybetween corrupt officials and global loan sharks like the IMF.

Diseases including HIV and malaria have reportedly risen sharplyin Greece due to the collapse of the economy, and police data suggeststhe suicide rate has increased by 20% in the last two years.

In Italy, one of manycountries being similarly looted by the financial elite, there has also been awave of suicides, with a 59-year old reportedly killing himselfyesterday due to his business failing.

That we are seeing hardship and unrest in manycountries is unsurprising, considering that deprivation and “the IMFriot” are written into the very plans of the global financial elite.

In 2001 investigativereporter Greg Palast, using confidential documents and interviews with formerWorld Bank chief economist Joseph Stiglitz, revealed how institutions like theIMF and World Bank operate.
They have a fourpoint plan to enable them to take over the economies of sovereign nations.

This  involves the privatization of a nation’sindustries, with which corrupt politicians are often all too keenly complicit,due to the lucrative commissions on offer.

Thisis “capital market liberalization”, when speculative foreigninvestment capital flows into the country in real estate and currency, but canas rapidly be withdrawn at the first sign of trouble.

This leads, predictably, to Step-Three-and-a-Half: what Stiglitzcalls ‘the IMF riot’. The IMF riot is painfully predictable. When a nation is,’down and out, [the IMF] squeezes the last drop of blood out of them. They turnup the heat until, finally, the whole cauldron blows up,’
You’d almost believe the riot was expected. And it is. WhatStiglitz did not know is that Newsnight obtained several documents from insidethe World Bank. In one, last year’s Interim Country Assistance Strategy forEcuador, the Bank several times suggests ~ with cold accuracy ~ that the planscould be expected to spark ‘social unrest’.

Such riots cause a flight of capital and government bankruptcy,meaning the country’s remaining assets can be picked off at absurdly cheapprices by foreign investors; there are always “lots of losers but theclear winners seem to be the western banks and US Treasury”.

Stiglitz explained how the IMF’s restructural “assistance” resultedin Africa’s income dropping by 23%, with Botswana being the only country toavoid such a fate because they told the IMF “to go packing”. WhetherGreece and other massively indebted countries will do the same remains to beseen, though as Greek politicians are currently groveling for bailoutpackages from the EU and IMF (as if further debt could ever improve thecountry’s situation), the future for the working people and middle class ofGreece looks bleak.

The “IMF riot”: coming soon to a town near you.