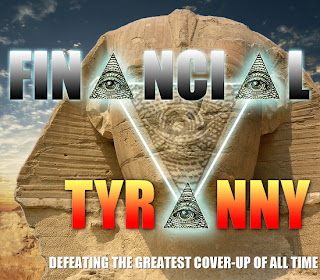 The following documentary is Part Two of the epic Russian series, based on David Wilcock’s groundbreaking “Financial Tyranny,” on how the Federal Reserve bankers secretly financed both sides of World War I and II.

It was the ultimate bank robbery — a sociopathic cabal of insiders who dreamed up, and carried through with, the greatest crime in human history.

They were stealing gold — which had been held in central banks as collateral to print currency for hundreds of years.

Some of the leaders secretly knew this was being done — and were told it was for the good of humanity, as gold ownership would devastate world peace.

The gold was secretly put “on deposit” with the Federal Reserve — and exchanged for worthless bonds, with face values of up to a billion dollars each.

This global heist allowed the Federal Reserve to eliminate all competition to their “magic printing press” — so they could print 26 trillion dollars’ worth of bailouts, as a Fed audit revealed.

Imagine if you could write numbers on a piece of paper and get real value for it in exchange. This was the greatest stunt of all — and the Cabal actually pulled it off, worldwide.

A growing international alliance of countries want to defeat the Federal Reserve — and restore unprecedented peace and prosperity to our planet.

This is the second of two episodes of “We Never Dreamed,” a popular show on REN-TV that airs on prime time. This episode was called “The Dark Magic of Gold,” and aired on January 30, 2013.

When the first episode aired on January 16, 2013, Germany demanded the Federal Reserve return 300 metric tons of gold “on deposit” that same day — and also demanded France return their entire holdings of 376 metric tons.

Russia bravely stepped forward to reveal the secrets of the Illuminati, Lucifer, the Bilderberg meetings, the New World Order, and the greatest criminal act in human history.