The response to the COVID-19 pandemic launched the largest human experiment in world history. At the moment of writing these lines, over a third of the global human population is forced into confinement. Furthermore, the global economy came to a screeching halt as several governments ordered the closing of all non-essential businesses. Never in world history have we seen such sweeping and far-reaching measures that affect each individual at such a profound level. In a matter of weeks, the ability of billions to move around freely and to earn a livelihood completely vanished.

While these measures are said to be temporary in order to strop the propagation of the virus, an important fact remains: They’ve actually become a reality. And this means that they can easily become a reality at any point and time in the future.

Although it is comforting to think that our governments have our health and best interests at heart, it is rather naive to believe that the most powerful people in the world do not see this pandemic as an amazing opportunity. One of the elite’s favorite sayings is “never let a good crisis go to waste”. And this crisis is definitely not going to waste. This pandemic has enabled the “testing” of various authoritarian measures that are exactly in line with the world elite’s long-term plans. In fact, it is difficult to imagine a better plan to simultaneously terrify, isolate, subdue, impoverish and demoralize a society as a whole – creating the perfect context to reshape to fit specific interests.

In short, the dystopian future is now. For years, this site has been warning about plans for a world government that is based on intense mass media indoctrination and high-tech police state surveillance. We are living all of this now – to a degree that many of us did not even fathom a few weeks ago.

If this global lockdown lasts a few weeks, the world might recover and regain some sort of normality (until the next crisis). However, if this goes on months (as some experts predict), the impact on society will take on biblical proportions.

Here’s a look at the many facets of this lockdown and their possible long-term impact on humanity as a whole. 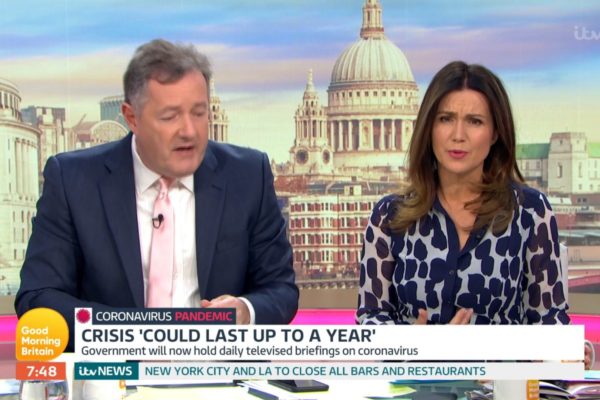 Mass media preparing the masses for a long crisis.

The first “symptom” of COVID-19 was the complete takeover of mass media on a global level. Nearly every media source – no matter its target audience or niche interest – switched to 24/7 COVID coverage. All other news topics became irrelevant and got evacuated from the public discourse. Nearly all forms of entertainment – most notably professional sports – were put on hold, forcing people to solely focus on the pandemic.

In newspapers, scoreboards displaying sports results were replaced with a morbid “deaths and confirmed cases” scoreboard that is custom-made to generate fear. Every day, billions of humans anxiously follow these “scores”, knowing that their freedom and livelihood depend solely on these government-issued numbers. If the numbers do not go down, the confinement goes on.

As COVID-19 took over mass media, popular culture as a whole instantly turned into a barren wasteland. There are no new cultural products and no artists releasing material that could ease minds, provide some entertainment or, perhaps, provide some much-needed insight. Most artists are reduced to social media “influencers” who repeat the Orwellian orders heard everywhere else around the world: “Stay home and wash your hands”.

In short, nearly all forms of social and cultural distractions were replaced with wall-to-wall COVID coverage. As people consume a steady stream of frightful news, levels of anxiety keep going up, creating an ideal context for the introduction of police-state measures. And these measures were welcomed with thundering applause. 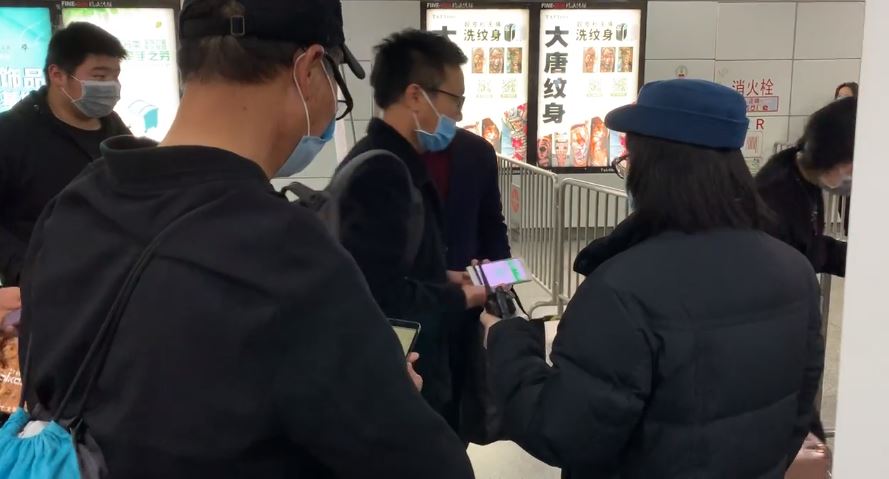 Chinese citizens must show a government-issued QR code on their phone in order to take public transportation.

The threat of a deadly pandemic is the perfect context to introduce aggressive police state tactics. People are scared and they want to see decisive measures taken by their government. However, once this is all said and done, will society recover 100% of its freedoms? Or will it gradually go back to about 50%, celebrating each percent as a victory?

The first casualty of the pandemic was air travel. Simply put, it just stopped. All flights were canceled and people abroad were told to go back home as soon as possible. Once everyone got home, everyone was told to remain home. Then, in a matter of days, governments went from banning “large gatherings” to banning gatherings of “2+ people”.

These unprecedented restrictions on human contact generated a climate of fear and paranoia as people began to alert authorities of illegal gathering. While these “snitches” would argue that “the faster the epidemic is eradicated, the faster we all return to normalcy”, precedents are being set. 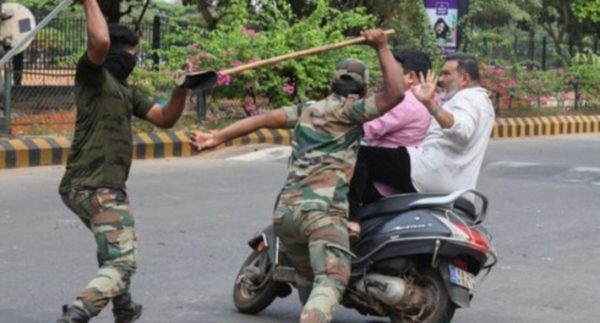 The pandemic has also justified the use of high tech surveillance at a level never seen before. Here are some examples from around the world:

In China, government-installed CCTV cameras point at the apartment door of those under a 14-day quarantine to ensure they don’t leave. Drones tell people to wear their masks. Digital barcodes on mobile apps highlight the health status of individuals.

In Singapore, the government rolled out an app called TraceTogether. It uses Bluetooth signals between cellphones to see if potential carriers of the coronavirus have been in close contact with other people.

Over in Hong Kong, some residents were made to wear a wristband which linked to a smartphone app and could alert authorities if a person left their place of quarantine.

In South Korea, the government used records such as credit card transactions, smartphone location data and CCTV video as well as conversations with people, to create a system where confirmed cases were tracked. The result was a map that could tell people whether they had gone near a coronavirus carrier.

On Thursday, the South Korean government launched an enhanced tool that it says can help track patients even more closely in near real time, in order to see where the disease was moving.

Meanwhile, Israel’s security agency Shin Bet is using citizens’ cell phone location data to track where they’ve been so they can enforce quarantine controls and monitor the movements of those infected. Controversially, the data has been collected over the past few years and intended to for counterterrorism purposes, the New York Times reported. The newspaper said this data trove and the collection of it had not been previously reported.

Some parts of India were stamping the hands of people arriving at airports telling them how long they had to be quarantined, Reuters reported. Reservation data from airlines and trains were being monitored to make sure those people didn’t travel, the report added. In the south Indian state of Kerala, authorities have been using a mixture of telephone call records, surveillance camera footage and phone location data to track down people who may have been in contact with coronavirus patients.

In the U.S., the government is talking to Facebook, Google and other tech companies about the possibility of using location and movement data from Americans’ smartphones to combat coronavirus.
– CNBC, Use of surveillance to fight coronavirus raises concerns about government power after pandemic ends

Albert Fox Cahn, the executive director of the Surveillance Technology Oversight Project believes that most of these measures are here to stay. He stated:

“We have absolutely no reason to believe that the government agencies that are eager to expand their power in response to COVID-19 will be willing to see those authorities lapse once the virus is eradicated.”

The after-pandemic will lead to another major source of concern: The economy. 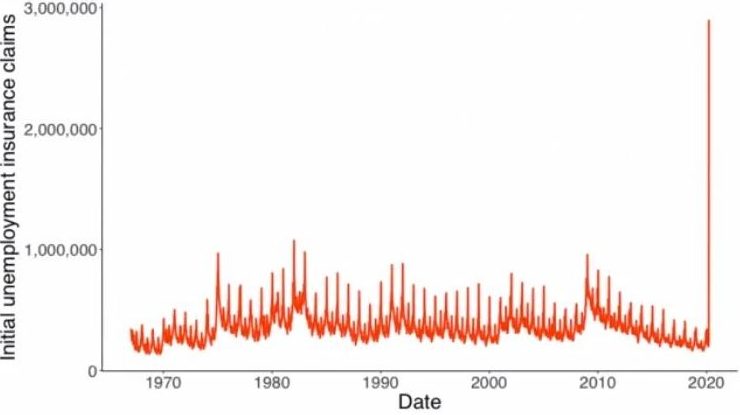 Initial unemployment insurance claims in the United States. From 2010 to 2020, a steady decline … until a sudden and historical peak.

COVID-19 incited several governments to enact a controversial measure: The closing of all non-essential businesses. This led to millions of workers to instantly losing their jobs. It also led to some unhealthy wheeling-and-dealings with governments to determine which businesses are deemed essential or not.

While most major corporations will weather the storm and hire back employees, a great number of small and medium businesses will not survive the shutdown.

The situation also creates clear winners: Major chains such as Walmart, Costco, Walgreens, McDonald’s and Amazon. In fact, due to a staggering jump in sales, Amazon recently announced the hiring over 100,000 employees to help cope with the demand. However, not unlike most jobs available at these major chains, the offered pay nears minimum wage.

If the lockdown persists, we can expect a major shift in the global economy: Small and medium businesses will struggle and die while gigantic entities will thrive as they turn into monolithic “distribution centers” for essential goods.

To prevent a complete crash of the global economy, governments announced trillions of dollars in financial aid to those impacted by the shutdown. However, this money does not come out of thin air: It will result in massive debts and, most likely, higher taxes. In poorer countries, financial aid is rare or non-existent – a recipe for impending chaos.

In the end, all economic crises always end up favoring the elite. The net result of the financial crash of 2008 (and its bailouts) led to the funneling of tens of trillions of dollars from the pockets of the middle class towards the world elite. This COVID crisis will most likely end with similar results.

While the above assessment might seem grim, it is an objective analysis of a planet in lockdown. In a matter of weeks, the entire planet went from normalcy to fear, panic, paranoia, confinement, unemployment, police-state surveillance and extreme social distancing. Millions of citizens who thrived on freedom and free enterprise are now on “house-arrest” and must rely on the government for subsistence.

Although the absolute necessity of these measures is up for debate, there is no possible debate their necessity once the virus is gone. And we need to make sure that the dystopian nightmare we are living now does not become permanent. Because, right now, some power-hungry people are salivating and they will only want more of this.

In these critical times, we must keep track of the many ways society is being altered and we must make sure that, once the virus is gone, liberty is fully restored. Because, as Thomas Jefferson said: “The price of freedom is eternal vigilance”.

P.S. If you appreciated this article, please consider showing your support through a small monthly donation on Patreon. If you prefer, you can also make a one-time donation here.