Comet Disaster Possible. Is Mars Doomed? And Earth Too?

A blast equivalent to 20-billion megatons of TNT or about 3.2 billion Hiroshima atomic bombs could hit Mars next year radically changing the Red Planet and send millions of bits of Mars hurling towards Earth.

C/2013 A1 (Siding Spring) is an Oort cloud comet discovered on 3 January 2013 by Robert H. McNaught at Siding Spring Observatory using a 0.5-meter (20 in) Schmidt telescope. Precovery images of the comet by the Catalina Sky Survey from 8 December 2012 were quickly found. At the time of discovery the comet was 7.2 AU from the Sun and located in the constellation Lepus.

There is a chance that the comet C/2013 A1 (Siding Spring)  might collide with Mars on October 19, 2014, says astronomer Leonid Elenin at Spaceobs. The Jet Propulsion Laboratory also calculates October 19, 2014 as the day the comet will pass closest to Mars.  Astronomers are still calculating and changing calculations as to how close the giant comet will come to Mars and a collision has not been ruled out yet. 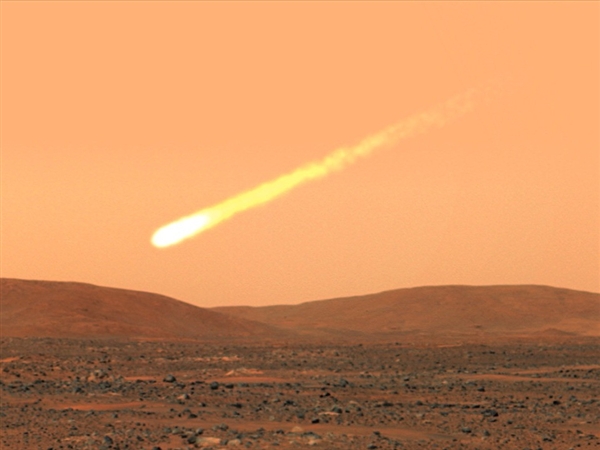 At the ISON-NM observatory, new astrometric measurements were received for this comet. Based on the existing measurements, more accurate orbital elements were calculated. The results of the second calculation for the close approach show that the comet might pass just 41,000 km (0.000276 a.u.) from the planet’s center, that is less than 37,000 km from its surface!

The snowball-like mass of ice and dust spent billions of years orbiting in the deep freeze of the Oort Cloud, a spherical cloud of comets surrounding our solar system. At some point, it got knocked out of this orbit and onto a course that brings it closer to the Sun but not before passing perilously close to Mars.  If it does not crash into Mars, it will pass through Earth’s orbit in 2015.

Since C/2013 A1 is a hyperbolic comet and moves in a retrograde orbit, its velocity with respect to the planet will be very high, approximately 56 km/s. With the current estimate of the absolute magnitude of the nucleus M2 = 10.3, which might indicate the diameter from 10 to 50 km, the energy of impact might reach the equivalent of staggering 2×10¹º (20 billion) megatons! This kind of event can leave a crater 500 km across and 2 km deep. Such an event would overshadow even the famous bombardment of Jupiter by the disintegrated comet Shoemaker–Levy 9 in July 1994, which by some estimates was originally 15 km in diameter.

Some believe a 20 billion megaton blast by a 50 kilometer wide would  create a crater over 1000 miles in diameter and throw out millions of rocks from inches across to hundreds of feet across into space with enough  velocity to escape Mars’ gravity and possibly some of these ‘Martian Asteroids’ could in turn strike Earth.  Scientists say that the 6 mile wide asteroid that hit Chixilub, Mexico 65,0000 years ago created a 180 mile crater and possibly wiped out the dinosaurs. The diameter of an impact crater would be roughly ten times the diameter of the comet’s nucleus.  Earth would be in the path of a huge Martian Asteroid swarm as it heads away from Mars in multiple directions and they would hit Earth 6 to 7 months after Mars is hit.

If Comet Siding Spring collides with Mars the light from the explosion would be visible to us on Eartht even during daylight, it would be as bright as a supernova.

See the Jet Propulsion Laboratory widget to calculate the orbit of C/2013 A1. These screen shots below are from the JPL Small-Body Database Browser showing the path and location of C/2013 A1. 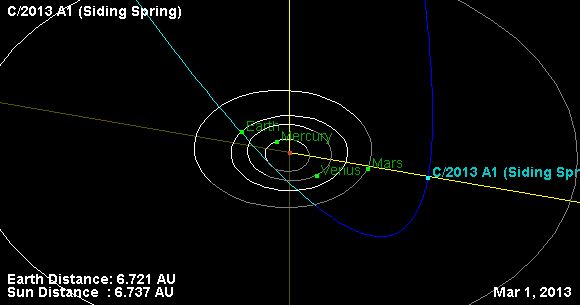 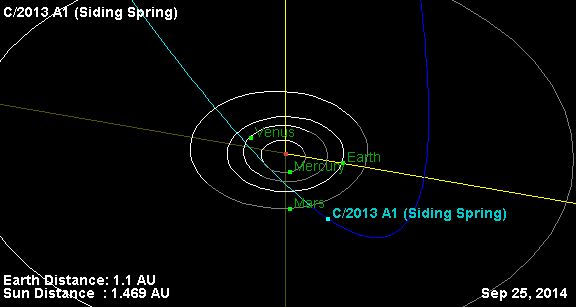 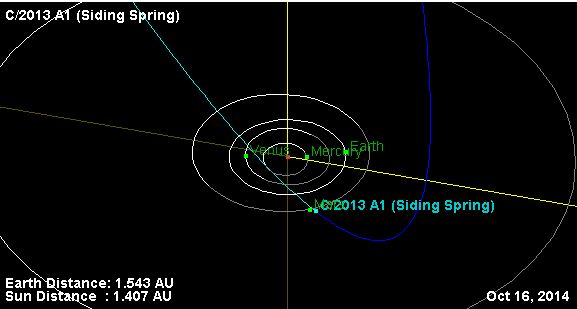 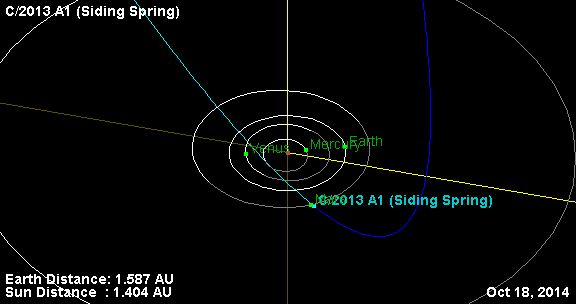 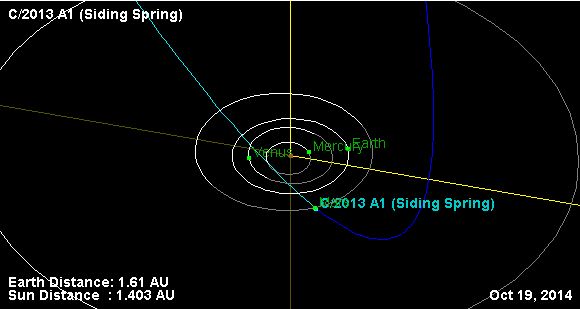 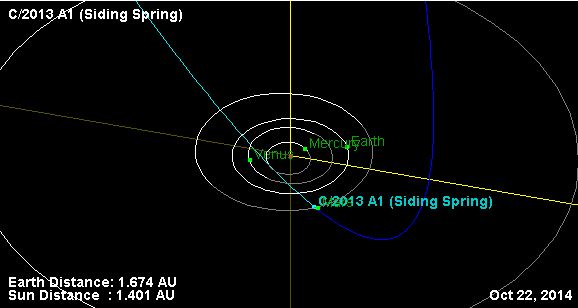 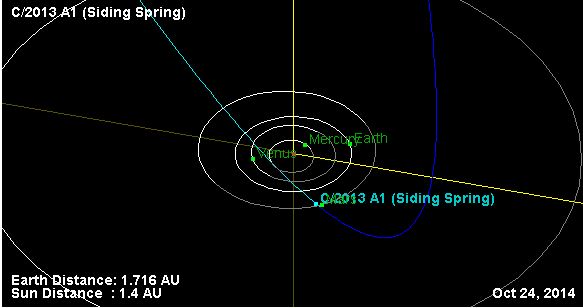 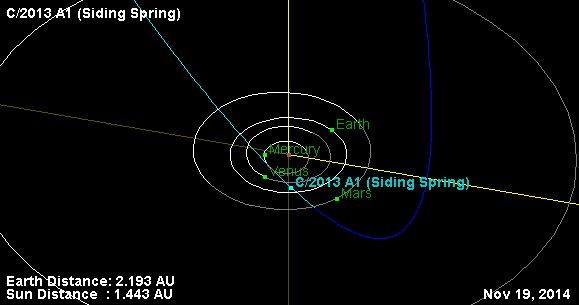 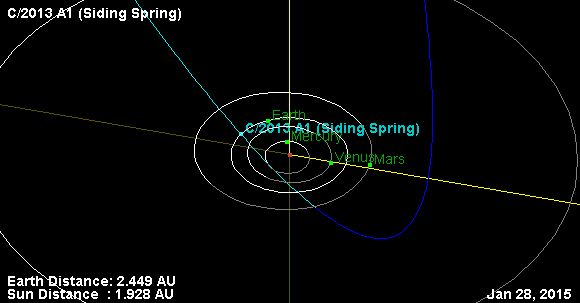 A collision with C/2013 A1 could result in a radical transformation of Mars, said Robert Matson, an aerospace engineer and meteor expert who worked with members of the Finnish Fireball Working Group of the Ursa Astronomical Association, according to the UniverseToday.com space news website.

The impact could raise enough dust and release enough frozen carbon dioxide to radically change Mars’ atmosphere, Matson said in emailed comments on February 28. The blow could either enhance the greenhouse effect, resulting in a thicker atmosphere, or cause surface temperature on Mars to plummet because the dust would obscure the Sun, Matson said. The comet could also trigger volcanic activity at the impact site, according to Matson.

Even if C/2013 A1 misses Mars, the planet will certainly pass through its coma, or gaseous envelope, which is 100,000 kilometers (62,000 miles) in diameter, Elenin wrote on ISON-NM’s website. A NASA probe, MAVEN, is scheduled for launch into Mars’ orbit in September 2014. This will enable NASA to closely monitor the comet’s trajectory.

Elenin says, “considering the size of the coma, which should exceed 100,000 km near the perihelion of its orbit, it can be said with 100% certainty that the planet will pass through the gaseous envelope of the comet C/2013 A1. Having a very tenuous atmosphere, the surface of the red planet will be subject to intensive bombardments by microparticles which, among other things, might cause malfunction of the space probes currently there.”

Observations continue, and will be stopped only in late spring due to small elongation of the comet. In the second half of summer observations will be resumed and we will continue to specify the parametres of the close approach of the comet C/2013 A1 (Siding Spring) and Mars.- See more at: http://spaceobs.org/en/tag/c2013-a1-siding-spring/#sthash.d9cT6zNV.dpuf

Large Shocked Field On Earth From Asteroid Or Comet

To give more perspective on the possible damage to Mars, research from The Australian National University (ANU) has identified one of the most extensive asteroid impact zones on Earth. The discovery came prior to the passing of a 45-meter-wide asteroid very close to Earth on February 15.

Located in northeast South Australia, the East Warburton Basin contains evidence of a 30,000-square kilometer shock-metamorphosed terrain thought to have been caused by an asteroid measuring 10 to 20 kilometers in diameter that hit Earth more than 298 million years ago. The blast is thought to havecaused a mass extinction at the time.

East Warburton Basin, Simpson Desert, South Australia, Australia August 1991: A small part of the massive interior drainage pattern that prevails throughout most of the central part of the Australian continent can be seen in this synoptic view of northeast South Australia. The general drainage through this section of the Simpson Desert is from the northeast to the southwest. Drainage in this picture can be traced from the Diamantina River which is the dark line slightly left of the top center of the image. The river enters the Goyder Lagoon (the broad, elongated dark area, upper middle).

Dr Andrew Glikson, a visiting fellow in the ANU Planetary Science Institute and the ANU School of Archaeology and Anthropology, studied the impact of the ancient asteroid following an initial suggestion by Dr Tonguc Uysal of the University of Queensland.
“The size of the shock metamorphic terrain, larger than 200 kilometres in diameter, makes it the third-largest discovered to date on Earth,” Dr Glikson said.
Year Of The Comet
While we are waiting on Comet Siding Spring, Comet PanStarrs will be visible later this month, in what scientists are calling the Year of the Comet.

Currently sweeping through southern skies, Comet Lemmon (C/2012 F6) was named for its discovery last year as part of the Mount Lemmon (Arizona) Survey. Brighter than expected but still just below naked-eye visibility, Comet Lemmon sports a stunning lime green coma and faint divided tail in this telescopic image from February 4. The greenish tint comes from the coma’s diatomic C2 gas fluorescing in sunlight. Captured from an observatory near Sydney, Australia, the color composite is constructed from a series of individual exposures registered on the comet. Across the 1 degree wide field of view, the star trails are a consequence of the comet’s relatively rapid motion against the background of stars near the South Celestial Pole. Moving north, the comet should grow brighter, reaching a peak (3rd magnitude or so) when it is closest to the Sun in late March. By early April it should be visible from the northern hemisphere. Of course, this year Comet Lemmon may be just another pretty comet as skygazers on planet Earth also eagerly anticipate views of Comet PANSTARRS and Comet ISON. Comet Of The Century Comet ISON

Out near the orbit of Jupiter, a faint speck of light is moving through the black of space. At first glance it doesn’t look like much, no brighter than a thousand distant stars speckling the velvet sky behind it; indeed, it takes a big telescope make out that it is a comet.

But what a comet it could turn out to be….

Later this year, “Comet ISON” could blossom into a striking naked eye object visible even in broad daylight.

ISON is a sungrazer,” explains Karl Battams of the Naval Research Lab. “The orbit of the comet will bring it very close to the sun, which we know can be a spectacular thing.”

This series of images of comet C/2012 S1 (ISON) was taken by the Medium-Resolution Imager of NASA’s Deep Impact spacecraft over a 36-hour period on Jan. 17 and 18, 2013. At the time, the spacecraft was 493 million miles (793 million kilometers) from the comet.

Russian astronomers Vitali Nevski and Artyom Novichonok found the comet in Sept. 2012. It bears the name of their night-sky survey program, the International Scientific Optical Network.

As 2013 unfolds, the comet is still very far away—near the orbit of Jupiter. That’s why it looks like a speck. “But for an object at such extreme distance, it is actually very bright,” says Battams. The comet’s glow suggests that is spewing gas and dust from a fairly large nucleus—“in the 1 to 10 km range,” estimates Matthew Knight of the Lowell Observatory.

On Nov. 28, 2013, this “dirty snowball” will fly through the sun’s atmosphere little more than a million km from the stellar surface. If the comet survives–a big IF–it could emerge glowing as brightly as the Moon, briefly visible near the sun in broad daylight. The comet’s dusty tail stretching into the night sky could create a worldwide sensation.

Some reporters have started calling ISON the “Comet of the Century,” but Don Yeomans of NASA Near-Earth Object Program thinks that’s premature.

“I’m old enough to remember the last ‘Comet of the Century’,” he says. In 1973, a distant comet named Kohoutek looked like it would put on a great show, much like ISON. The actual apparition was such a let-down that Johnny Carson made jokes about it on the Tonight Show. “It fizzled,” says Yeomans. “Comets are notoriously unpredictable.”

One hazard is the sun. Tidal forces and solar radiation have been known to destroy comets. A recent example is Comet Elenin, which broke apart and dissipated in 2011 as it approached the sun. Elenin, however, was a much smaller comet.

A better comparison, perhaps, is Comet Lovejoy, which flew through the sun’s atmosphere in 2011. Lovejoy emerged intact and wowed observers with a garish tail for weeks.

“Comet ISON is probably at least twice as big as Comet Lovejoy and will pass a bit farther from the sun’s surface” notes Knight. “This would seem to favor Comet ISON surviving and ultimately putting on a good show.

One of the most exciting possibilities would be a partial break-up. “If Comet ISON splits, it might appear as a ‘string of pearls’ when viewed through a telescope,” speculates Battams. “It might even resemble the famous Comet Shoemaker-Levy 9 that hit Jupiter in 1994.”

A break-up would pose no threat to Earth, assures Yeomans. “Comet ISON is not on a collision course. If it breaks up, the fragments would continue along the same safe trajectory as the original comet.”

Whatever happens, northern sky watchers will get a good view. For months after it swings by the sun, Comet ISON will be well placed for observers in the northern hemisphere. It will pass almost directly over the North Pole, making it a circumpolar object visible all night long.