Collaboration With A Dead Man

By Daurade | December 13, 2013 - 9:16 pm |December 18, 2013 Uncategorized
This is an excerpt from Collaboration With A Dead Man by LoS pal Tim Wilson.  Unfortunately, the process of squeezing the file into the you tube led to a one-second de-synchronization of the sound and image.  I hope to get Tim to describe the transfiguration of the file (Done, see below).  I know it was shot on 16mm, then videotaped from the screen of a flatbed editor, probably a Steenbeck, in the editing suite of the now-defunct USF film program.  Where it went before finally becoming a YouTube flash dealy would be an interesting insight into the digital fate of older analog media….
addeed 12/17
Daurade:  Can you describe the various transfer processes and the various formats this went through before you uploaded it to YouTube? I think that would be an interesting detail to add to the post. As I recall, some other video you’ve done went through almost 10 formats….16, VHS and then….?
Wilson:  Oh yeah, that was kind of a crucial element; I think now it was intended anyway to be something like the spate of “found footage” horror films, the story extracted, assembled from a cache of media, etc.
But lessee, reality went into the camera holes, exposing Super-8 Ektachrome, Super-8 TRI-X and 16mm B/W Reversal Film. The color Family Vacation shots are true found footage, color 16mm. The whole of it was developed and rephotographed thru an Optical Printer onto 16mm Reversal, the results of which were in turn developed and run again thru the Optical Printer, etc. Some shots have been treated this way up to four times. At the time, this process of reshooting footage was almost the content of the film in many ways; the structure resulting from zooming into shots, reframing scenes, stop-motion frame by frame control of speed, exposure, pans to following hairs and spots on the film rather than the focused action, etc. So each round of Optical Printing had the strange effect of both making the original more broad, stark — more diffused perhaps? — but also it revealed hidden figures, complex motions, emergent scenes composed of increasingly globular film grain. This cinema/motion film material was bolstered by material culled from the paper ephemera of Jorge Suarez’s life. Squares were cut from magazines, letters, etc, and packed into slides. Photographed through the OP as a kind of hurdy-gurdy animation, the printed matter illuminated such that it featured the front facing elements juxtaposed with the material on the backward, flip-side. The footage arising from this process was then developed and cut into the earlier material on a flatbed film-editor. I also spent considerable time at this stage cutting raw audio mag-tape, which comprises the entirety of the soundtrack. This length of hot-glue edited film, along with the diagonal tape edits of audiotape, was transferred to 3/4 inch Video for final editing. Later, this video was transferred to standard VHS, which was in turn digitized as a compressed DVD mpeg which spit out and split it all into disconnected chapters for some reason. These DVD chapters were strung together in AfterEffects and rendered as a lossless avi. Lastly, this avi was crunched down by Adobe Media Encoder into several web-friendly formats, one of which was stuffed thru a tiny, rough-hewn hole for YouTube display. 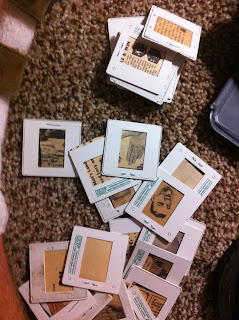 These are some of the slided from the Jorge Suarez material mentioned by Tim:

Photographed through the OP [optical printer] as a kind of hurdy-gurdy animation, the printed matter illuminated such that it featured the front facing elements juxtaposed with the material on the backward, flip-side.

Obviously, now one would just scan a magazine and pop the resultant .jpeg into After Effects, but back in the day, one had to physically photograph the image, the length of time on screen determined by how many times you shot it.  Remember at 24 fps, if you wanted say, a four-second appearance, you’d have to re-shoot the image 96 times!  The OP was tedious work and Tim was making the most extensive use of it in the film program, as far as I know.

Digital film-making can produce marvellous results….Inland Empire was filmed on a camera one can buy used for somewhere around 1000 euros.  Digital is faster and cheaper, allowing for many more experiments and takes; it makes film-making more accessible to the general public.  Most film stalwarts (as Tim was) have embraced it.  But most of them will probably tell you that they’re glad to have worked with film.  The physicality of it, the mechanical and chemical processes involved, the strange contraptions and devices one had to avail oneself of….there’s something undeniably rewarding working with tangible objects.  Although film-makers and artists have embraced digital formats, I think there will remain a tiny niche for working with actual film….as long as someone keeps making the stuff.

The second photo in the Wikipedia article on the optical printer shows a JK 16mm OP setup with a Bolex H16, which is very much if not exactly the same setup we had at USF.