SIGN OF THE DEVIL’S CLAW BY MEN OF THE CRAFT 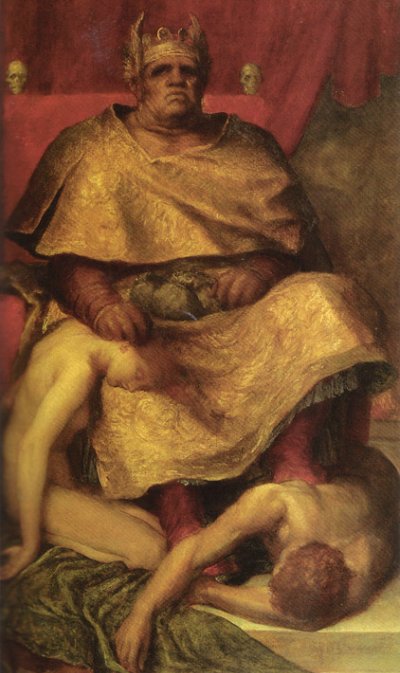 While the word “craft” can properly be used to describe an art, science, skill, or process practiced by a profession or occupation, in the occult world, the word takes on a much darker significance and is often called, the “Craft.” It refers to a devious process practiced by like-minded fellows who are bent on, and have agreed to follow, the ritualized path prescribed to effect the magic of the Great Work of alchemical transformation.

The Fellow Craft degree (2°) of Freemasonry is found in both the largest bodies, the York Rite and the Scottish Rite. According to Coil’s Masonic Encyclopedia, the Order of the Illuminati, formally founded by Adam Weishaupt and Baron Von Knigge in 1776, divided its rites into three principal classes and the second of the second class of rites was the Fellow Craft, 2°.1

Reinforcing the authoritative Coil’s Masonic Encyclopedia is the work of other Masonic and occult researchers who report that the Fellow Craft degree was awarded in the 2° of the Order of the Illuminati. In the book, Witchcraft, Magic, and The Supernatural, published in Great Britain, we find information about Sir Francis Dashwood, leader of Britain’s 18th century “Hell Fire Club.”

It is said that Dashwood, a notorious yet rich Rosicrucian magician, greatly influenced America’s visiting Benjamin Franklin, who frequently sought him out for occultic advice and information. Indeed, some believe that Dashwood was as important to the Illuminist cause on the isle of Great Britain as Adam Weishaupt was on the European continent.2 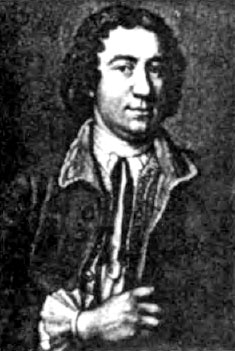 Sir Francis Dashwood, leader of England’s 18th century “Hell Fire Club,” practiced the dark side of magic. The nobility and rich frequented his group and called on him for rituals and advice. (From: Witchcraft, Magic and the Supernatural, London: Octopus Books, 1974, p. 33).
The Cunning vs. Those of Lesser Wit
The late Sovereign Grand Commander (Scottish Rite), Dr. Albert Mackey, 33°, in his classic encyclopedia reference book, says that the Fellow Craft degree implies “mutual trust” among the “brethren” of the Order. But he notes it is in a lower degree. The Masons, in the Middle Ages, he writes, were divided into two classes, Masters and Fellows:
Those who were of greater skill held a higher position and were designated as Masters while the masses of the Fraternity, the commonality, as we might say, were called Fellows. 3

Put another way, Mackey says that those possessing more “cunning” were graded as Masters, while the Fellows were of “lesser wit.”4

But of course, today, most all Masons begin by being initiated into the First Degree (Entered Apprentice). Then, the new Member is said to be passed into the Second Degree (Fellow Craft), and next is raised in the Third Degree (Master Mason). These are the three degrees of what is called the Blue Lodge of Freemasonry.

Why Is It Employed By High level Illuminists?
In this chapter we will reveal a number of high-rank llluminists giving the Sign of Fellow Craft (2°) Mason. Now since this degree is of lower status, this begs the question of why such famous, publicly acclaimed men as evangelists Billy Graham and Pat Robertson, as well as occult leader Annie Besant, Russian President Boris Yeltsin, and international financier Sir James Rothschild are all displaying the Fellow Craft sign. The answer is a fascinating one.
Mackey writes that the degree ~ and thus its primary sign ~ denotes a “fellow workman,” a commoner. In other words, it represents the masses of common people. It represents, adds Mackey, the “Stage of manhood” and the maturation of humanity by progression of man’s “reasoning faculties and…intellectual powers.”5
In essence, the Fellow Craft degree represents man progressively brought to a high status of possessing the supreme wisdom of the serpent. Man as a whole becomes God through reason. Therefore, the promise of the serpent made to Adam and Eve is realized: “Ye shall be as Gods.”
Wisdom of the Serpent
Those who display this sign, the Sign of the Fellow Craft, to their fellows in the Craft (the Illuminist, magical cult) are those chosen and ambitious of instructing the masses on the wisdom of the serpent. Since religious, or spiritual wisdom, is deemed essential and of a high order in Satan’s kingdom, it is only natural that his human representatives on earth who are leaders in the religious field show this sign of recognition.

Besant, a Theosophist, also displays the sign as her cult organization is based on serpentine occult wisdom, the perennial philosophy. Yeltsin was acclaimed by the press as popular leader of the Russian peoples’ revolution, and Rothschild desires to rule on the throne over all humanity as head of the Illuminati’s Inner Circle.

Also pictured here, in the pages that follow, giving the sign: Jesse and Frank James, outlaws celebrated as “Robin Hoods” who, it is claimed, showered some of their stolen wealth on the poor; Anton LaVey, who founded the Church of Satanin 1966 proclaiming it a Temple of Reason for those of wisdom and who sought mass membership as patronage; Socialist Eugene Debs, who claimed to represent the common man; and John Wilkes Booth, alleged assassin of President Abraham Lincoln. Booth was a Freemason and as such, was a fomenter of international revolutions of the people; Lincoln was not a Mason and sought to quell insurrection of the masses.

The Sign of a Fellow Craft Masonis made by raising the right hand to the left breast, with the palm towards the breast and the fingers crooked. Then, draw the hand smartly across the breast from left to right and let it drop to the side.

In performing the sign, the individual is taking his right hand, making a type of beastly devil’s claw out of it and then raking it across the breast from left to right. C. F. McQuaig, in The Masonic Report, calls this the Penal sign.

It is made to remind the person giving it of his oath taken, that if he discloses the secrets of the Order or gives aid and comfort to its enemies, he should have the right breast torn open and the heart torn out. In sum, this is a ghastly sign warning of death to he who dares betray the Order of the Illuminati.

Sign of the Fellow Craft, or Second Degree. Notice the right hand position on the breast with the fingers crooked in somewhat of a loose “fist.” After both arms are in the position shown the left hand is quickly dropped.

Duncan’s Masonic Ritual and Monitor (id. Ed., p. 16) says: “In making the due guard and sign of the Fellow Craft, or Second Degree, care must be taken to drop the left arm suddenly and with spirit, as soon as the two motions are accomplished.” 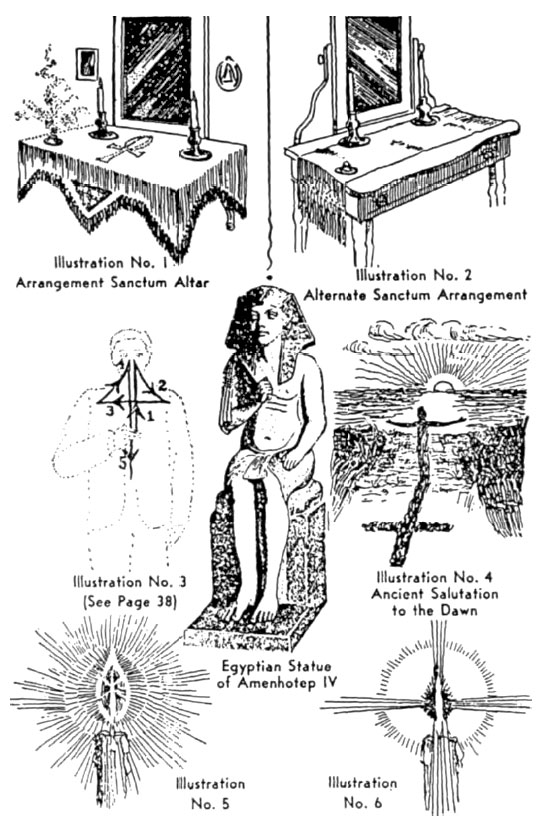 Page from a Rosicrucian manual. In the center is an Egyptian statue of Pharaoh Amenhotep IV giving the hand and arm sign later adapted by Freemasonry. 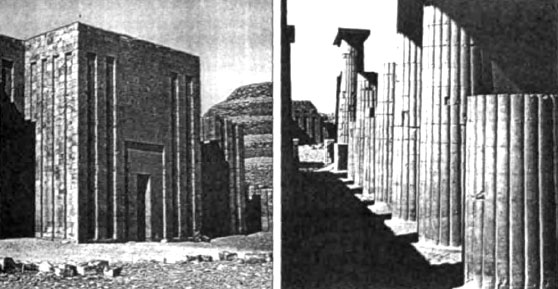 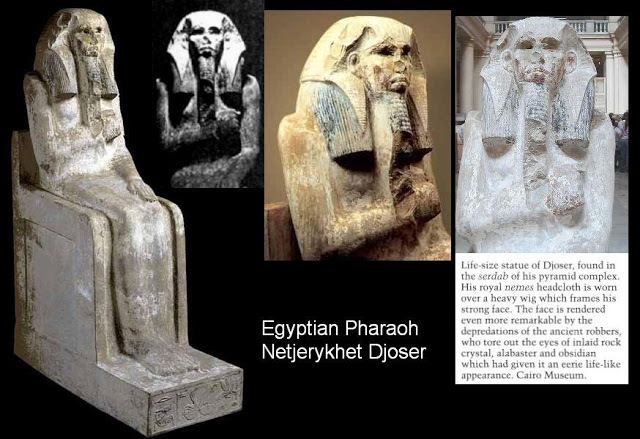 Enclosure walls of Pyramid with statue of Pharaoh Netjerykhet Djoser. 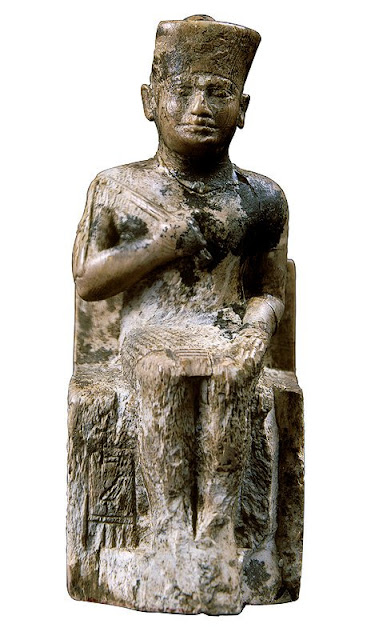 Statue of Cheops, or Khufu, thought to be the builder of the Great Pyramid of Giza in Egypt. (Photo: from The Riddle of the Pyramids, by Kurt Mendelssohn) 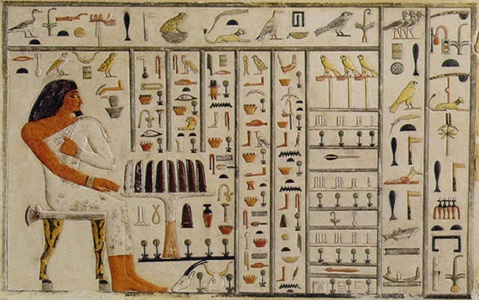 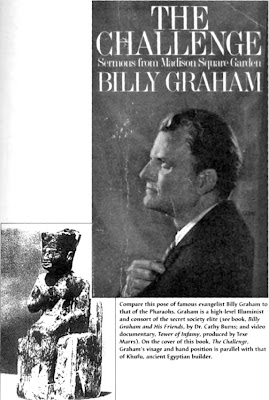 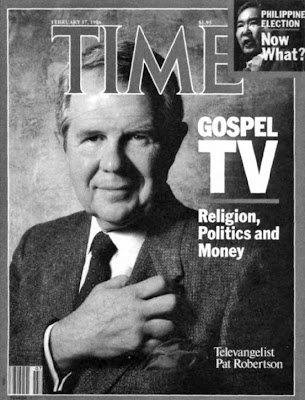 Illuminati servant Pat Robertson, founder of CBN and The 700 Club, giving his, by now, notorious Masonic sign on the cover of Time magazine, February 17, 1986. Robertson went on after this magazine’s publication to become a big star in Republican Party politics. Interestingly, Robertson was ordained for the ministry at a Norfolk, Virginia, church named, appropriately, the Freemason Street Baptist Church. In the author’s opinion, this cover of Time is clearly a staged event, and both the publisher and Robertson full well knew what they were doing. Robertson has long been allied with the Vatican’s Sovereign Military Order of the Knights of Malta (SMOM). His father, as a U.S. Senator from Virginia, was chairman of the Senate Banking and Currency Committee. 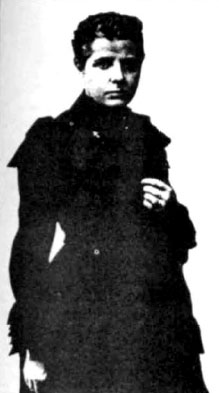 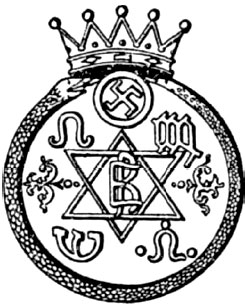 Annie Besant, a Co-Mason (women’s branch) took over the Theosophy cult at the passing of Colonel Olcott. The logo of Theosophy is blatantly occultic, combining the crowned Oroboros serpent with both the Jewish Star of David, or six-pointed star, and the encircled swastika. 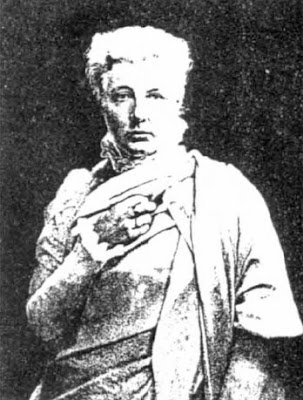 Another photo of theosophist Annie Besant giving the sign. Besant, like her mentors, Colonel Olcott and Russian mystic Helena Blavatsky, believed in the “pure doctrine” of Lucifer, which they called the perennial philosophy and the “Secret Doctrine.” 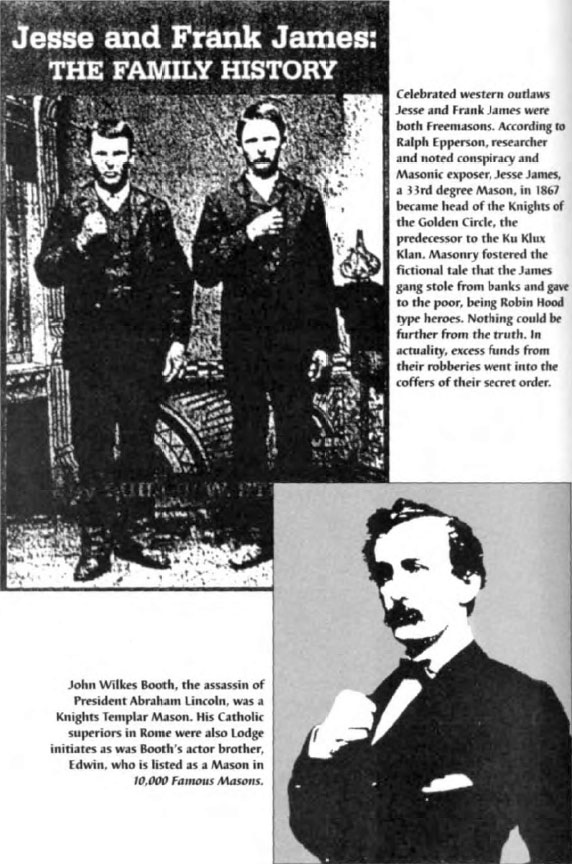 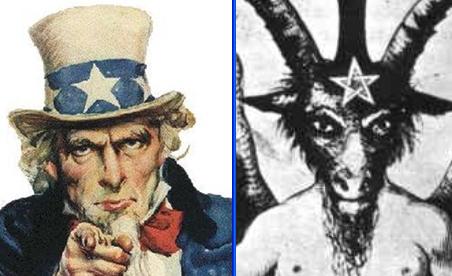 Ever wondered why “Uncle Sam” wears the satanic goatee beard? 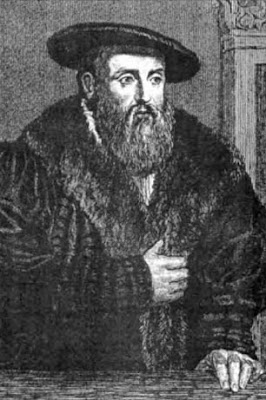 Johannes Kepler (1571-1630), a German astronomer and mathematician who taught the numerological philosophies of Plato and Pythagoras that were adopted by the Illuminati. (From the book, Sacred Architecture, by A.T. Mann, Element Books, 1993) 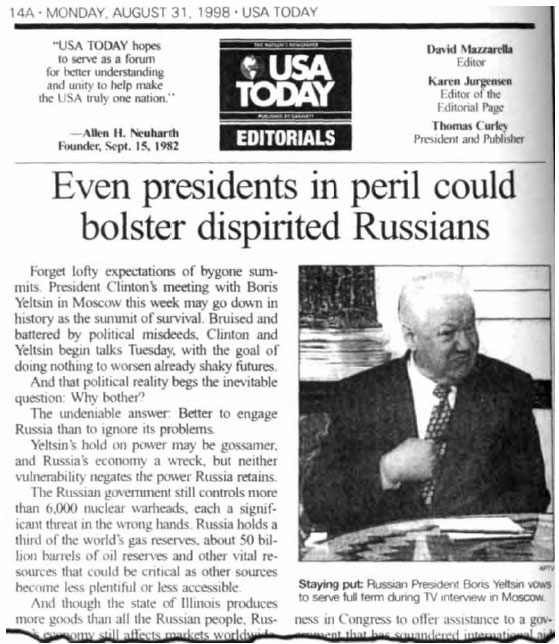 Russian President Boris Yeltsin was known to be a dupe of Jewish Illuminati interests. Following the fall of the Iron Curtain, these Illuminati Jews carved up Russia, seizing every asset of value and leaving the everyday Soviet citizenry in desperate economic straits. Yeltsin, a hopeless drunk, shows his loyalty to Illuminist interests with his clenched fist Masonic pose. 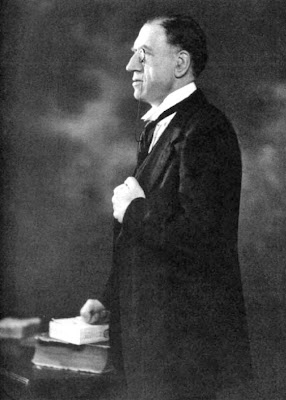 England’s Sir James de Rothschild, of the fabulously wealthy Rothschild Dynasty, about 1935. The books he has his clenched right fist on are believed to be mystical cabalistic texts. (Photo: From book Waddesdon Manor ~ The Heritage of a Rothschild House, by Michael Hall, photo by John Bigelow Taylor, Harry N. Abrams, Inc., Publishers, New York, 2002) 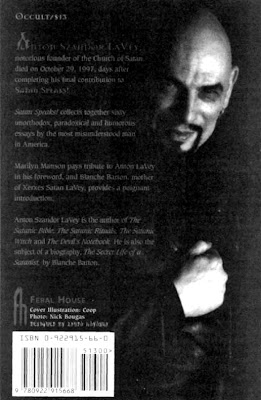 Anton Szandor LaVey, founder of the Church of Satan, from the back cover of his book of essays, Satan Speaks. LaVey died on October 29, 1997 just days after completing the manuscript of this book. Satanist rock star Marilyn Manson wrote the foreword. (Satan Speaks, by Anton LaVey, Venice, CA: Feral House, 1998) 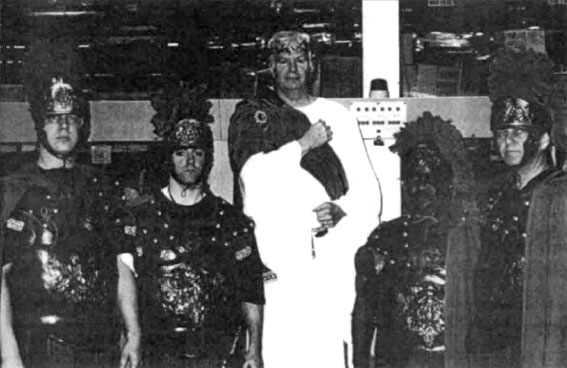 A stage/production of the classic, “Caesar,” demonstrates the similarity of the Roman Emperor’s arm and hand position to that of the Masons’ sign. 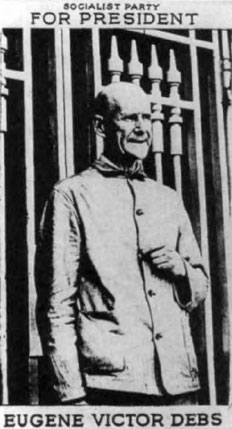 Labor leader Eugene V. Debs ran for president five times on the Socialist Party ticket. His best showing was in 1920 when he received almost six percent of the votes cast.
Bookmark the permalink.