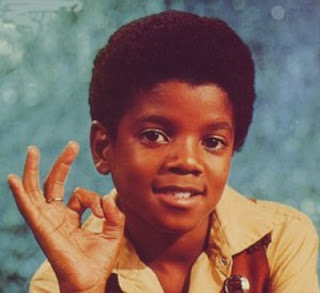 “Annuit Coeptus” ~ . He approves our undertaking. ~ Latin inscription atop the all-seeing eye on the U.S.A. one dollar bill

Westerner s know it as the “okay” (or “OK”) sign. It’s done with the fingers and thumb of right or left hands (usually the right). Simply touch the index finger to the thumb, creating a circle. The other three fingers then spiral off and there you have it ~ the well-known symbol for OK. Universally, this sign means alright, acceptable, good, right-on, you bet!, A-OK, satisfactory.But to occultists, the OK sign takes on darker significance. First, we have the circle, indicating the sun deity and the Mason’s never-ending quest for more light. To Freemasonry, the circle also represents the female genitalia, or yoni. In the Hindu religion, the OK sign is a revered mudra (sacred gesture) meaning “infinity” or perfection. It is associated with the female genitalia ~ thumb and forefinger pressed together at the tips with the other three fingers extended. 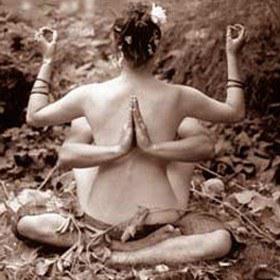 In the practice of tantric yoga (sex rituals), the OK sign is a token of ecstasy, spiritual and physical. In ancient Sumeria and Persia, charms and amulets have been discovered of fingers and hands in the modern OK position, joined along with horns implying fertility. The three fingers extended outward are symbolic of ecstatic union with the Goddess, the third member of the pagan trinity.In Satanism, when making this sign the three fingers not used to make the circle are considered symbolic of the unholy trinity ~ horned God, Goddess, and offspring (antichrist). Some go so far as to adopt the view that the bent three fingers are shaped as three number six’s, or 666. Thus, we have 666, the sun deity (Lucifer), the Goddess (Mystery, Babylon the Great, Mother of Harlots), and the beast (antichrist, 666), all in one unitary hand sign.
Oh what a web of evil wicked men can weave around something seemingly so ordinary and mundane. 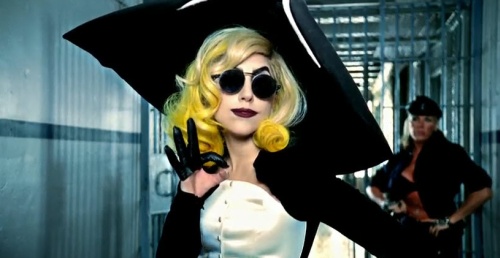 In the Illuminist philosophy, the OK sign becomes a sign indicating approval of the Divine King, their coming Lord of Light, whom we as Christians know as antichrist. To them it means, “He approves our undertaking.” This meaning is roughly equivalent to the words in Latin atop the all-seeing eye of Osiris on our U.S. one dollar bill ~ Annuit Coeptus.

A Gesture to Avoid?
As we’ve noted, the gesture made by touching the tips of the thumb and index finger to form a circle, with the remaining three fingers of the hand fanned out and pointing out may signify “A-Okay” in the U.S.A., but in other cultures the same gesture will certainly not meet with approval.In Brazil, Germany, and Russia, the signal is a supreme insult and vulgar, indicating a very private body orifice.In France, the sign portrays the person it is aimed at as being a flunky or a “zero” ~ basically a worthless person. When it’s placed over the nose it means he or she is drunk.

In Japan, the same sign is used in commercial transactions to indicate you want the cashier to give you your change in coins rather than in currency.

In Spain, in Eastern Europe, and in some parts of Latin America, the OK hand gesture is considered very rude. When then Vice President Nixon visited Brazil in the 50s, a crowd of onlookers became a rampaging mob after Nixon flashed them what he thought was the A-Okay sign. To them, Nixon was making an obscene gesture. Nixon’s “goodwill” trip suddenly became a “badwill” trip.

And there’s more confusion abroad: In Arab countries, making this sign while shaking the hand symbolizes the giving of the “evil eye,” perceived by Arabs as an event of great dread. It may be interpreted that you are putting a curse on the individual. Could it be that the Arab interpretation of this sign is exactly what the Illuminati intend in their performing it? 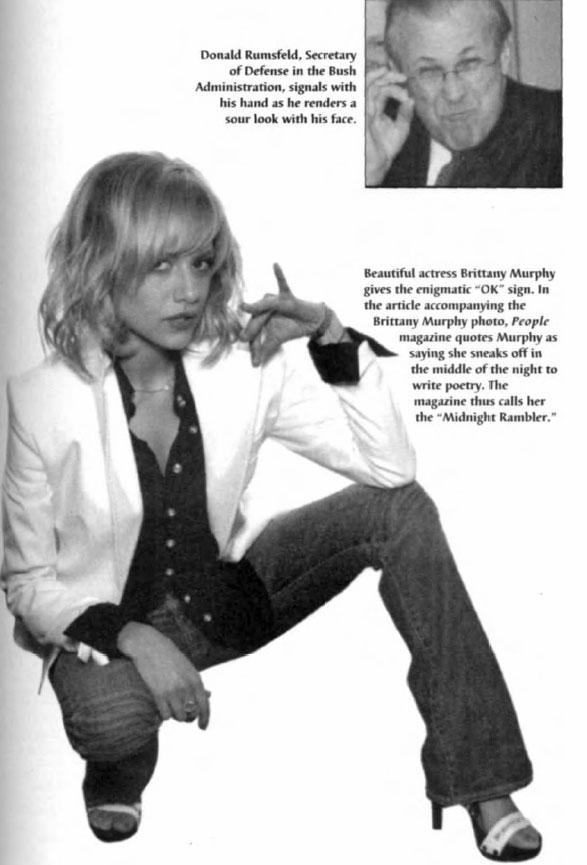 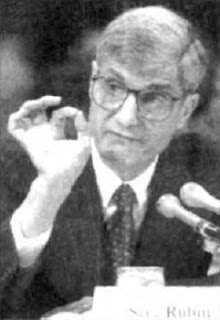 Robert Rubin, Secretary of the Treasury in the Bill Clinton Administration. (Photo: Austin American-Statesman newspaper, May 16, 1999) 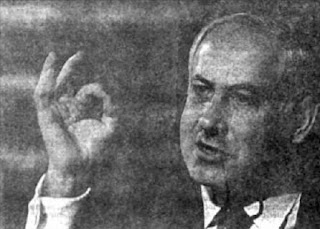 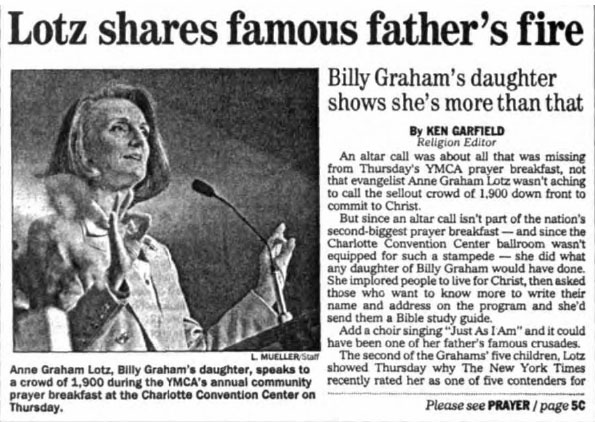 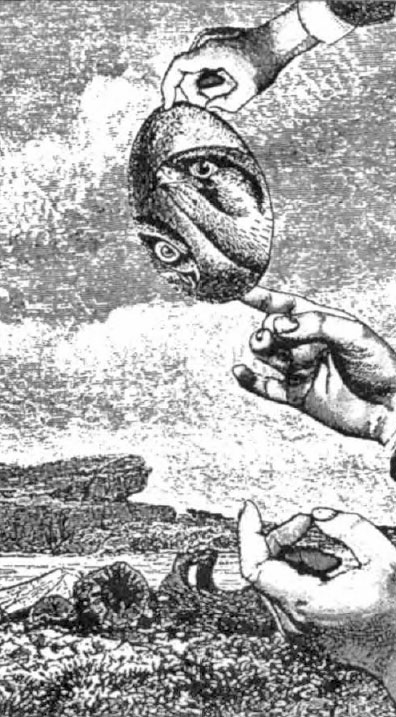 This drawing by an anonymous artist is very revealing it its carefully crafted symbology. We see at top and bottom the Illuminati’s “OK” sign. Then, mere’s the oval-shaped “egg,” the “El Diablo” devil’s horns, the two dialectic birds. 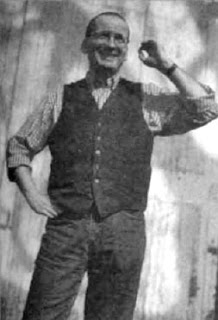 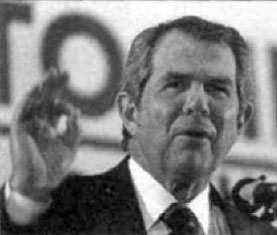 Pat Robertson, Mason, Illuminist, Knight of Malta, and elite propagandist in the field of religion. 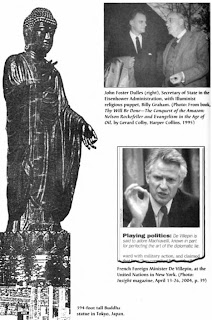 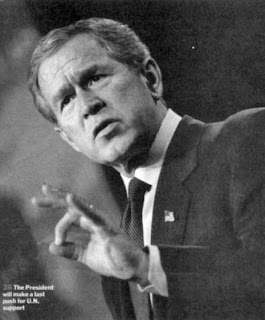 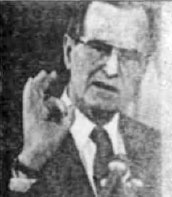 President George Herbert Walker Bush, has often been seen giving the Illuminati’s mudra, known by masses as the “OK.” 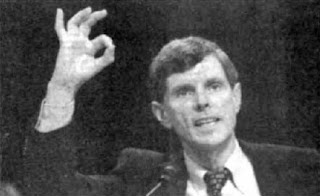 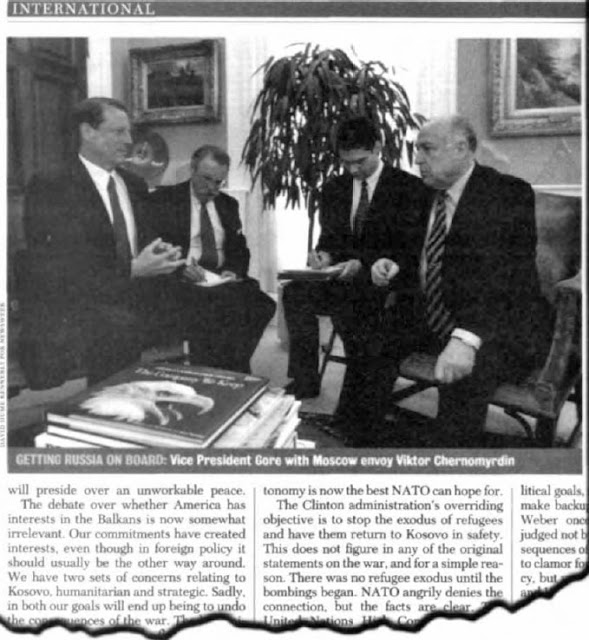 Vice President Al Gore (left) and influential Moscow envoy and fellow llluminist, Viktor Chernomyrdin. Chernomyrdin, a crypto-Jew and Mason, oversaw the redistribution of assets of the old Communist Soviet State in the hands of Jewish oligarchs. This was a prime llluminati project in the late 1980s and 1990s. Symbols expert Dr. Cathy Burns, in reviewing this photo, remarked:

“Not only are hand signs important in the occult, but other features in a picture can also have a symbolic meaning.” 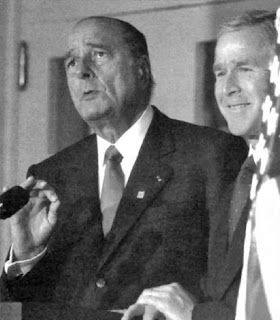 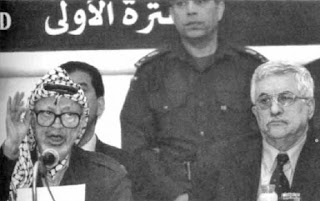 The PLO Chief Yasser Arafat with his current-day successor, Mahmoud Abbas. Both men were Masons, and both were tools of the CIA and Mossad. 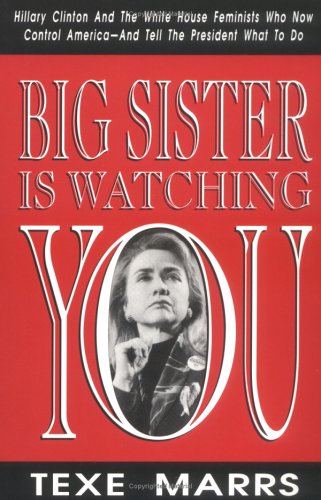 This cover of one of the author’s bestselling books illustrates the former First Lady wearing an “angel pin” with wings crossed in an Osirian X.
Her right hand is formed in a circle. 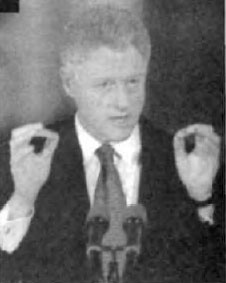 President Bill Clinton with a double circle sign, to emphasize his point. The headline reads “Clinton goes on offensive against Starr…Alleged sex scandal won’t make him resign, President says…”
Clinton’s hand signal indicates that his Illuminist superiors had decided to let him stay in office and not be ousted through impeachment conviction due to the Lewinsky sex/perjury scandal charges brought by special prosecutor, Kenneth Starr. (Austin American-Statesman, February 7, 1998, p. 1) 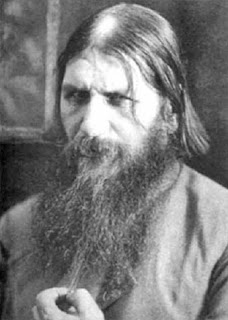 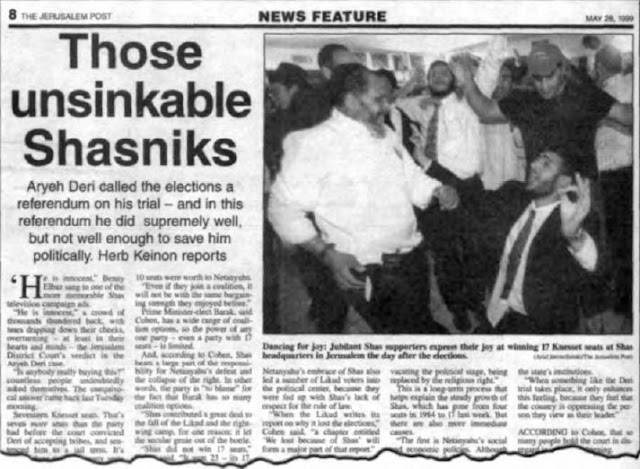 Jubilant supporters of Israel’s hard-core Shas political party dance for joy after the victory of winning many disputed seats in that country’s Knesset (parliament). (Photo: The Jerusalem Post newspaper, May 28, 1999, p. 8) 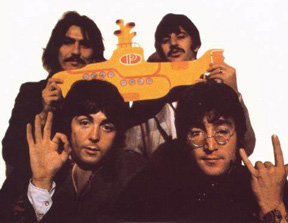 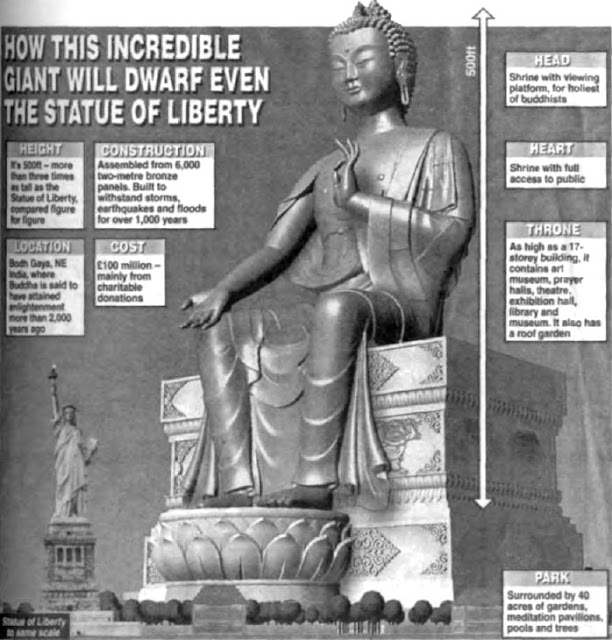 In London’s Daily Mail newspaper (July 6, 2000, p. 9) was this report of a giant S00 foot high bronze Buddha statue, called the Buddha Maitreya, in the Indian holy city of Bodh Gaya.
The statue will be over three times higher than the U.S.A.’s Statue of Liberty. It is being built by British engineers. Observe the Buddha statues mudra, or left hand sign. Also, the “horns” on the head. 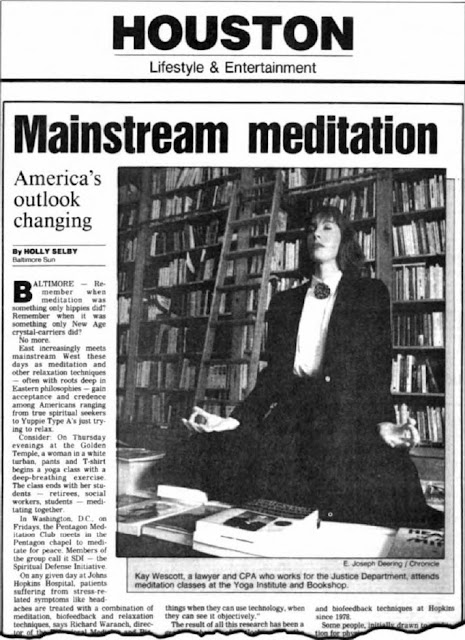 “Kay Wescott, a lawyer and CPA who works for the Justice Department, attends meditation classes at the Yoga Institute and Bookshop.”

Yoga is very popular in the United States, though most do not understand that the yogic positions of hands and body represent Hindu pagan religious symbols and doctrines.
In this instance, Ms. Wescott sits in the upright position, legs crossed lotus-style, her hands in the mudra “OK,” or circle. 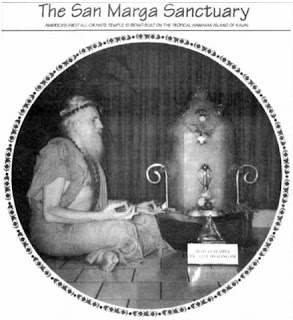 A Hindu swami and worshiper of the GodShiva at the San Marga Sanctuary in Hawaii. He is accompanied by a strange paper idol and a brazen cobra idol. 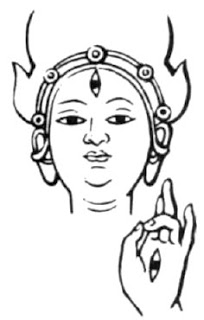 Buddha displaying the left-hand “OK” mudra. This drawing is from The Herder Dictionary of Symbols (Chiron Publications, Wilmette, Illinois, 1986).
That reference source explains it as “an eye in the hand of God signified God‘s creative wisdom.” Of course, this is not referring to the Christian God, but to the ineffable, unknown God called Ain Soph in the Cabala and as the evil, satanic “God of Forces,” in the Bible’s book of Daniel. 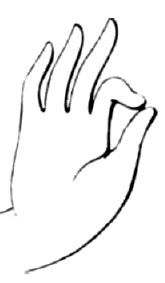 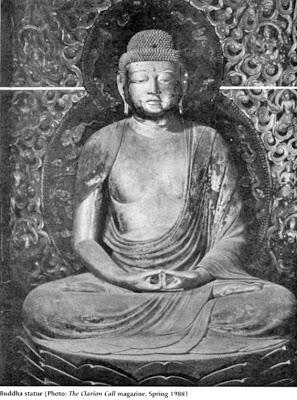