THE MEROVINGIAN DYNASTY, THE PRIORY OF SION, AND THE SPEAR OF LONGINUS 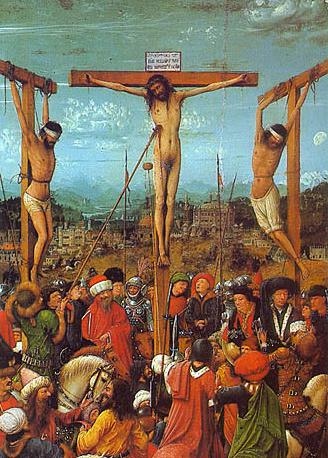 The Priory of Sion(also the Prieure de Sion) is said to be the “secret society of societies.”1
Baigent, Leigh, and Lincoln, authors of one acclaimed book, Holy Blood, Holy Grail, write that the brotherhood of the Priory of Sion has been preserved for two millennia.
France’s royal Merovingian Dynasty’s bloodline is said to be the protector of the sect, which boasts that it is the actual bloodline of Jesus. The astonishing claim is that Jesusand Mary Magdalene were married and had children and from this bloodline shall someday arise a man who shall become the ruler of planet earth.

The Holy Grail
Tied in with this unscriptural ~ even blasphemous ~ legend are the tales of the Holy Grail and the Spear of Longinus. Some teach that as the blood of Jesus oozed from his body on the cross, it was collected in the Holy Grail cup. Esoterically that would make the Holy Grail, if it exists, magical and capable of great miracles.

A variation of this story is that the Holy Grail was the drinking vessel of Jesusat the Last Supper, which again would translate into the cup being a magical talisman.

The Spear of longinus

The Spear of Longinus is yet another legend connected to the Priory of Sion. It holds that a Roman Centurion named Longinus was the one who thrust his spear into Jesus‘ side at the crucifixion. Some of Jesus‘ blood is alleged to have fallen on him and miracles ensued. Thus, again, a magical talisman was created ~ the Spear of Longinus.

Throughout history wicked tyrants, including Napoleon and Hitler, have sought possession of the Spear, believing that it is the Spear of Destiny and that whoever possesses it shall have the power to rule the world.

William Cooper, whose book, Behold a Pale Horse, and his revelations on his national radio program so angered the elite they put out a contract on his life, sometimes mentioned the Spear of Destiny.2

Cooper was murdered by a combined federal-local police team that ambushed him as he peacefully stopped his pickup at a stop sign on his way home from a grocery store. In his book, he spoke of how vital the Spear of Destiny is in the Illuminati scheme of things:
According to members of the intelligence community, when the New World Order is solidified the relics will be taken out, will be united with the Spear of Destiny, and will, according to legend, give the world’s ruler absolute power.

Again, I remind you that it makes not one iota of difference what you believe. If they (the Illuminati) believe, you will be affected.3

The Spear As Pentagram and Lightning Bolt
The Spear is a symbol of long-standing repute in the pagan and ancient Mystery Religions. In the Egyptian religion, it was called the Arrow of Re, or Ra, the Sun God, who was also called Horus, son of Osiris and his reincarnation, who had the all-seeing eye.
Anton LaVey, in his book Satan Speaks, notes that the Sign of the Spear is actually the inverted pentagram.4 In turn, the pentagram (the satanic five-pointed star), according to LaVey represents,
“Excalibur, the Spear of Destiny, Wotan’s spear point, the lightning bolt that created the protoplasm of life.”5
The Rosicrucians and the Sign of An Arrow
Moreover, the Rosicrucian Order seems to be somehow connected with both the legend of the Spear and the Priory of Sion. D. C. Yermak, writing in The Axis of Death – Vatican, Masonry, Zionism, Enemies of God, explains that,

“The Rosicrucians, by making their secret sign with the first three fingers of the right hand united, make the Sign of an Arrow.”6

The Rosicrucian’s Sign of an Arrow is dark and evil because it is used by the individual to remove himself from God‘s Blessing and leave himself purposely exposed to the arrows of the devil. (In this case, the form, or shape, relates the arrow to the spear).

Dean Grace, authoritative researcher in symbology and Masonic secrets, believes that at least some modern-day disciples of this international black lodge, Priory of Sion, communicate their involvement to other hidden members by giving the Sign of the Spear Point.7

In this sign, the point of the spear can either be sharply angular or it can be modified. Often, the fingers are positioned so that the horns and face of Baphomet are indistinctly seen, as in the inverted pentagram star.

Grace’s research also indicates the Priory of Sion is either linked or had something to do in the development of other, related occult groups such as the Order of Knights Templar.

“The spear point symbol,” he says, “is the building block of the four-spoked, eight-pointed Maltese Cross of the Order of the Knights of Malta.”8 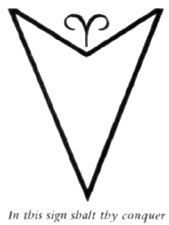 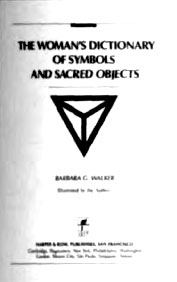 How the Sign is Given
A variation of the sharp, angular spear point sign is that displayed in this chapter of Codex Magica in the photos of ABC News reporter Sam Donaldson and U.S.A. Vice President Dick Cheney. However, their modified hand and finger positioning is likely simply a personal eccentricity. As in all cases of secret hand signs, human variation and personality intervene, so that not all the signs are rendered expertly and in a crisp, uniform, standardized fashion.

When placed in or near the female vulva area or the male genital area, the spear point becomes a phallic symbol. In all cases, the sign of the spear point is given so that the Y, the spear or arrow, is pointing downward, toward the nether regions where, presumably, Satan and his legions reside. That is, toward the pit of hell.

Title page of Barbara Walker’s The Woman’s Dictionary of Symbols and Sacred Objects. Inside, Walker identified the symbol shown as the Dragon’s Eye. She reports that the Dragon’s Eye forms a triple triangle, sacred to the Goddess, and that this symbol appears often in medieval books of magic, to invoke the protection of female spirits and entities.

In fact, the Dragon’s Eye bears a remarkable resemblance to the Sign of the Spear Point, and the name Dragon’s Eye is appropriate, indeed.

Symbol from the back cover of the fascinating book, The Talisman of the United States: The Mysterious Street Lines of Washington, D.C., by Charles Westbook, Ph.D. (1990).

The symbol depicted is a spear point superimposed by a modified fleur de lis, a symbol of the Merovingian royal dynasty. 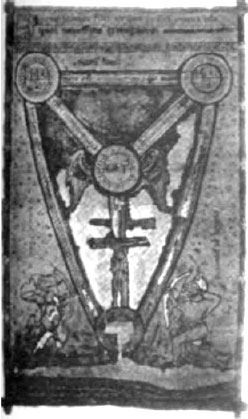 “Shield of the Trinity,” in the British Museum, which turns out to be an emblem of the Priory of Sion. 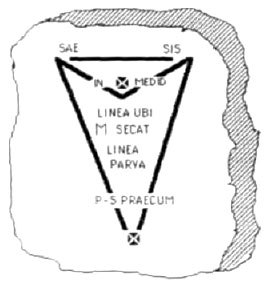 Drawing of the Rock of Sion and the Sign of the Priory of Sion. (From the book, Holy Blood, Holy Grail) 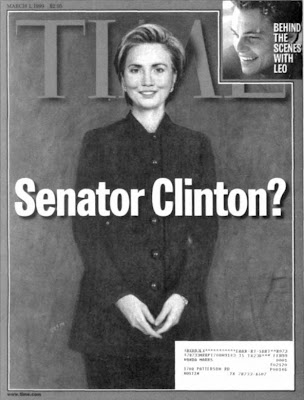 First Lady Hillary Rodham Clinton, wearing a “Mao Tse Tung” peasant outfit and fashion look, clearly giving the Baphomet/Priory of Sion sign. This cover and feature article in Time (March 1, 1999) examined Hillary Clinton’s possible candidacy for the U.S. Senate from the state of New York in the upcoming election (2000).
In fact, Ms. Clinton ran and won. Was the symbology displayed (Priory of Sion Sign) predictive of her future successful run?
Said by political analysts to be one of the most important addresses of his political career, in late August 1998, President Bill Clinton went on national television to give a limited mea culpa (“I am sorry”) for his sexual indiscretions with the young White House intern, Monica Lewinsky. 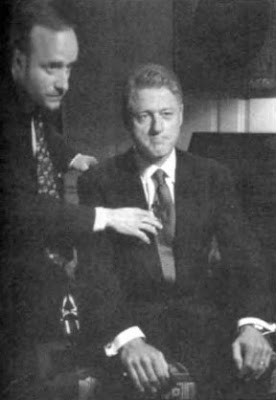 Above: A chagrined, frustrated, and angry Bill Clinton readies himself for the camera shoot, with the aid of an associate. Below: Just moments before the TV cameras roll, Clinton sets his face in a sober, resolute attitude. With his Baphomet/Priory of Sion hand sign, he invokes success and blessings from the ruler and forces of darkness. (Above photo: Newsweek, August 31, 1998, p.3; Below photo: The European newspaper, August 24-30, p.3) 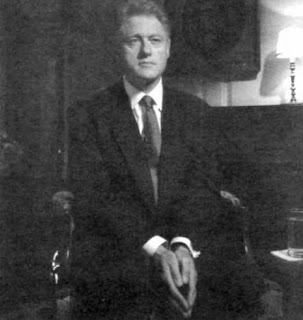 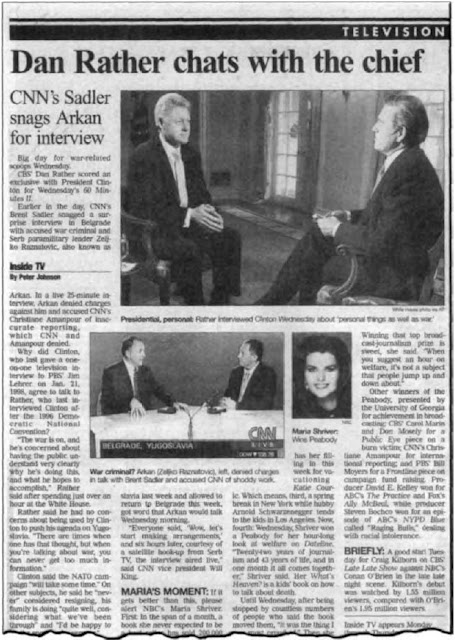 In yet another Clinton bit of magic, President Bill Clinton gives cabalistic sign (Baphomet/Priory of Sion spearpoint) while being interviewed in late March 1999, by CBS News anchor Dan Rather. The USA Today newspaper’s editors apparently complied with elitist’s request to give maximum publicity to Clinton’s interview and to this particular photo.
Subject of this interview was the U.S. war against Yugoslavia/Serbia, a key Illuminati project to help usher in their New World Order. Clinton invokes the forces of darkness to assist his speech and enhance his hypnotic persuasive powers over the American people. 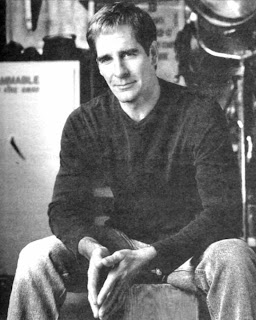 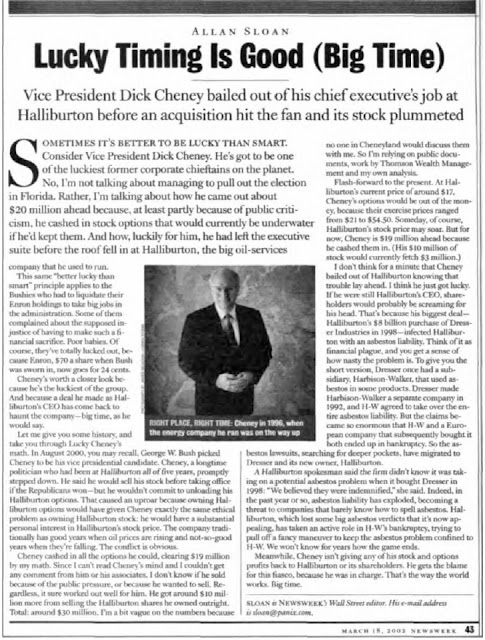 Vice President Dick Cheney. His wife, Lynn, is a writer of steamy lesbian sex novels. His daughter is an avowed Lesbian, and Dick? Well… this photograph is rather telling. 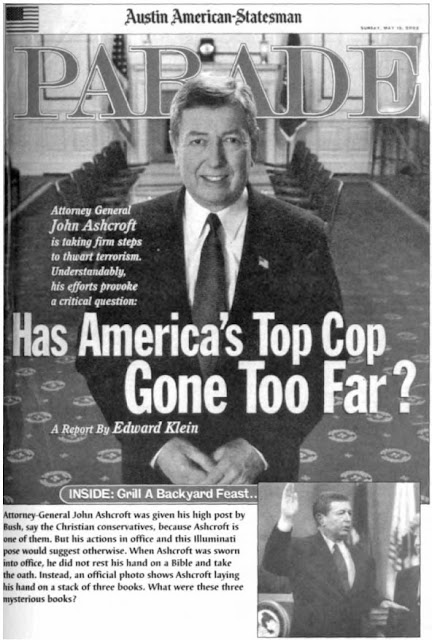 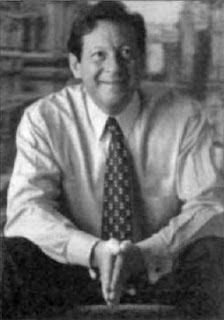 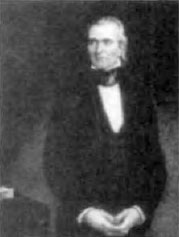 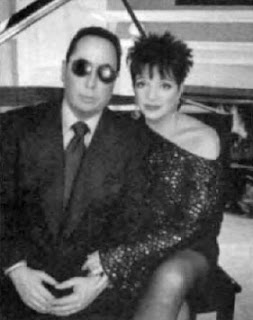 Producer David Gest and wife, singer Liza Minelli. Gest, a homosexual, and Minelli are now separated and seeking a divorce. 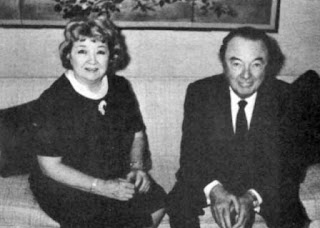 Actor Jack Bolger, who played the Tin Man in the classic alchemical drama, The Wizard of Oz, with wife, Floe, at home in Beverly Hills. 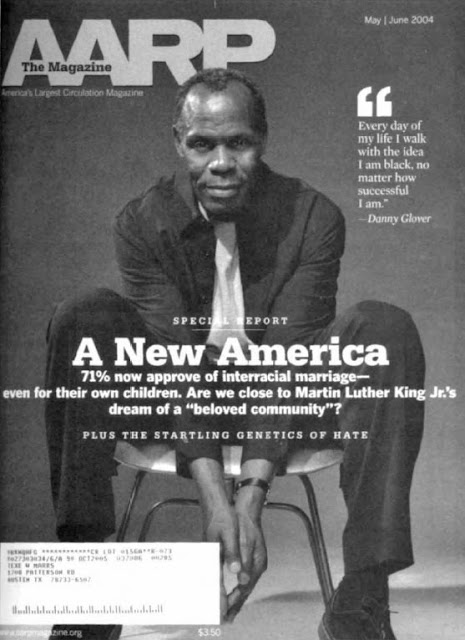 Actor Danny Glover, notorious for his Marxist liberal political activism, sends a cabalistic message through the medium of AARP magazine, also known for its Marxist and Jewish agenda. Glover is signaling deep occultic spirits to empower his quest. 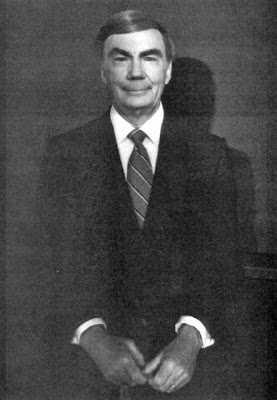 Sam Donaldson’s face has been a staple for many years on ABC News. But here, in this photo in Smart Business magazine, it is Donaldson’s hands we should pay attention to.
This full page shot of Sam Donaldson had no caption and no explanation. Obviously, it was staged for the sole benefit of those who know. 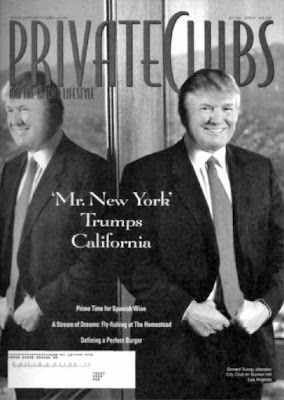 Impresario Donald Trump demonstrates his knowledge of the Illuminati’s cabalistic Baphomet/Priory of Sion hand sign in the ad (left, above) for his successful TV series, The Apprentice. Then, in the glossy mag Private Clubs, June 2004, read mostly by wealthy members of elite country clubs. Trump is shown three times, once on the cover and twice inside, in cabalistic poses. Analysis: At center, above, Trump’s necktie and hands create a sexual “diamond in the lotus” position, with three triangles.
The magazine cover photo at left includes the mirror factor, the message being that there are two Trumps, the esoteric, private “Illuminati Trump,” and the outgoing and extroverted “Public Trump.” Finally, at top, right, we also are shown a serious Donald sitting and giving the required cabalistic triangle sign with both the fingers and thumbs of both hands touching. This is a common sign of recognition among Illuminati. 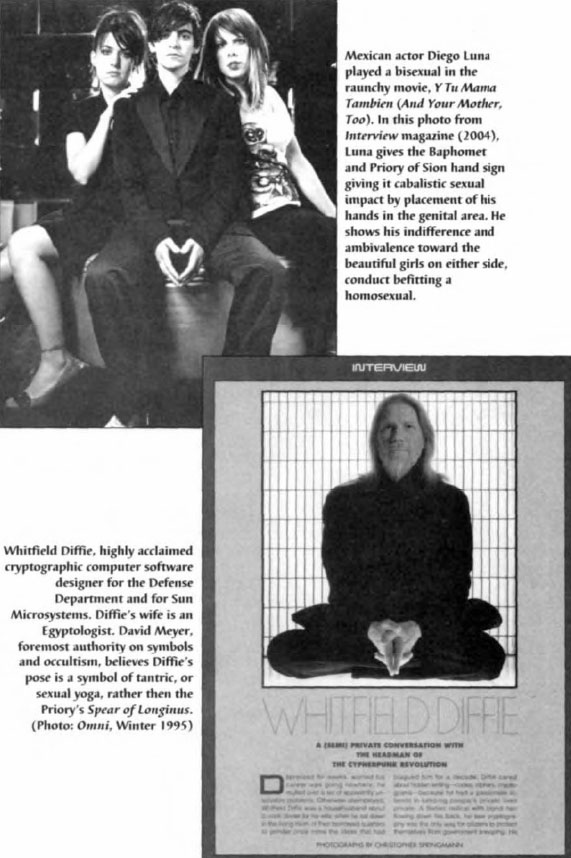