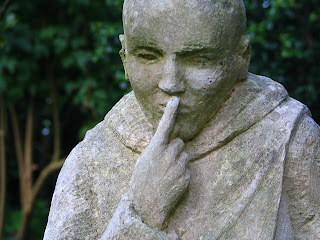 In every ritual degree of Freemasonry and in all the most important ceremonial rituals and initiations of elite orders, the candidate is required to take an oath and is warned of the hideous and grotesque penalty that awaits him if he dares ever to reveal any of the group’s innermost secrets.1
For example, in the very first degree oath of Freemasonry, the candidate declares:

…binding myself under no less penalty than that of having my throat cut across, my tongue torn out by its roots, and my body buried in the rough sands of the sea, at low-water mark, where the tide ebbs and flows twice in twenty-four hours, should I ever knowingly violate this my Entered Apprentice obligation.

…binding myself under no less penalty than that of having my breast torn open, my heart plucked out, and placed on the highest pinnacle of the temple there to be devoured by the vultures of the air, should I ever knowingly violate the Fellow Craft obligation.

…binding myself under no less penalty than that of having my body severed in two, my bowels taken from thence and burned to ashes, the ashes scattered before the four winds of heaven, that no more remembrance might be had of so vile and wicked a wretch as I would be, should I ever, knowingly, violate this my Master Mason’s obligation.

That’s not all.
In the 4th degree, Mark Master of the York Rite, the candidate performs a ritual which symbolizes having his “ear smitten off” if he reveals the order’s secrets.
And for the 5th degree, Past Master, the hapless candidate agrees as follows:

…binding myself under no less penalty than (in addition to all my former penalties) to have my tongue split from tip to root, that I might thereafter be unable to pronounce the word.

The sixth degree (Most Excellent Master) of the York Rite continues with the horrific penalties:

…binding myself under no less penalty than to have my breast torn open, and my heart and vitals taken from thence, and exposed to rot on the dunghill.

The Sign of Silence
Illuminists have a sign to be used to remind associates when it is needful to stonewall or to shut up about a matter. In the York Rite initiation for the Royal Master’s Degree, this sign, called the Due-guard, “is made by placing the forefinger of the right hand upon the lips.”2
Richardson’s Monitor of Freemasonry remarks that this sign “is a caution to a companion when you wish him to keep silent.”3

In the ritual degree ceremony of the Secret Master, the candidate places two fingers to his lip and is told that the obligation he is taking

“enjoins secrecy and to obey the orders and decrees of the Council of Princes of Jerusalem, under penalties of all former degrees.”4

For the fifth degree (Past Master) the penal dueguard sign is the placement of the thumb to one’s mouth, again indicating the warning to keep silent. 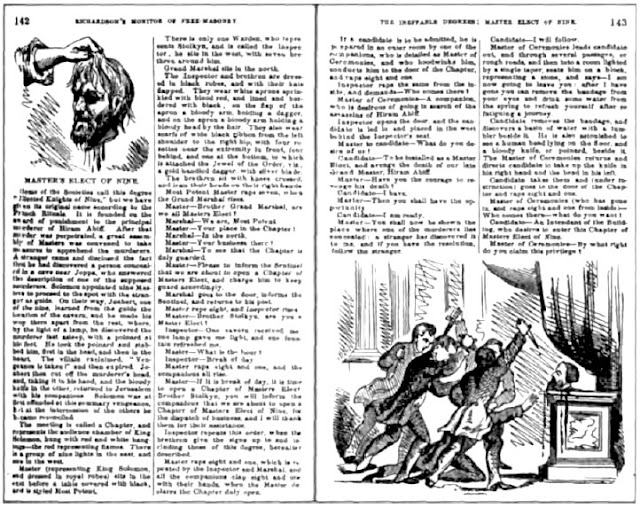 Richardson’s Monitor of Freemasonry (pp. 142-143) provides these bloody reminders of the horrible penalties that await the Mason or other elitist who divulges secrets of the Order. “Silence, Slaves” is certainly the catchword for the submissive servants of Satan’s earthly elite corps of leaders.

A Softening of Penalties?
Freemasonry and many other secret societies have been under siege in recent years as the author of Codex Magica and a number of other courageous men have boldly come forward exposing the frightening, cold and bloody oaths taken by millions of Masons around the globe. As a consequence, as I understand it, the leadership of the Lodge and other groups has more recently begun to “soften the edges,” so to speak and to eliminate some of the more egregious and ghastly phrases and words used in the rituals.

Kleinknecht explained to his lieutenants that this new guide provides “modified versions” of the seventh and twenty-seventh degrees which were originally created by Albert Pike, their much revered nineteenth century “Illustrious Sovereign Grand Master.”6 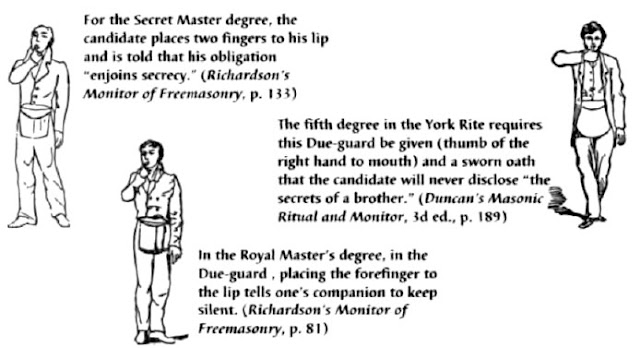 One can assume that to appease its critics, further editions of the ritual will water down the most grievous of the penalties.

Other ways, however, will undoubtedly be found to motivate the membership to keep the secrets, including banishment from elite status and possibly even the periodic assassination of disciples who stray and who recklessly disregard the dictate to retain secrecy.

Still it is of interest that the Masonic elite are embarrassed over being outed for their hideous oaths. What’s more, in the Mormon Church (LDS), the penalty portions of the Masonic-oriented rituals celebrated in the Temple also have recently been watered down somewhat.

The Masonic practice of signs warning of frightening penalties for breaking silence most definitely is of pagan origins. In Greece, Rome, Babylon, and Egypt, those who had loose lips often paid with their lives and fortunes, so sacred and guarded were the secrets of the Mystery Religions.

The Egyptians and Romans even worshiped a God of silence, Harpocrates, a form of the solar deity. Harpocrates was often pictured sitting on his mother’s lap, suckling at her breast. Later, the Catholic Church adopted similar images in the veneration of Mary with child. Sometimes Harpocrates was pictured naked or with horns on his head, symbols of power. He often sat on a Lotus flower. The Lotus is a sexual symbol of the female vagina.7

In the active days of Benjamin Franklin and our nation’s founders, their secret society counterparts in Great Britain made use of the God Harpocrates. Sir Francis Dashwood, instrumental in the British operation of the Illuminati, recruited nobility for his Hell-Fire Club, a secret group based on magic, satanism, and sex.
Numerous harlots—and sometimes newly deflowered virgins ~ were used by Dashwood and his occultic, jolly men. On club premises, the members erected a statue of Harpocrates, depicting him solemnly holding a finger to his mouth to remind the frolicking members of the Hell-Fire Club that, “What happens here, stays here.”8 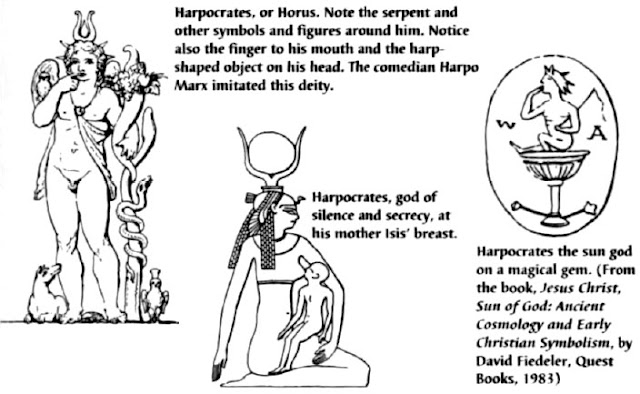 The Mystery Religions of the Romans and other peoples especially needed the utmost secrecy because, during the higher initiations, the unspoken names of the hidden or unknown God, or Gods, was often revealed. As the Christians gained in numbers and influence, they began to properly understand that these names were actually synonyms for Satan, Lucifer, the Devil. Great effort was therefore taken by pagans to obscure or prevent the unmasking of this satanic connection.10

An interesting side-note: As a child watching TV in the early days (1950s), one of the most popular programs was a game show hosted by Jewish comedian Groucho Marx. Groucho had a brother, Harpo Marx, who was also a comedian and starred in numerous TV programs and in movies. Harpo always played the cherubic character of a mute young boy, with blond hair in curls. In other words, Harpo was cast in the image of Harpocrates, God of silence and secrecy, also known as Horus the child. 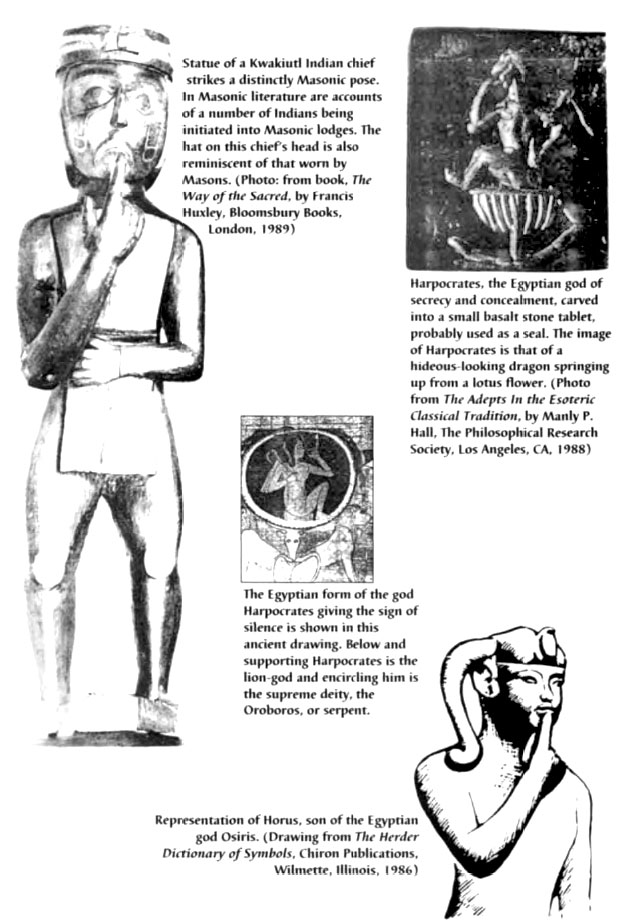 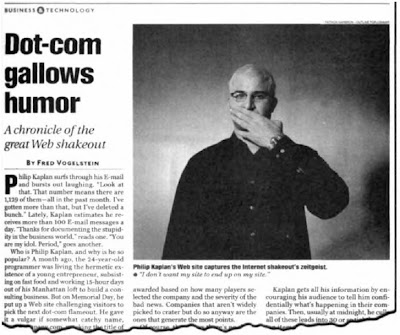 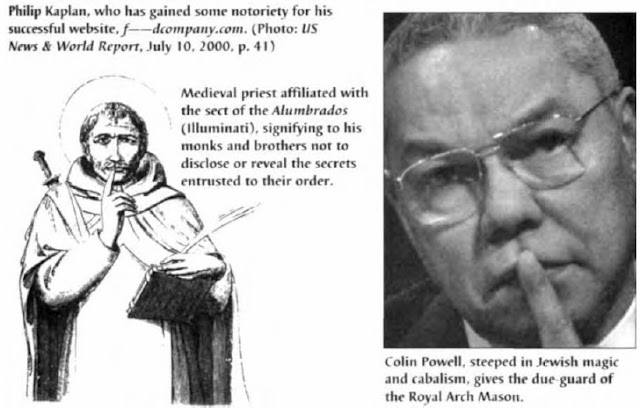 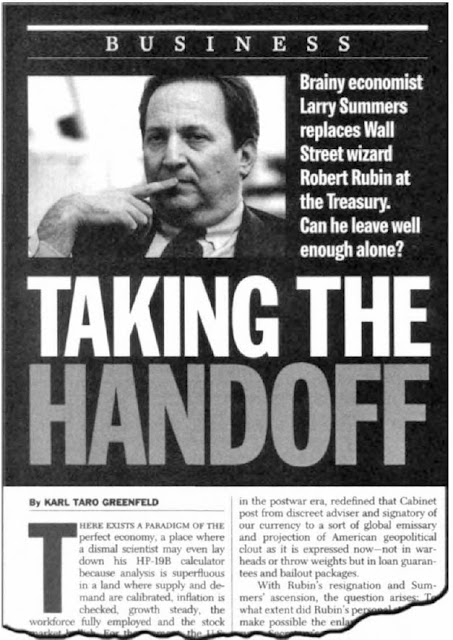 Lawrence Summers, President of Harvard University and former Secretary of the Treasury under President Bill Clinton. (Photo: Time magazine, May 24, 1999) 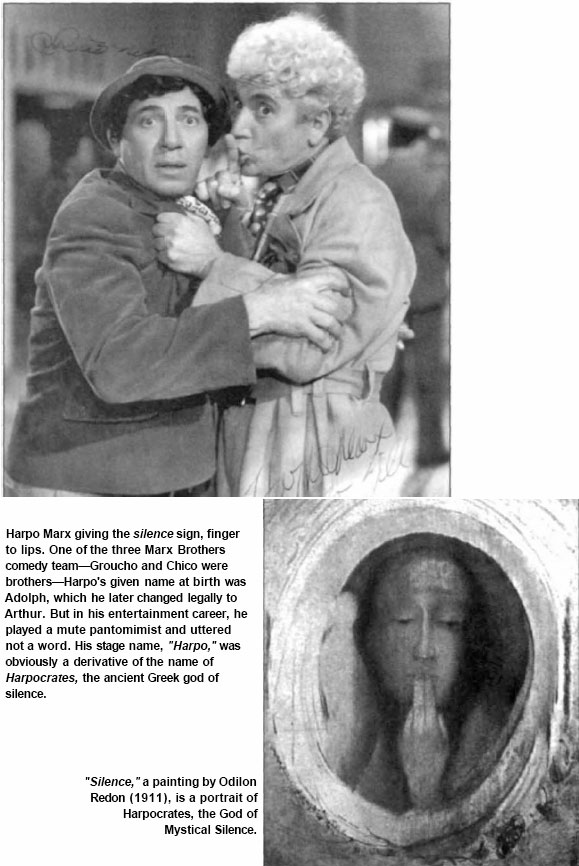 Harpo Marx giving the silence sign, finger to lips. One of the three Marx Brothers comedy team ~ Groucho and Chico were brothers ~ Harpo’s given name at birth was Adolph, which he later changed legally to Arthur. But in his entertainment career, he played a mute pantomimist and uttered not a word. His stage name, “Harpo,” was obviously a derivative of the name of Harpocrates, the ancient Greek Godof silence. 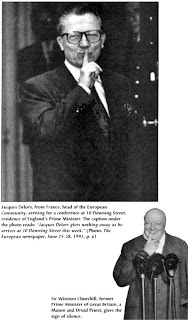 “Silence,” a painting by Odilon Redon (1911), is a portrait of Harpocrates, the God of Mystical Silence.
Bookmark the permalink.